It was about a month ago that I had posted a link of the week to a poll that the folks over at Tool Crib had posted a few years ago seeking to plumb the depths of the woodworking community – who were the three greatest influences in your getting started in woodworking?

After linking to the Tool Crib results, I was approached by the blog’s moderator to let me know that it had been a few years since the poll was conducted, and that it might be interesting to see if there had been any changes.  The follow on article launched the project, and, I am pleased to report that the results are in! I have compiled the list of those people or entities who received more than one vote each.

Without any further ado… 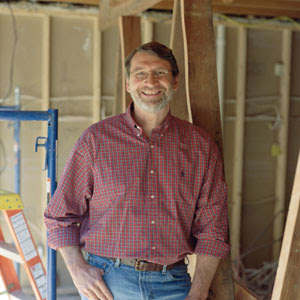 Norm Abram – 65 votes  The New Yankee himself.  Woodworking on TV since 1979 (on This Old House), the plaid-clad bespectacled one got the most votes of all. Many who voted cited Norm’s outstanding ability to communicate complex woodworking concepts and his  consistency.  In fact, Norm has inspired one full generation of woodworkers to get off their butts and get started in the craft.  My hat’s off to you, Norm!

Dad – 50 votes For many woodworkers, their first male role model was the reason why they got into the craft. Whether it was dad teaching his child the family trade or helping to carve out a winning Pinewood Derby car for the Scouts, dad consistently found his way to the top of the list.

Shop Teacher – 31 votes  While my dad did tinker with woodworking in the house, my first true hands-on experience with woodworking came as it did for many others – in a shop class.  After years of readin’, writin’ and ‘rithmatic, it was a pleasant surprise to be allowed to get my hands on the tools and do some woodworking.  Many thanks to the shop teachers who made it all happen.

Grandfather – 24  votes Whether from necessity (the have-to spirit of the Great Depression) or because of vocation, many woodworkers look back fondly at their grandfathers as a source of their love for the craft.

Roy Underhill – 19  votes A woodworker who has been doing the TV woodworking thing for about as long as Norm, Roy’s passion for hand tools and methods used before power tools became the norm showed the way for the current hand tool revival.

David Marks – 18  votes The calm, laid back delivery and the gorgeous curves are the hallmarks of David’s work.  His show Wood Works opened many eyes in the woodworking community and showed just how much fun it can be to play with design and materials.

The Internet and online communities – 14 votes  Woodworkers are intensely loyal to their online communities, and several minced no words when it came to touting the inspiration and assistance they find online.  This is what the early pioneers of the Internet hoped would happen, and it has manifested itself beautifully. Marc Spagnuolo – 12 votes  The Wood Whisperer has stormed onto this list like no one else has.  He’s taken his woodworking talent, gift for communication and technical savvy and has helped turned the Internet into a richer source of information for woodworkers around the world.

Friend/Neighbor – 9  votes “Hey, can I borrow your router table?” Whether they were the first people to guide you into woodworking or sold you your tools, friends and neighbors helped to pave the way for many who chose to respond.

Writers in books and magazines – 9 votes  Those magazines arrive edition after edition.  A trip to the library will show dozens of books to choose from. These authors who take an idea or project from their imaginations and put them into black and white have done their share of inspiration over the years.

Wife – 8 votes  “I promise to be true to you, in good times and in bad, when the glue ups go smoothly or when they seem to self-destruct…” At first, this came as a surprise.  But, then I realized that without the support, encouragement – and understanding – of my wife, my woodworking wouldn’t be where it is today.  Kudos to the better half!

Uncle/Aunt – 6 votes  Is there no end to the family connection?!?  Your parents’ siblings weren’t there just to get you riled up and leave your parents with the results – the proved to be valuable instructors and inspiration into the craft.

Sam Maloof – 6  votes  The late, great one.  Sam’s woodworking career spanned decades and helped to create a uniquely American style.  His furniture was beyond reproach, and his signature rocking chars will be sought-after cultural relics for generations to come.

Chris Schwarz – 5  votes  The  Editor of Popular Woodworking magazine, Chris is on his way to becoming a revered master of the craft.  His seminal work on Workbenches is a must read, and his leadership at the magazine continues to inspire hundreds of thousands of woodworkers each month.

Scott Phillips – 5  votes The host of the American Woodshop, Scott has offered his guidance for 15 seasons.  From furniture projects to the building of a custom wood shop, Scott has taken us on a very interesting ride and taught quite a bit along the way.

Charles Neil – 4  votes  Virginia-based woodworker Charles Neil has graciously invited woodworkers into his shop since launching his site in 1997.  An instructor, prolific blogger and a talented woodworker, Charles has led the way in demonstrating fine furniture building.

Jesus of Nazareth – 3  votes  The world’s most famous carpenter, several participants offered prayers of thanksgiving for their God-given talents and creativity. Looking at several of their projects, it’s easy to see their work is truly inspired.

Tage Frid – 3 votes  The Great Dane, Tage was a tireless instructor, bringing woodworking education to the homeowner through his books  and as an editor of Fine Woodworking magazine.

David Elsworth – 3 votes   Primarily a wood turner, Ellsworth’s work is exquisite in detail and form.  Bowls, vases, platters and other sculptural work come off David’s lathe in an impressive variety of sizes and materials.

James Krenov – 3 votes  A master in his own right, Krenov’s work has inspired countless woodworkers to achieve harmonious design and honest joinery.  His books, including the Impractical Cabinetmaker, describe his design and construction process in great detail – a treasure trove of ideas for aspiring woodworkers.

Hall Brothers – 2  votes The team which worked with Charles and Henry Greene produced much of their millwork and many of their furniture pieces.  You can see some pristine examples of their projects at the Gamble House in Pasadena, California.

What struck me were how many one-vote getters there were out there.  Notables such as Thomas Moser, Glen Huey, George Nakashima, Danny Proulx, David Charlesworth, Doug Stowe and so many others all showed in the results, but were mentioned by only one woodworker.  While this may sound shocking, it’s not surprising.  There are many talented woodworkers out there who reach in and inspire us all individually.  It’s actually a huge benefit to all of us to have a diverse group of inspiration sources to pull from.  That’s what makes woodworking so unique, exciting and interesting.

Now, there was one vote that wasn’t cast or counted in this poll… mine.  If I had to identify the three big influences in my woodworking, they would be:

Dad. I can still remember the period from 1982 to 1984 when we finished the basement in our home.  My dad taught me a lot about tools and how to get accurately fitting joints.  Thanks, Dad, I couldn’t have done it without you.

Norm Abram. Even when I would sit Saturdays in my one-bedroom apartment on the beach, I would watch the New Yankee Workshop and imagine myself in the shop beside Norm, building those pieces.  I always wanted to visit the shop.  One day… perhaps…

Gail O’Rourke. You may not of heard about her, but if Gail had not called to invite me to a charity build-a-thon at a woodworking school back in 2005, there’s a good chance I would still be an anonymous woodworker toiling away in my garage.  From that initial contact, the doors began to open.  Since then, Gail has been a mentor, encouraging me to take step after step to get more involved with the woodworking field.  Thanks, Gail.

3 thoughts on “Finding those roots”