One of the best parts of my job as the county’s emergency preparedness spokesperson is that I get to speak at a lot of disaster preparation events. Since the Tampa Bay area is most vulnerable to hurricanes and other tropical weather events, I frequently share top billing with the local TV meteorologists. They are a fun group of folks who love to talk weather and can take a general ribbing when their forecasts don’t always pan out. 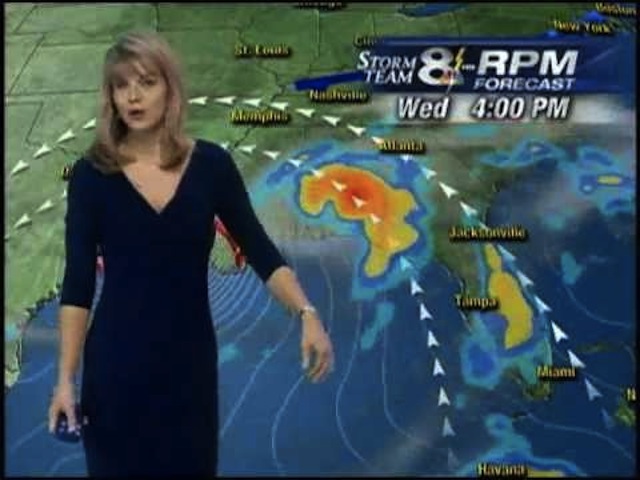 One TV Mets I have presented with is Leigh Spann, the morning forecaster for WFLA-TV, Channel 8 here in the Tampa Bay area.  She was out this past weekend banging the drum about hurricane awareness, when the folks at NOVA Tools  – just a few booths over – invited her in for a spin. Here’s Leigh’s account of the experience. (And, yes, I warned Leigh about the dangers of woodworking without safety glasses. She needs to watch Norm’s weekly admonishment.)

I arrived at the St. Pete Downtown Food and Wine Fest to hand out hurricane guides at the WFLA vender booth. As I walked to the booth, I passed a woodworking vender, and I didn’t actually think twice about it.

About 10 minutes later, the vender popped over to our table and asked if I wanted to try my hand at his craft. I couldn’t have been happier! 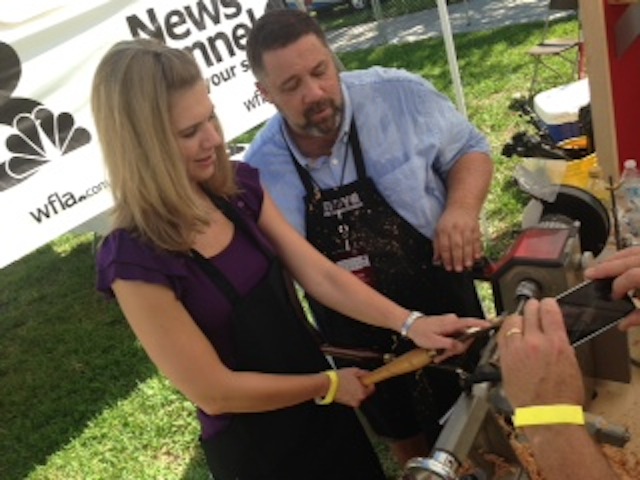 He had small blocks of wood that attendees of the Fest could transform into ink pens. He asked me what kind of wood I like, and I responded that I typically choose darker colored woods. He held up a dark walnut, but in his other hand was a lighter block. He said the lighter one is actually from a tree you can no longer cut down, but it can be brought up from the bottom of bodies of water. He said that this wood could be thousands of years old. (Sadly, I can’t remember the name of the wood now.) I quickly said “Well, I HAVE to choose the one with the better story!”

Then, we stood behind the machine, and he assembled the pieces to secure the block of light wood. He flipped the switch, and it started spinning. He handed me a tool that looked like a long knife with appropriately enough a wooden handle, but the “blade” was scooped on the sides and not sharp. He explained that as I lightly held the tool to the spinning piece of wood it would take the corners off and give the block a cylinder shape.’ 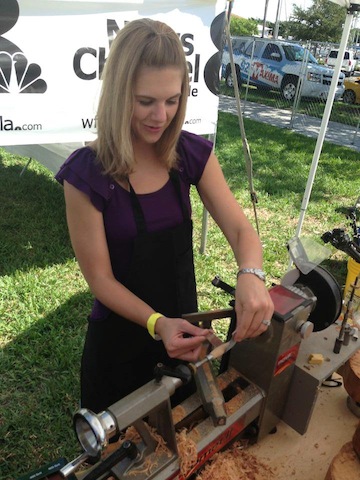 After a few false starts, I had a nice rounded piece of wood that looked somewhat pen-like. Next came the sandpaper. Then, the wax. He handed me a block of hard wax that I would slowly slide over the wood as it spun. The heat generated from the friction causes the wax to melt and helped shine up the wood. Finally, we grabbed some of the wood shavings from the table and slowly ran those over the wood. As the shavings heated up on the cylindrical-shaped wood, it really seemed to draw out the various colors in the natural wood grain. 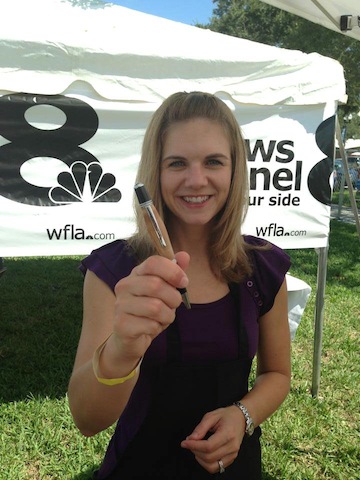 He connected the ink pen to the piece of wood I had crafted, and I had my own one-of-a-kind self-made writing utensil. Who knew I was so crafty?! I look forward to setting up a time to meet with him again to create a wooden bowl that can be auctioned off during the Empty Bowls event to benefit Feeding America Tampa Bay.

I dunno… it looks like someone may be asking for a new lathe this holiday season. Hey, Leigh, keep us up to date on what you make next!

2 thoughts on “She’s a new turner”