Today, I send a shout-out to Dan and Tim Walter, formerly of Eagle America Tools. 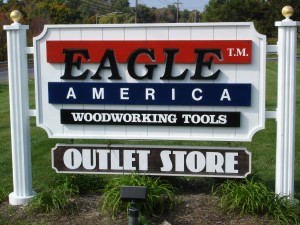 When I first started woodworking, I quickly discovered that I couldn’t just walk into the local home improvement center and pick up the tools, blades and bits I needed for woodworking.  While there is a Woodcraft store a bit of a drive from my house, I found that it was much more convenient to order the tools I needed and have them sent by mail. One of the first places I found was Eagle America, at the time run by Dan Walter and his son Tim.

After exchanging a few e-mails with Tim, the two Walters approached me about a proposition. “Tom, would you like us to advertise on your site?”  This was a real shift in my time as a blogger… someone actually wanted to be associated with Tom’s Workbench on my home page!  I agreed, and that partnership went very well for years.

Last year, Dan and Tim sold the company, and have since moved on to bigger and better things. That was when our business relationship ended. While initially sad, I ultimately feel great about this experience because it showed me that people were interested in supporting what I had to say, and the risk that Dan and Tim took with me helped open the doors with other advertisers.

Thanks again, Dan and Tim.