I have this really good friend. She lives right down the street from us.  Our kids play together. Both families get together for picnics, dinners over and movie nights. Her husband is a Washington Redskins fan, but this New York Giants fan can still allow him into his house.

She also happens to be Swedish. Well, she used to be, but she became an American citizen a few years ago. Anyway, she still has family and friends over in the homeland, and she recently visited her brother to celebrate his 50th birthday. It was a total surprise. 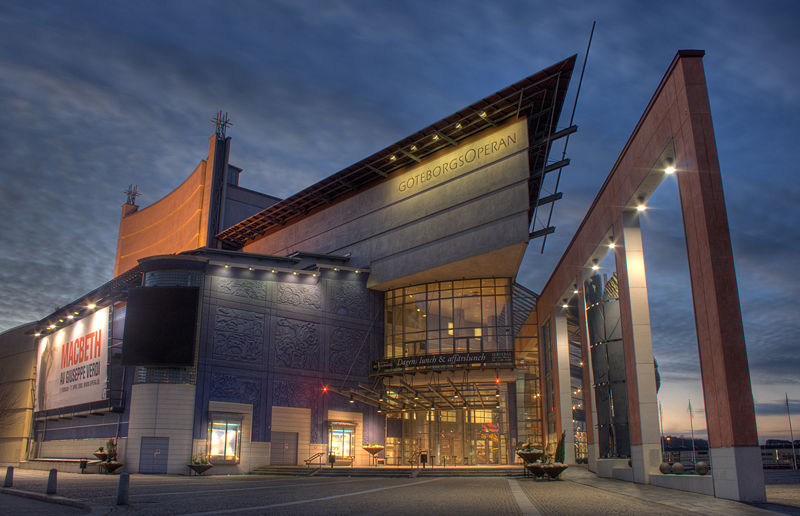 Before she made the return trip to Florida, her brother brought out a family heirloom. A piece of furniture she had always loved. It is a three-legged corner chair known as a Munkstol. What’s a Munkstol? Glad you asked. According to the Swedish Wikipedia and a bad translation from Google Translate:

A monk’s chair is a seating piece of furniture that was particularly popular during National Romanticism. Munk The chair is made of three straight, vertical poles, which constitutes both legs and holds up armrests. Between these there is a horizontal, triangle shaped seat with a tip pointing backwards. Munk chairs are often equipped with hand-woven, thin cushions of wool. They are quite uncomfortable to sit in. 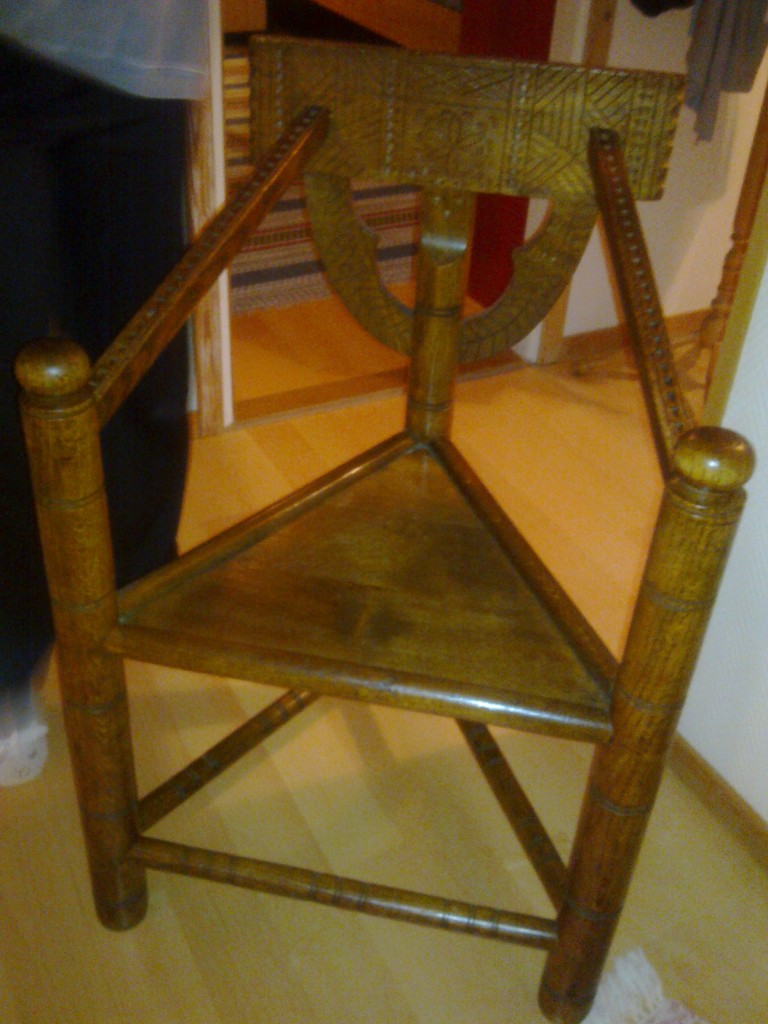 And, as you can see, it’s a pretty sweet looking corner chair. My neighbor told me they were very popular after World War II. The three posts are turned beautifully, the crest rail is very ornately carved. The seat is an elegantly raised panel, with its edges held in a groove in each of the three turned seat stretchers. Quite the interesting looking project.

The only problem?  Well, her brother – in a totally kind effort to make it easier to carry back – basically beat the piece apart with a hammer.  So, these are the pieces… 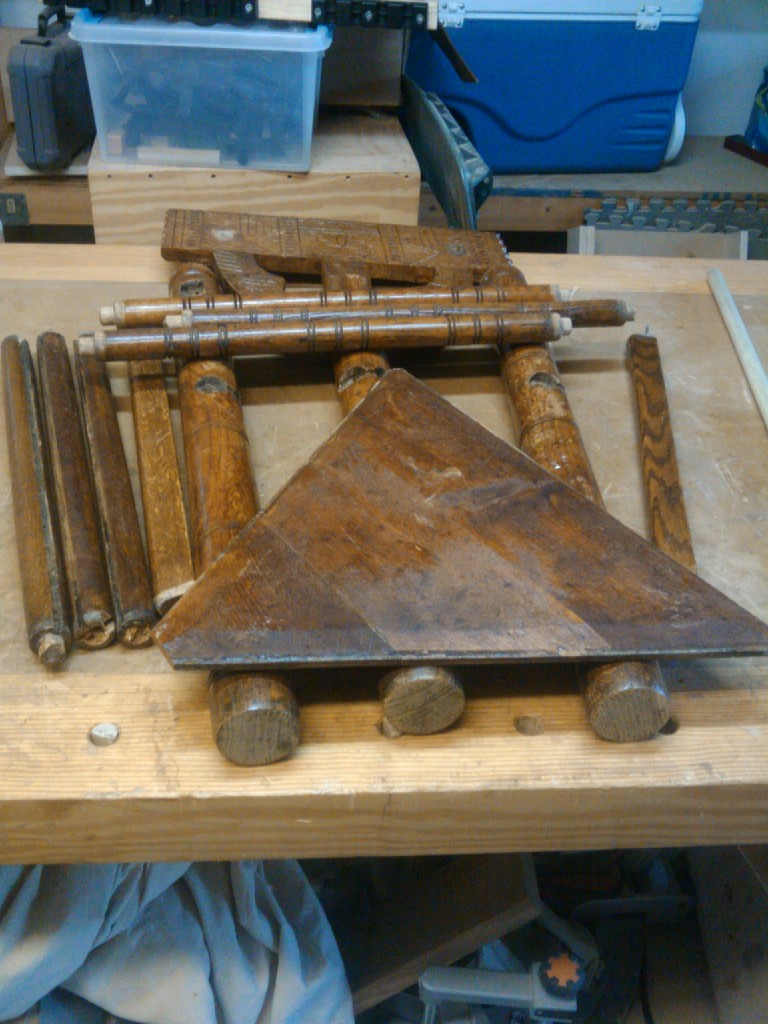 Ehhh. This wouldn’t normally be an issue, but part of the plan when things were being busted apart was that my neighbor’s good woodworking friend – you know, the guy who likes to woodwork in the neighborhood – would be more than happy to put things back together…

Gosh, it would have been easier had her brother – in his zeal to pack this baby up – not busted the piece up so roughly that he broke off the tenons on all of the turned seat spindles… 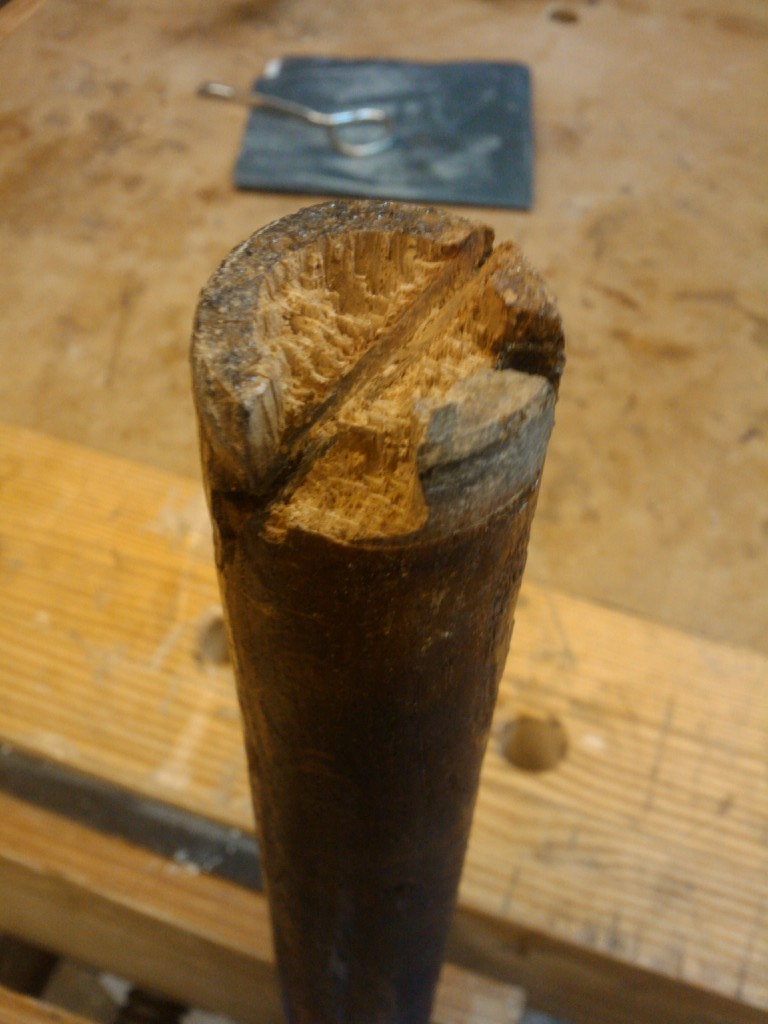 Fortunately, I was able to spend some time cleaning out the broken off tenons from the mortises (And pulling out the incredible number of cut nails that had been driven into the piece to keep the spindles from twisting), so they are ready to have new tenons prepared for them. And, I also discovered that a standard-issue 3/4″ hardwood dowel from the local home improvement center fits into the round mortises perfectly. 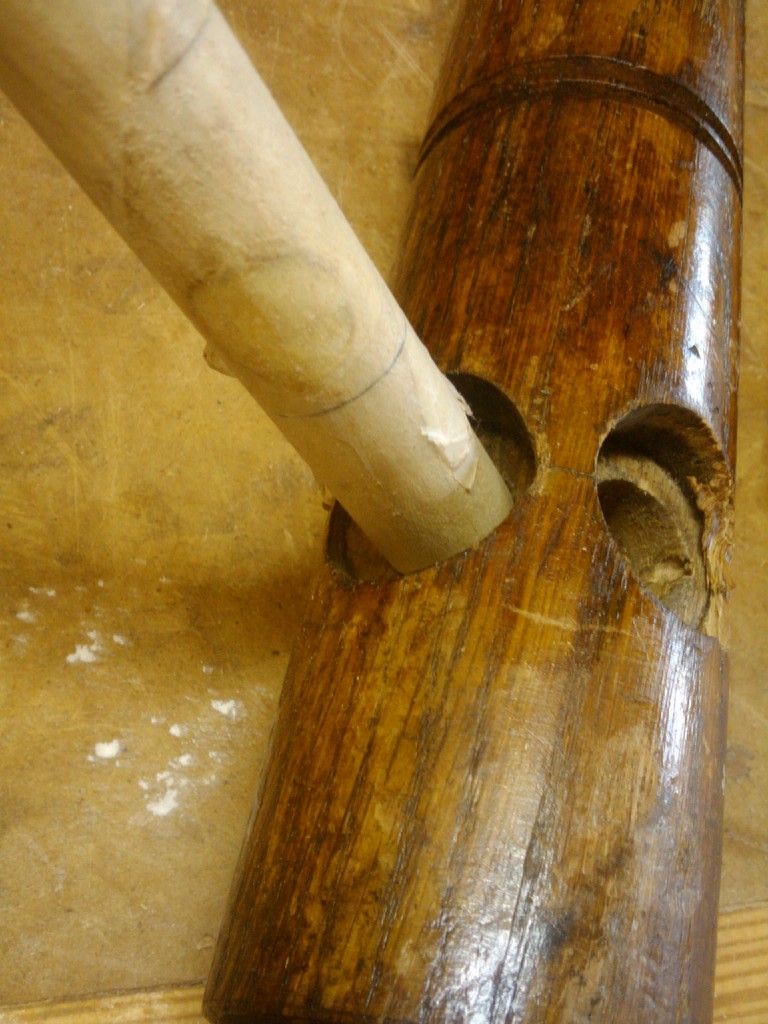 Now, I just need to figure out a way to bore a hole into the end grain of the  spindles, set the dowels into those spindles with some epoxy, and then epoxy them into the mortises without blowing out the sides of the spindles… This is going to be a real challenge.

The other one is to get the assembly put back together in the proper order. You can see from the finished piece that this is going to be one complicated build to get everything together….

Now, my neighbor’s husband is a professional sushi chef. So, I’m going to be plied with some prime Hawaiian tuna as a repayment for this job. So, with visions of some tasty Japanese treats dancing in my mind, I’m going to have to find the way to do this project soon… So I can enjoy  the sushi while admiring the completed, serviceable Monkstol.

10 thoughts on “The busted chair”