I am a few weeks late for a Halloween post, but today I celebrate the creation of – the Frankenplane… 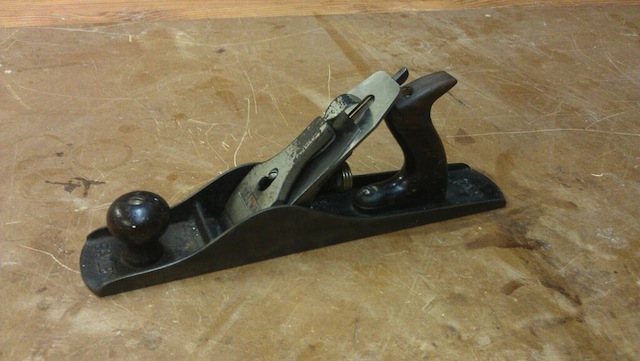 These planes are probably more common than you may believe. Basically, it is a Stanley No. 5, just with parts and pieces from planes of different eras. The body of this plane has been featured on the blog before, when I snapped the cap lever.  The cap lever came from a 1960’s era No. 4 smoother, and the iron is a replacement. The tote is a replacement as well.  Who cares if the parts are the same age, does the plane work?  I wanted to find out!

One of the things I have heard from both Roy Underhill and Chris Schwarz is that the Jack Plane – the No. 5 – is the plane that should be getting the most work. It can hog off wood cross grain quickly, and get just about any rough board into fighting shape in short order. But, to do that, the iron has to be ground to a camber, or have a curve at the business end.

Basically, this curve for a jack has to fall somewhere between the nearly straight across smoother iron (left) and the extreme curve of a scrub plane (right). This gives the iron the ability to scoop out wood quickly…

But, how to get that kind of curve, especially when I use a Tormek for sharpening?  Fortunately, by changing technique a little bit, I could achieve the graceful curve with little effort. The manual addressed the ability to get a cambered iron by emphasizing that some extra time and downward force exerted on one edge of the iron, easing that pressure as you slide the iron across the stone and then reapplying the pressure on the other side.  It took a little getting used to, but the iron took shape very quickly 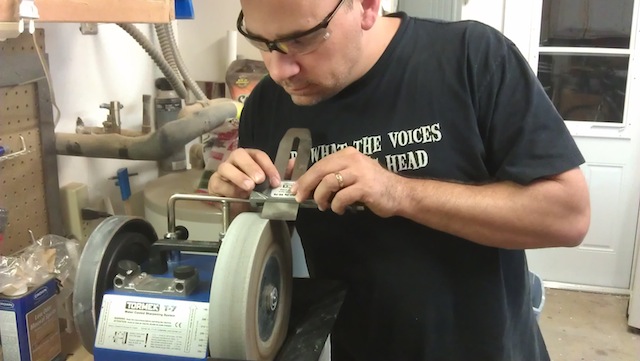 After the initial grinding, I was able to regrade the stone to the finer setting and really polish up the bevel. After that, I took the iron out of the jig and stropped off the burr on the leather wheel. Easy peasey lemon sqeezy. 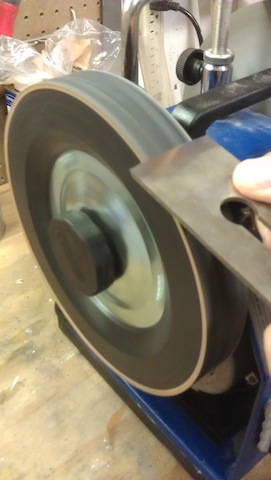 I assembled the Frankenplane and set up a board in the vise on my bench. As they say, the proof is in the planing, and the plane cut beautifully.  I tried planing across the grain – it worked. I planed diagonally – it worked. And just look at these lengthwise curls… this plane is ready to be thrown back into use. 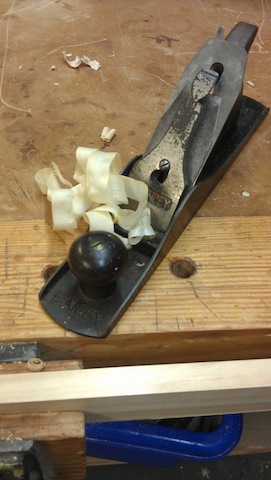 Now, it will have an honored place in the new tool chest, next to the smoother and jointer, ready to work on the next project.