Dust. Ugh. Sawdust is one of those things you have to deal with in a woodworking shop. One of the biggest contributors to the sawdust load is my contractor’s saw. I bought it about a decade ago, back in the days of open stand contractor’s saws with splitters. It’s been a good performer, but the dust that pours out of the bottom of the saw has always bothered me. 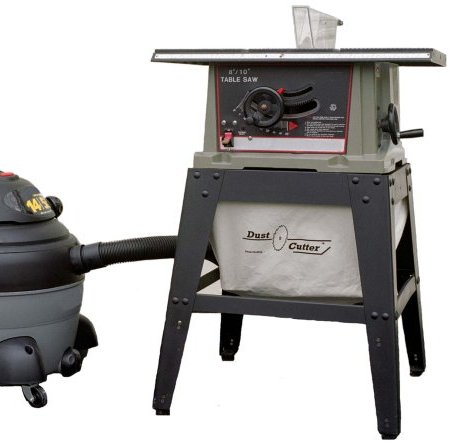 To help curb this problem, I have turned to several different types of solutions. A plastic plate that sat on top of the saw’s stand. It was a pain in the rear to get the dust collector hose to it. I went with the canvas bag type of setup, but that never held in place.

No, what I wanted was a hopper. With a dust fitting I could plug the hose into. That was sloped so the dust would migrate down to the outlet. But, how to make one?

I fished around on the Internet and saw lots of crazy complicated plans, but none of them did it for me. I broke out a sheet of graph paper and started figuring out an idea.  It wasn’t as tough as I thought it was going to be. 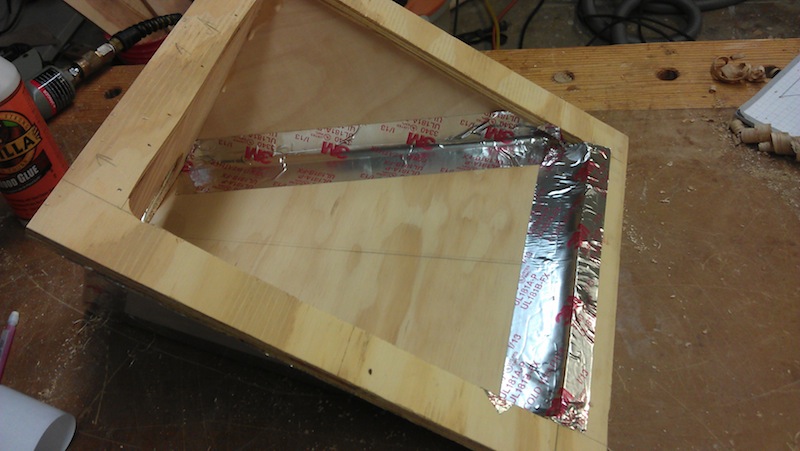 What I drew up was a five-part hopper. The first part was a plywood deck that had a hole cut into it. This serves as a frame for the rest of the hopper to fit onto. These pieces were complicated, but pretty simple to cut. The wall that holds the dust flange is attached to is 9 inches tall by 12 inches wide where it attaches to the top at a right angle.  This tapers down to 6 inches at the bottom. Before I cut everything out to size, I used a fly cutter on my drill press to cut a 4 inch diameter hole on this piece of the screw on dust flange. 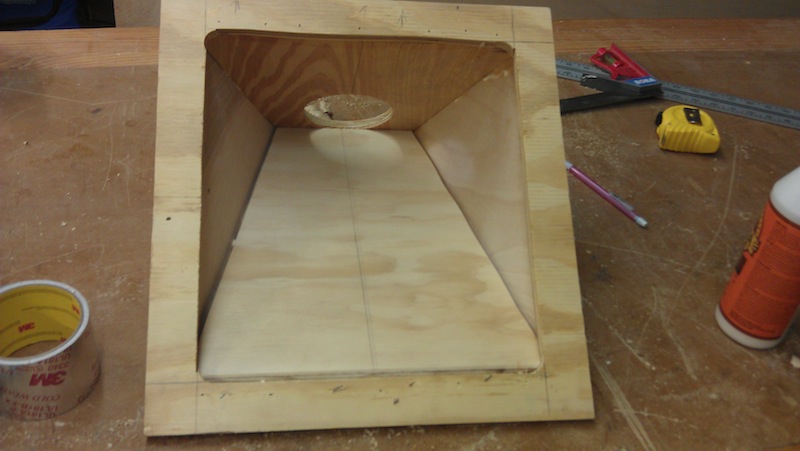 The sloped piece that connects the deck to the flange piece took some finagling, but by using a little bit of scrap wood, I was able to determine the angles that both ends needed to be beveled at. Once I had them all cut to size, I simply glued and bradded into place.

The sides were cut out of some scrap 1/4″ plywood, and were very easy to cut by simply holding them up to sides and tracing them. More glue and brads, and they were ready.

The fun came in when I started using foil duct tape to make everything airtight. That stuff is sweet. If my car’s bumper gets damaged, I’ll just use this metal on a roll to make the whole thing look good again. The beauty about this stuff is that it sticks like nobody’s business, and really seals the thing up well.

I was able to hold it against the bottom of the saw’s stand, and then screw it through four conveniently placed holes at the top of the legs. I used some shop made wooden washers to bridge the width of the hole so the screw heads don’t slip through the hole.

As you can see, I have the dust flange facing the right side of the saw as you face it. This keeps it out of the way of the rip fence and miter fence storage, and out of the way of the foot pedal for the lift. It also happens to be the side that the dust collector is stationed to in my shop, so I don’t have to step over the hose.

By the time that I got this done, I was too tired to try it out. But, judging from some tests I have done, it should serve me well for a while.

6 thoughts on “A dust gulper”