I bought my current table saw back in 2001 – April, I believe. When I got my hands on it, wow, it was just love at first flip of the switch. The thing surged to life – a whole lot more quietly than the universal drive benchtop table saw I used to have. That baby was a dream.

And, after a short while, I had heard that I could add a router table to one of the wings of the saw to open up some space in the shop. I was sold!  So, I cobbled together a little something – a sheet of melamine covered particle board, some bolts, a little bit of aluminum angle and I had myself a plan. So, I took out the right most extension wing and put my shop-made model in there. And it was good.

That’s when the one shortfall of this plan hit me. If I had to use both the router and the table saw – for something like shaping some molding on an oversized piece of wood and cutting the molding free – I had to move the rip fence between acts. Which meant I was never going to get my measurements exactly right. And, once the folks at Infinity Cutting Tools set me up with a new router table, well, this wing-mounted router table was unnecessary. 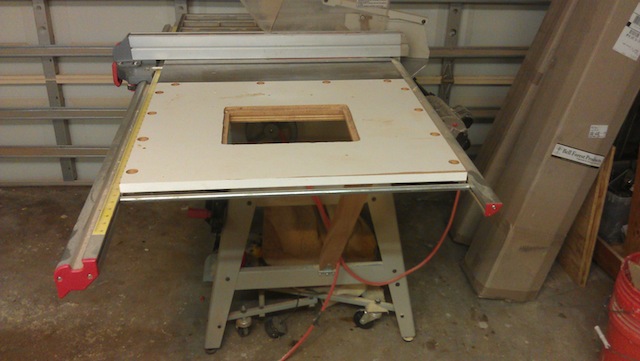 Getting to the table was going to be easy. The saw rolls nicely on the caster system, so I was able to spin it around to get lots of well-lit working space.  As you can see, it fits between the front and back rails, and has a diagonal brace to help support the weight of the router, table and work on it. The brace was going to have to go first. 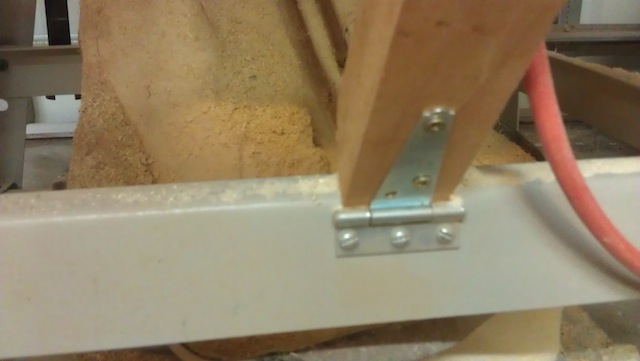 Since I had no earthly idea how I was going to get a diagonal brace into the space, I mounted it with a pair of T-hinges between the stand and a support block I had glued to the bottom side of the table with epoxy. Sure, it’s probably not the best idea, but it worked for nearly a decade.  That was just a simple matter of unbolting it from the stand and unscrewing from the bottom of the support block. 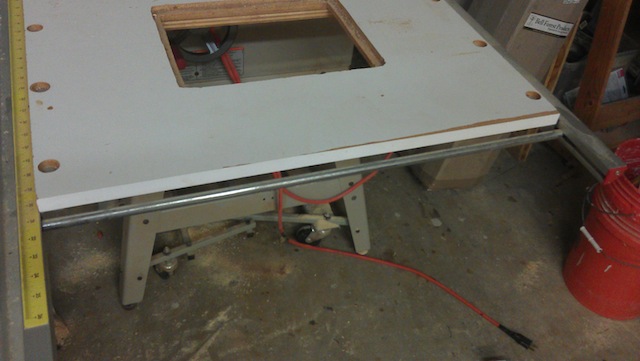 From there, I had to remove a round steel spreader bar that adds support to the rails. This was easy to do with an allen wrench. I was very careful to not lose the clips that held the bar in the tracks of the front and back fences.  Then, it was a simple job to unbolt the carriage bolts that held the table to the rails and the table to the saw, and slide the whole assembly off the rails. It took a little jiggling, but it worked.

While I was in there, I took the opportunity to replace a broken wire tie that allowed the power and motor cables to hang loose in the back of the saw. A wire zip tie was all that was required.  I also gave the retaining screws on the two hand wheels a quick turn to tighten them while I was there. I then installed the bolts into the wing and slid the assembly into the rails until it was snug to the saw’s body. 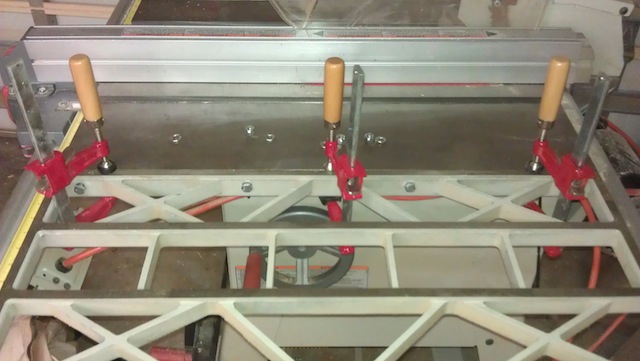 The instructions in the manual said to use a set of clamps to hold the wing flush to the saw table, which I did. I put the lock nuts on the back of the bolts and tightened everything into place. This was much easier than I had imagined. I slid the steel spreader bar into place and put the end caps back on the front and back rail. There, good as new… 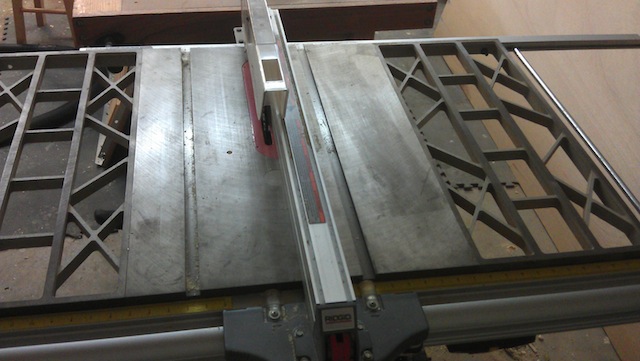 While I was down there, I noticed that the velcro strip for the  canvas dust collector bag I had put on the saw failed to hold in the dusty environment. I am thinking about finding a new way to hold that bag onto the saw to help contain the dust it generates. But, that’s another post for an other day…

5 thoughts on “Back where we started”