Over the past few years, this blog has  led me to some interesting places in the woodworking world. One of the most interesting is the hand tool world embraced by folks such as Shannon Rogers, Kari Hultman and Mike Siemsen. Hand planes. Chisels. And, most impressive of them all… hand saws.

Most of my collection are new models that I have purchases. A dozuki. A Veritas dovetail saw. A gent’s saw. Some nice stuff.

But, my favorite is my old Disston 5 TPI ripsaw.  I bought it online, stunned by how much steel was left on the saw.  As you can see, the handle is still in very good shape. The listing said that the saw dates back to the 1920s. The blade has some rust on it, and the distinctive etching has all but disappeared.

The best part of the saw is the amount of steel on it. The width of the blade is impressive given the age of the saw. As the saw gets sharpened, steel is filed off from the toothed end, narrowing the blade. Given enough sharpenings, the width of the blade gets so narrow that the saw eventually becomes unusable. Unless, of course, you want to cut the plate up into scraper sized blanks.

At last night’s St. Petersburg Woodcrafter’s Guild, I brought the saw in to have it looked at. Turns out that luthier extrodinaire Andy Gibson sharpens saws in his shop. He give the tool a once over, and was very impressed with its quality. He pointed out that when the saw was sharpened in the past, the teeth were never properly dressed, so it was something that was going to have to be fixed before it can be sharpened. 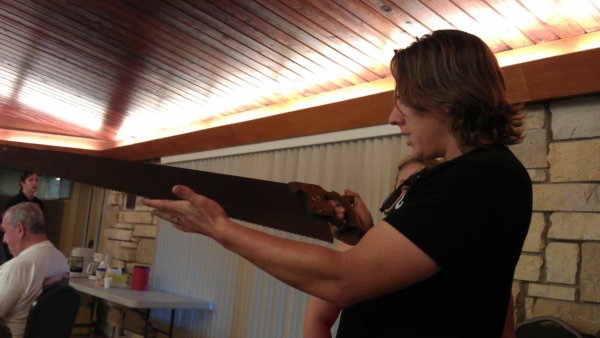 He also pointed out a subtle design in the saw. The front teeth of this rip saw were set closer together. He said that was in order to get the saw started into the kerf, with the larger teeth set toward the rear for heavier cuts.

Andy was going to take the saw back to his shop to do the sharpening, but then he had an idea. Why not come to my shop where we could do the sharpening together?  Hey, now that’s a good idea. We’ll have to set up a time to see when we can do that.  Heck, while we are at it, he’s also offered to help me build a new cherry handle for this old baby.

7 thoughts on “Sharpen that saw”