Last weekend, I was able to get those mangers finally done… and that was a good thing, because last night was the big holiday party for the St. Petersburg Woodcrafters Guild. Again, the mangers were part of the nativity sets that we were putting on some of the tables as centerpieces and door prizes for our guests.  And, boy, did they look great! 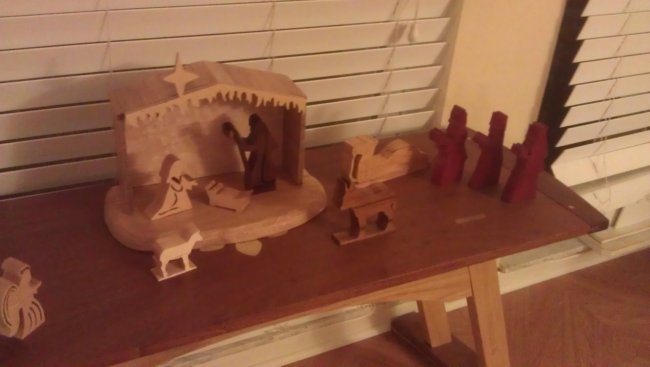 Again, the plans came from Steve Good, and since I didn’t have a scroll saw, I was put in charge of building the mangers and the bases. After everything was glued together, I sanded the mangers down to 150 grit paper, brushed them off and sprayed three coats of dewaxed shellac. You didn’t know I has a sprayer, did you?  Well, that’s grist for another post. After spraying and drying, I sanded them down with some 320 grit and hit them with a little paste wax.

The figures and the icicles were cut by fellow guild members Ted Bateman and Bill Murhpy, who are both talented scroll saw woodworkers.  And, boy howdy, did the both do a great job!  I’m not sure of the finish they used, but they looked great. Bill used a grab-bag of wood scraps (I’m not sure of the species) and Ted did the roof decorations out of 1/4″ Baltic birch plywood. 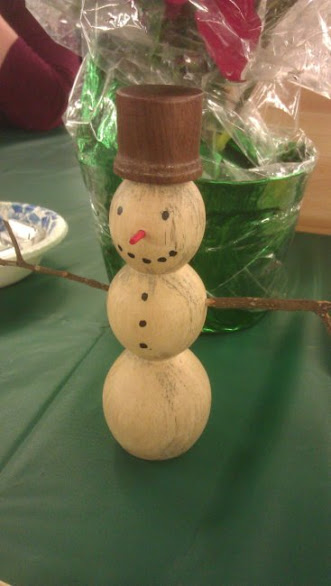 When Rhonda and I got to the party, we quickly grabbed our seat. I was staring straight at a gorgeous little snowmen one of the group’s turners had made. It was fun to see such a well made piece joining the party.

After we ate, we got down to some quick guild business. It was at that point… well… OK, I have to admit it now… a new slate of board members was officially sworn in for 2013.  And, yes, yours truly was sworn in as Vice President for the guild. Incoming President Dale Neff gave me a quick wink when we got the news. It was grand! 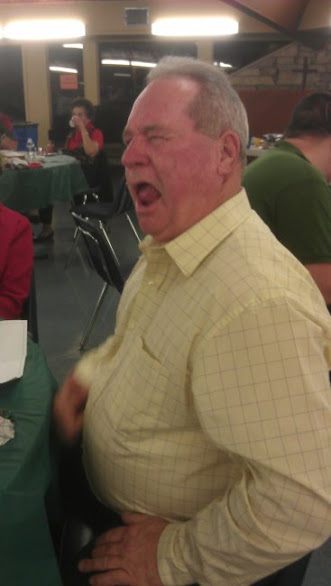 As Rhonda and I drove home, we were happy with the outcome of the night. We had a chance to pal around with some local woodworkers, I was able to get two of the mangers to our visitors (we held one, and Ted and Bill got the other two) who were thrilled to have them, and we are just that much closer to Christmas, my annual break from work and some quality shop time for some upcoming projects.

3 thoughts on “Stuff I’ve built (with some help!): The Nativity Sets”