If there’s one thing I am known for, it’s my inability to sing well. I mean, I couldn’t carry a tune if you put it in a bucket for me. Not sure why I sing at karaoke events, though…

The other thing I am known for is my consistent posting schedule. So, what gives?  No Sunday post?  A Monday post that is coming out in the afternoon? And, with a bunch of anxious folks looking to get to the thousandth post entry? 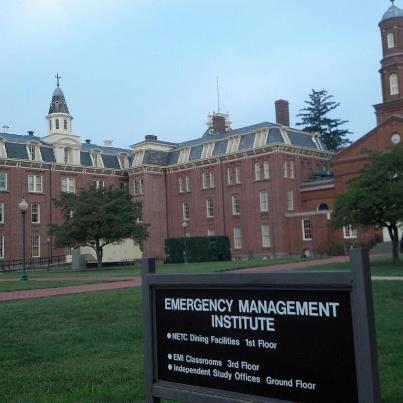 Well, this past week has been exceptionally interesting. You see, I was invited up to the National Emergency Management Institute in Emmitsburg, Maryland to instruct a Master Public Information Officer class. This was the pilot class, the first time it was ever taught, and it was a real honor to be selected as one of five instructors from around the country. 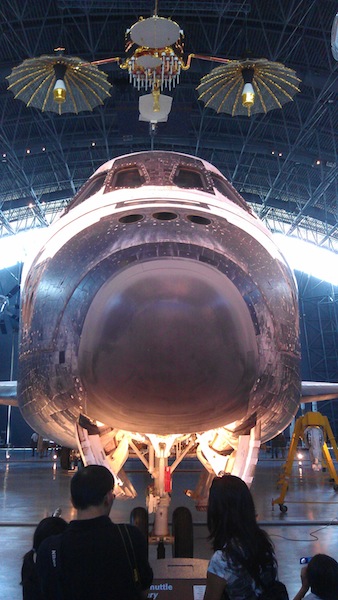 But, first, after I landed and got my rental car, I had to swing by and pay a visit to the Udvar-Hazy center of the National Air and Space museum. That’s where the Space Shuttle Discovery is now being exhibited, and wow, is that ever impressive. The craft is much larger than I expected it to be, and the sight just about moved me to tears. It is something I strongly recommend you see. 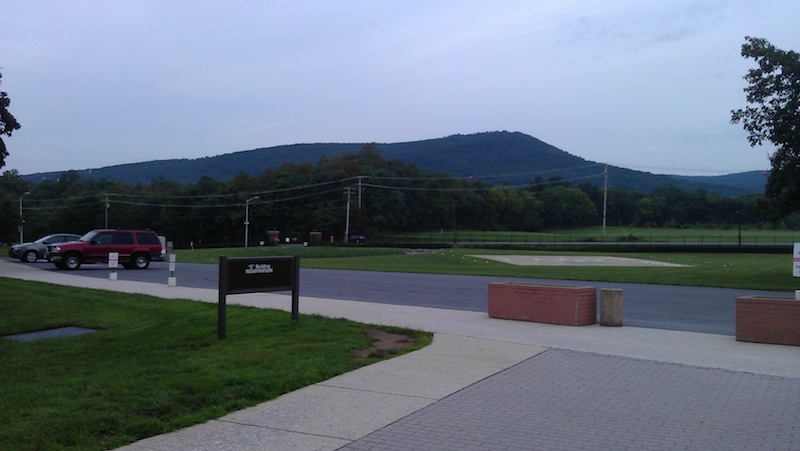 From there, it was off to the campus. The facility is a former Catholic college situated in the rolling hills of western Maryland, and the terrain is just gorgeous. It’s a far cry from the sandy, flat terrain we are used to here in Florida. In fact, the view from the front of my dorm room took in some exceptionally impressive views of a massive hill right nearby. 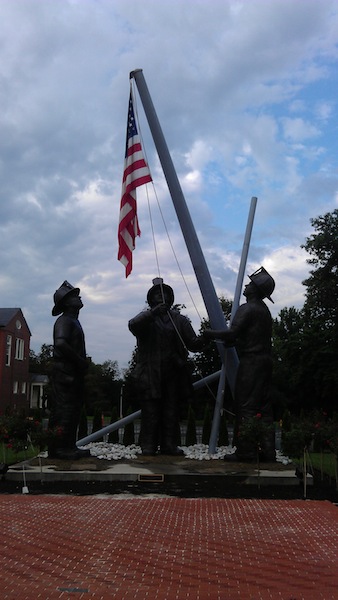 The campus is dedicated to both Emergency Management and Fire Safety, and there are a number of monuments around the campus that reflect this. The most striking sits in roughly the middle of campus, and is dedicated to the firefighters who lost their lives on September 11, 2001. A moment of quiet reflection under this monument can help put things into perspective…

The class itself was a real challenge. We five instructors were joined by 21 students who had a wealth of experience to bring to the table. People who had faced down tornadoes, hurricanes, earthquakes and many other disasters were there, and our job was to help develop advocates for public information. Hopefully, during the class, each of the students was able to take home enough inspiration to take their programs to the next level. 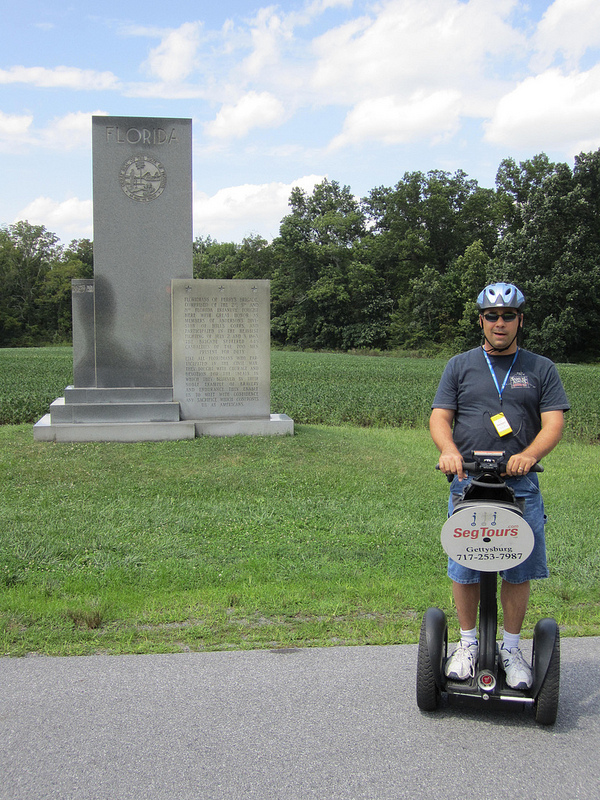 Since the campus is also about ten miles south of Gettysburg, no trip to the Emergency Management Institute is complete without a tour of the battlefield. My dad and stepmom met me while I was up there, and we saw the battlefield in a unique way – on Segway personal transports. These two-wheeled devices sure made navigating the hilly ground easier. The tour even stopped to catch a picture of me standing in front of the State of Florida’s memorial along the Confederate battle line.

The most moving part of the battlefield is known as the high water mark of the Confederacy or as the Angle. It was at this point in the line that General Pickett’s ill-fated charge actually reached the Union lines and nearly broke through, severing the Army of the Potomac and carrying the battle. Only a fierce counter-attack conducted by some Pennsylvania regiments pushed the Confederate onslaught back, saving the day for the men in blue. Just standing at the site is a moving experience… something I recommend highly. 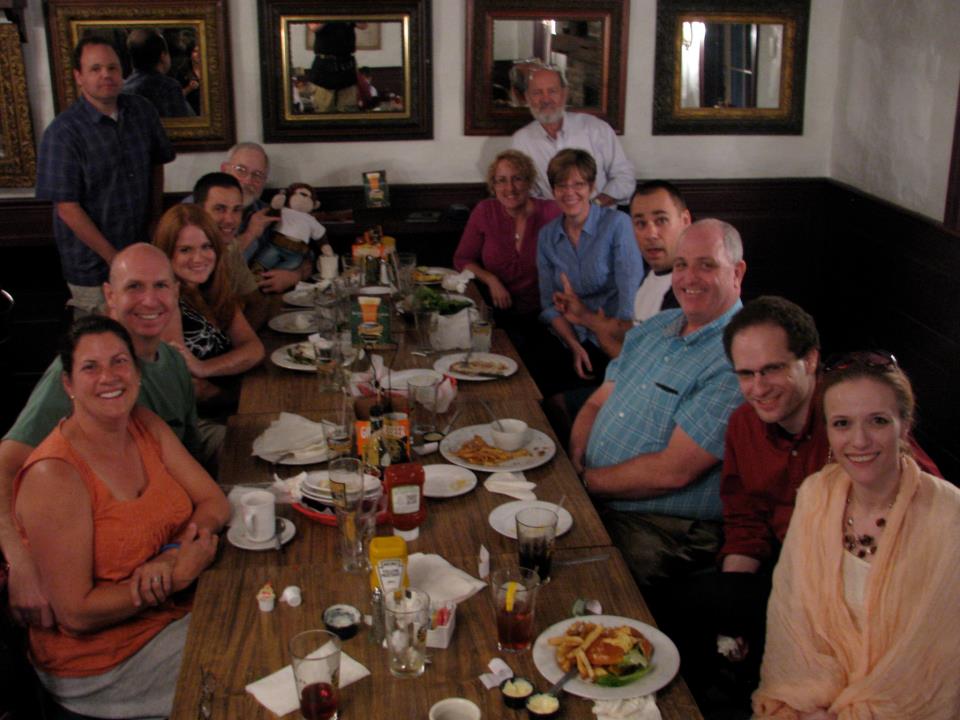 Right now, you might be wondering why I am sharing all of my trip pictures with you, and wondering what this has to do with woodworking. Well, there was another event that took place on Thursday night. Kari Hultman of the Village Carpenter’s website lives just up the street from Emmitsburg, and had asked if there was any chance we could get a group of area woodworkers together for some food, fun and tall tales. Our site of choice – the Appalachian Brewing Company restaurant in Gettysburg.  The food was great (If you get a chance, e-mail Kari about her salad…) but the conversation was even better. It’s always great to put names with faces, and I really would like to thank everyone who came out that night. Betsy Pearce Hochstein, Scott Hayes, Mark Hochstein, Adam Weigand, Daniel Bodan, Nancy Sheets, Alan Garner, Tom Iovino, Neal Becker, Andrew Vincent Cortese and Daria Cortése. Oh, and I should throw another thanks in there for Kari and – if you squint – you can see that Iggy got into his private jet and paid us a visit!  Good monkey…

Now, I’m back at the house. Refreshed. I have to knock out some grouting and other work on the shower project, but it will be back to the shop shortly!

5 thoughts on “Been kinda scarce”