Today, I send a shout-out to Matt Vanderlist. 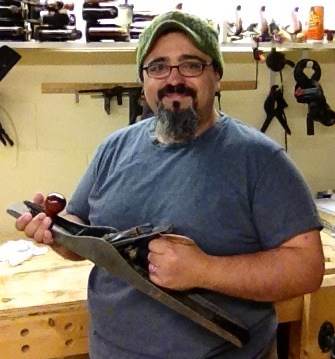 Shortly after getting involved with Marc, he strongly recommended that I check out Matt’s site. These two guys were just about to launch a new venture – Wood Talk Online – and he wanted me to be up to date on what Matt was doing.

I was amazed to see just how much of a pioneer that Matt was.  With his own motivation, he was the first woodworker to put up a woodworking podcast.  It wasn’t an easy process – critics told hi m that the idea would never work, and he wavered for about six months before that fateful day in January of 2006, when episode one made its debut.

Matt has always been an encouraging voice in my development as a blogger. He’s the kind of guy you can shoot an idea past, and he can offer some sound advice. With his loyal and devoted audience and years of expertise, he has been able to suggest things  help my site flourish.

When Matt launched The Spoken Wood Podcast – seeking audio readings from other names in the woodworking community – I was honored that he selected me to be one of his first authors.  Today, I am proud to have been a part of this initiative that has opened the doors to an incredible amount of portable woodworking content, and exposed my blog to new audiences I would have never been able to reach.