The weather was gorgeous this past weekend – even better than normal. I was shaking off the remnants of a cold and needed to get out of the house for a while to stretch my legs. What could we do? A trip to the beach?  Ehhh, we’ve done that before. How about a romp in the park? Fun, but we’d only be there for a little bit of time.

How about doing something we’ve never done as a family, and go to the Heritage Village Folk Festival? Now we’re talking! 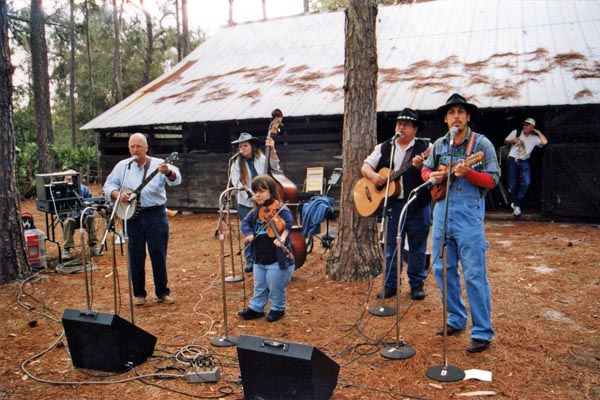 I’ve worked for the Pinellas County government for 18 years now, and Heritage Village is owned and operated by the government. They’ve held the Folk Festival for years, but for some reason, the idea of folk music didn’t do it for me.  They also have traditional crafting demonstrations, but there’s only so much work on the loom you can stand. And, when you’ve seen a few meticulously-restored Model A Fords, well, they start to blend together.  The kids really dig that they had kettle corn, so, that was a draw…

But, that was it. I had never gone to the event… Even though I live about a five minute bike ride away…

This year was different. I had been in touch with the folks at the St. Petersburg Woodcrafter’s Guild (more is coming on them… believe me!) about possibly participating in the event, and I heard they worked out a deal to be there to show the craft.  SCHWEET!

So, we walked around, taking in the beaming sunshine, fresh air and twanging sounds of folk music. We stopped in a few historical homes to take a peek, and when we got to the Harris School, the banner for the guild was hanging proudly. Ahhh, here we were! 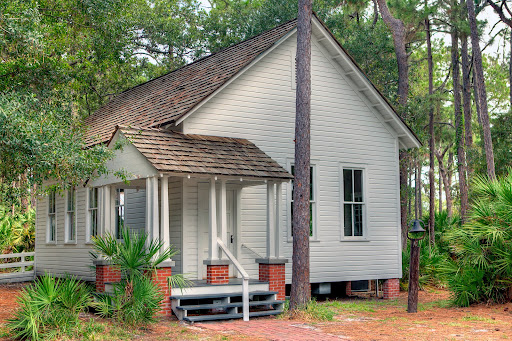 We went into the one-room schoolhouse, which normally has period desks lined up in rows. Instead, the desks were removed and the building was converted into one sweet hand tool shop for a day.

Members of the guild were there showing off several period tools – a spring pole lathe, a shaving horse, smoothing planes… the works.  Each of the stations had a few guild members helping visitors get a handle on what was going on in the shop.

My son Steven got a chance to handle a sweet smoothing plane. I think he’s a little short to get the maximum effect. 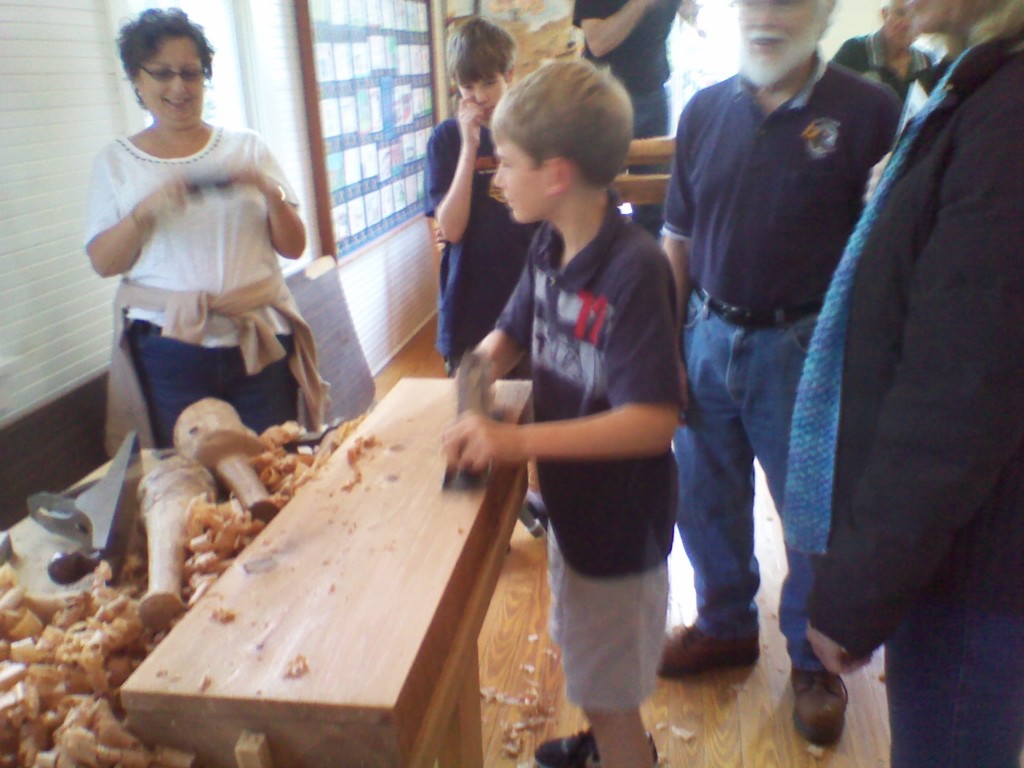 Dominic was the man behind the spring pole lathe, getting some good direction on how to use the turning tools. The boy is a natural! 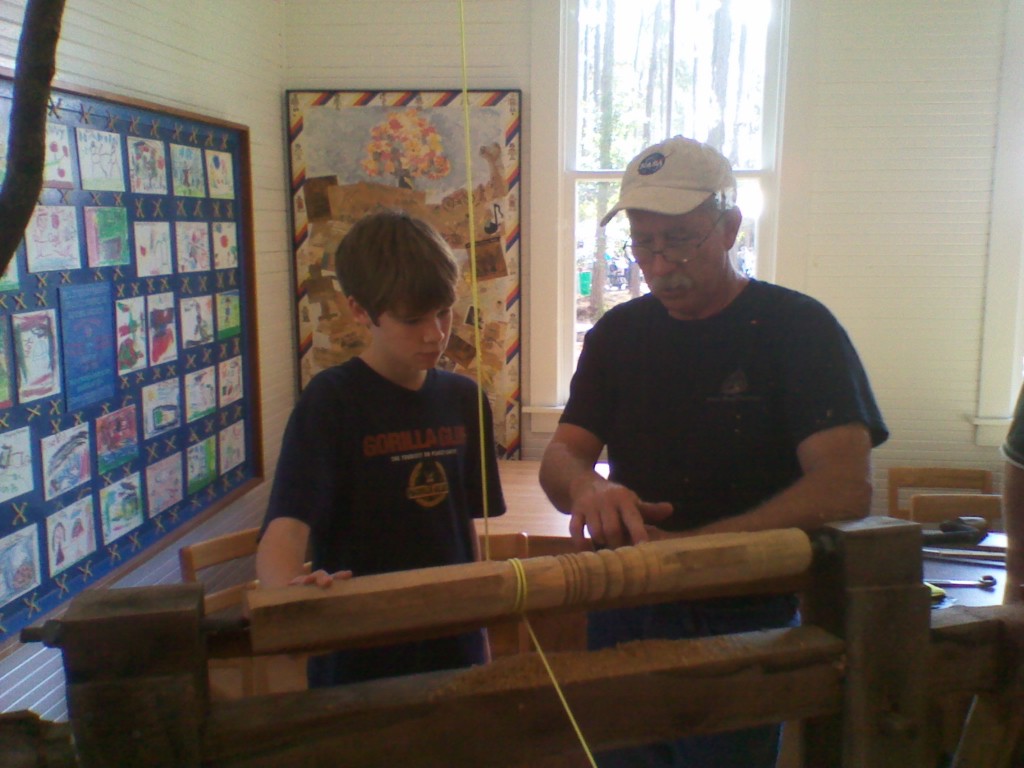 And, me? Well, giddayup! I was working the shaving horse… for the first time ever. That oak never stood a chance! 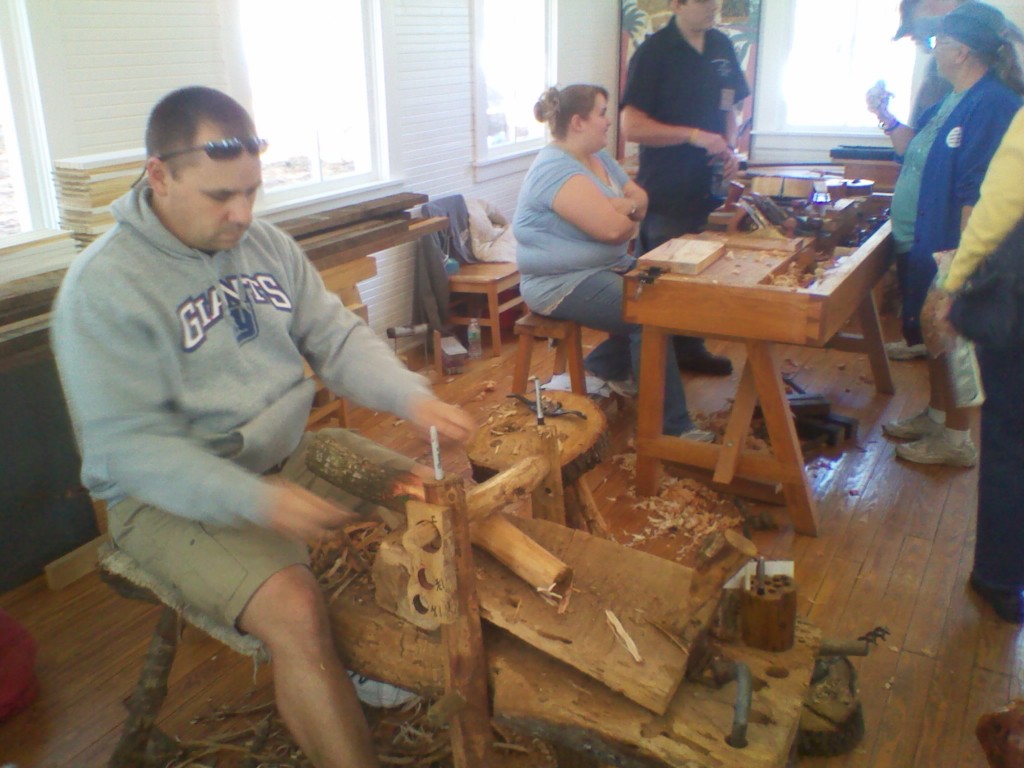 During the 20 minutes at the Harris School, I learned a few things:

This was the first time the St. Petersburg Woodcrafters’ Guild ever came to an event at Heritage Village. Judging from the pile of sawdust, shavings and other wood scraps on the floor, I’d say they had been very busy – and we all know, a busy shop is a popular shop!

Secondly, the folks at the guild are knowledgeable about what they are doing, and they can communicate that clearly to visitors… Perhaps we can see some new woodworkers after this weekend?

And, finally, trying new stuff in woodworking?  It totally kicks butt. That was a blast to get on the shaving horse, and I can see why people like that so much.  Heck, I may have to build my own…

After our trip to the Harris School, we walked around the grounds for a while, and yes, we bought the boys their kettle corn. As we were heading out, we passed by the Harris School again. Amazingly, there was a line of people waiting to get into the building.  As I walked past, I smiled.  Woodworking was definitely alive and well in Heritage Village that afternoon.

6 thoughts on “Try something new”