Planes are cool. So are chisels. But,they aren’t always the ideal tools for certain situations.

For instance, when you are trying to plane a curve to make it fair and smooth, bench and block planes are tough to maneuver around the turns.

And, when I try to smooth things out with my chisels, they are tough to control, wanting to follow the grain and slice deeply into the piece.

What I need is a tool that bridges the chasm between the two tools – the maneuverability of chisels with the smooth and refined cutting action of my planes.

That, my friends, is what a spokeshave does for you. These tiny tools have big potential in your shop and deserve their place at the workbench. 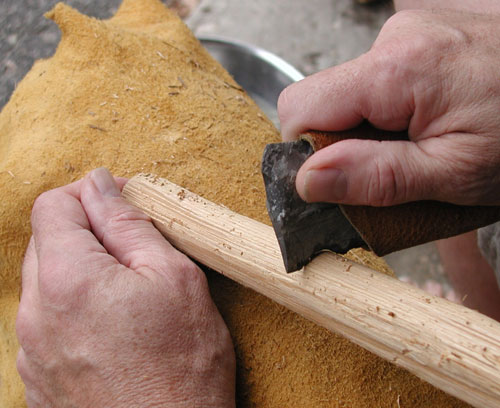 The first spokeshaves were used in prehistoric times. Closely resembling the knapped flint knives, the sharp rounded or lunate edge was kept to the center of the tool with the back edge rounded to ease pulling. Their purposed was simple – to shape arrow shafts so they would fly farther and straighter when launched from a bow. 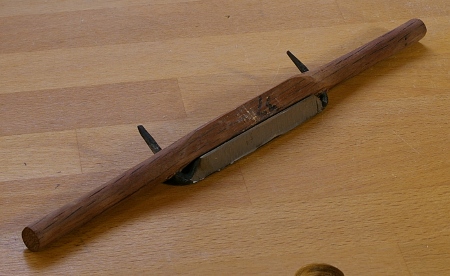 As technology improved, spokeshave blades were cast or forged from metal and were held in a wooden body. The blade was held in place by two tangs that were pushed through holes in the body. While this gives a good hold on the blade, it’s challenging to adjust. That’s why modern wooden body spokeshave irons have threaded tangs that go through the body but adjust with thumbscrews to hold the blade fast.

Metal bodied spokeshaves appeared later, and were popular because of their adjustment mechanisms and that they were easier to sharpen since they didn’t require the tangs in wooden bodied models. Of course, metal spokeshave blades are much smaller than plane irons and present their own challenges when being sharpened…  More on this later.

The one spokeshave I own is an old Stanley 151 with twin adjustment wheels, a blade that looks like a plane iron and an iron body.  I picked it up for about $10 on eBay, and it’s done me very well.  I replaced the iron with a Lee Valley spokeshave O1 model, which takes a keen edge and slices wood beautifully.

The woodworkers who used these more modern versions to shape the wooden spokes on wheels as well as gracefully curved furniture parts – think cabriole legs. Since the spokeshave itself is kind of small,  it doesn’t do too well handling roughing work. For the heavy lifting, tools such as the band saw, bow saw and drawknife do an admirable job. Once I get the shape roughed out for what I’m working on, I often turn to the spokeshave to refine the shape and get the surface ready for finishing. Yes, unlike progressing through the grits on a spindle sander, wood that has been shaped by a spokeshave looks like it has been surfaced by a plane – it’s ready to go.

I have noticed that just as with a plane, grain direction is an important consideration. When working a curve, the grain changes direction relative to the blade after you hit the peak of a convex curve or the bottom of a concave curve. You go from slicing smoothly along to chattering and tear out. Blech. The rule of thumb I have found is that you spokeshave downhill on convex curves: 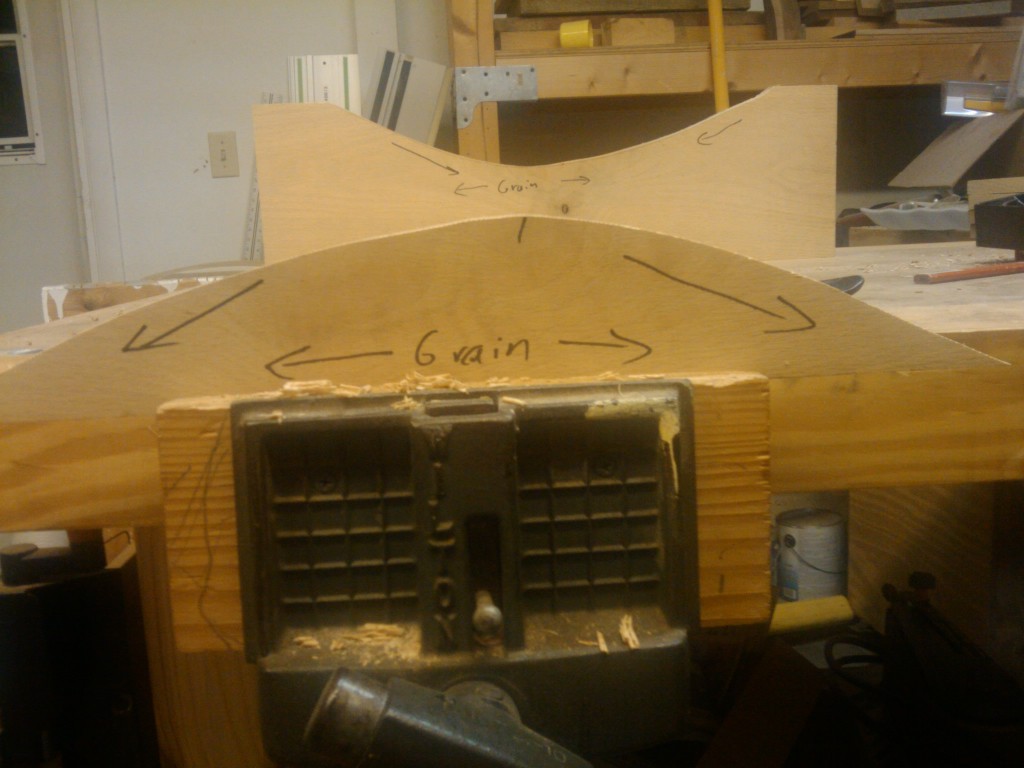 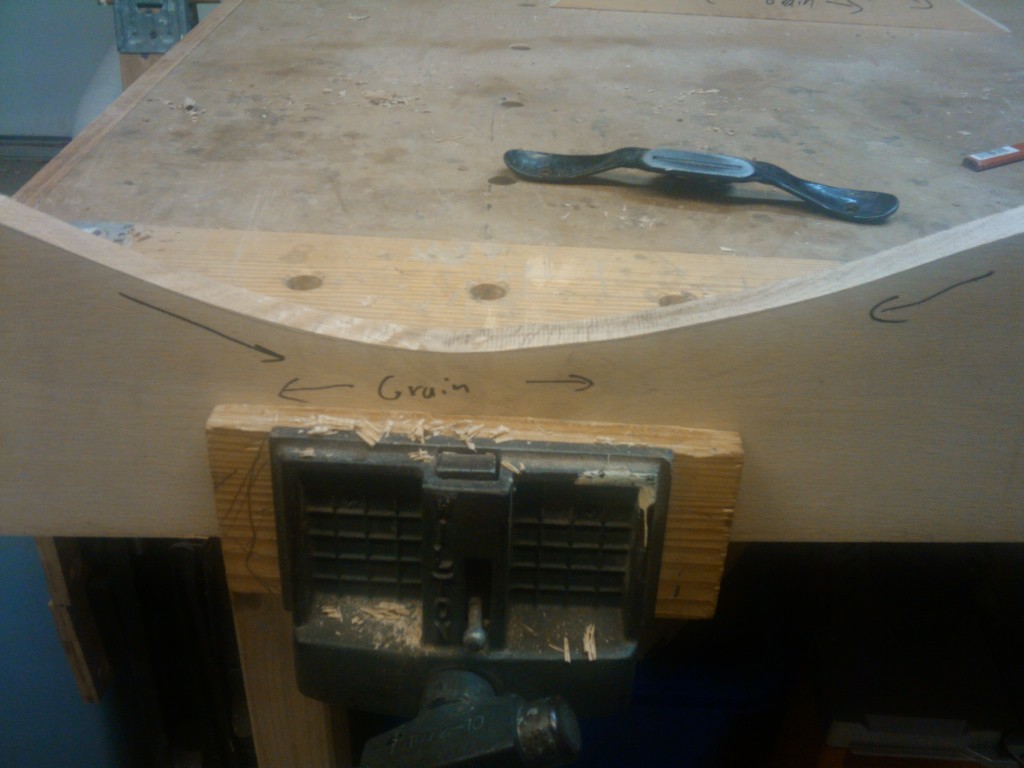 With just a little practice you’ll quickly go from planing curves fair to using it to shape three dimensional pieces with compound curves… it’s an  excellent sculpting tool. Of course, I also hear there are special rounded sole spokeshaves to get into tighter concave shapes, low-angle spokeshaves that do a better job on different kinds of woods… oh, the wish list grows longer with each passing day…

Now, if the spokeshave’s going to do its magic, it has to have a sharp iron. This is where I hear a lot of folks wonder how to make that happen. The iron is just so short, it doesn’t fit into a jig you might use for chisels or plane irons… hmmm… 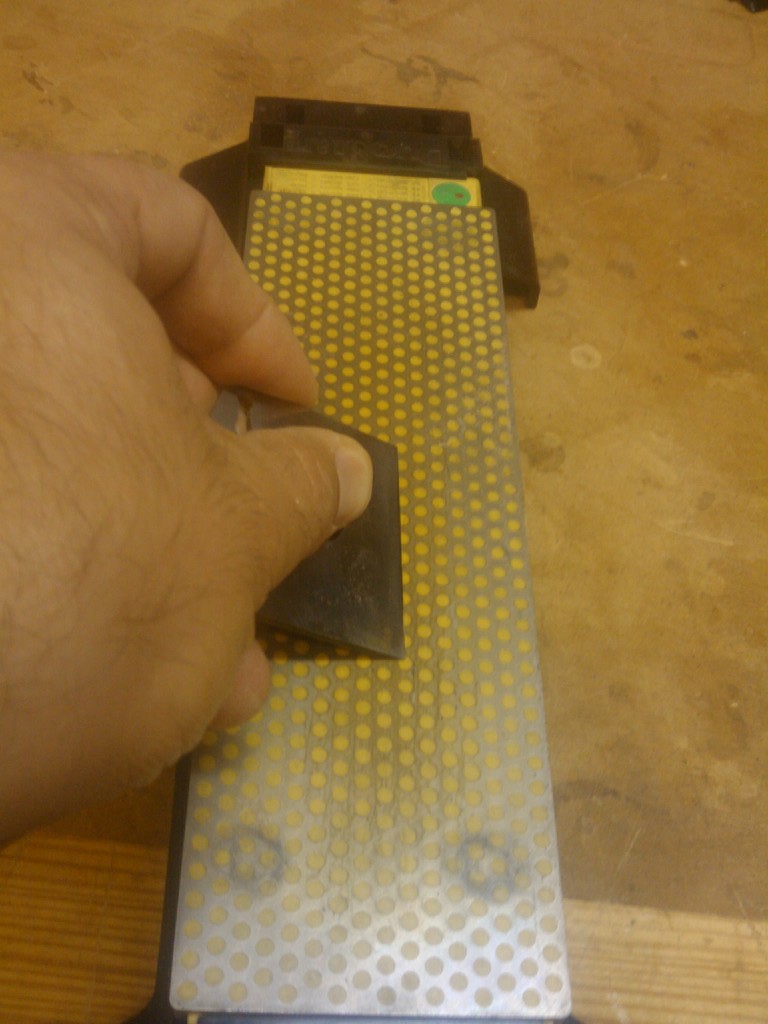 What I’ve found is that by holding the iron in my hand on its bevel and pushing it parallel with the length of your stone, you can keep a consistent bevel angle and consistent pressure against the stone instead of pushing the bevel in a more traditional perpendicular motion. Is it a perfect solution?  I’m sure there are probably jigs out there that tackle this issue elegantly, but I’m becoming more and more comfortable with this method.

While the spokeshave doesn’t come out for every project, the times I have used it have been a blast. I’m going to have to work more curves into my projects… and look at the offerings in catalogs to see if I can’t add some more versatility to my collection!

8 thoughts on “Tools I use: My spokeshave”