The one thing I enjoy most about Tom’s Workbench readers is your concern for my well-being and the well-being of my shop.

For instance, when I cut my finger while trimming bushes this past May, lots of folks e-mailed me to see how I was doing and to wish me a speedy recovery. I even got one e-mail where the poster made a mistake and referred to me as Einstein… I was flattered to be held in the same company as the genius himself, but it certainly wasn’t necessary.

So, it comes as no surprise that when I posted the picture of my poor table saw top after this weekend’s Halloween festivities there were plenty of people who were concerned about what they saw. I mean, with those rust rings from cold drinks and some mysterious sticky substance that appeared gray on the saw top, who could blame them? 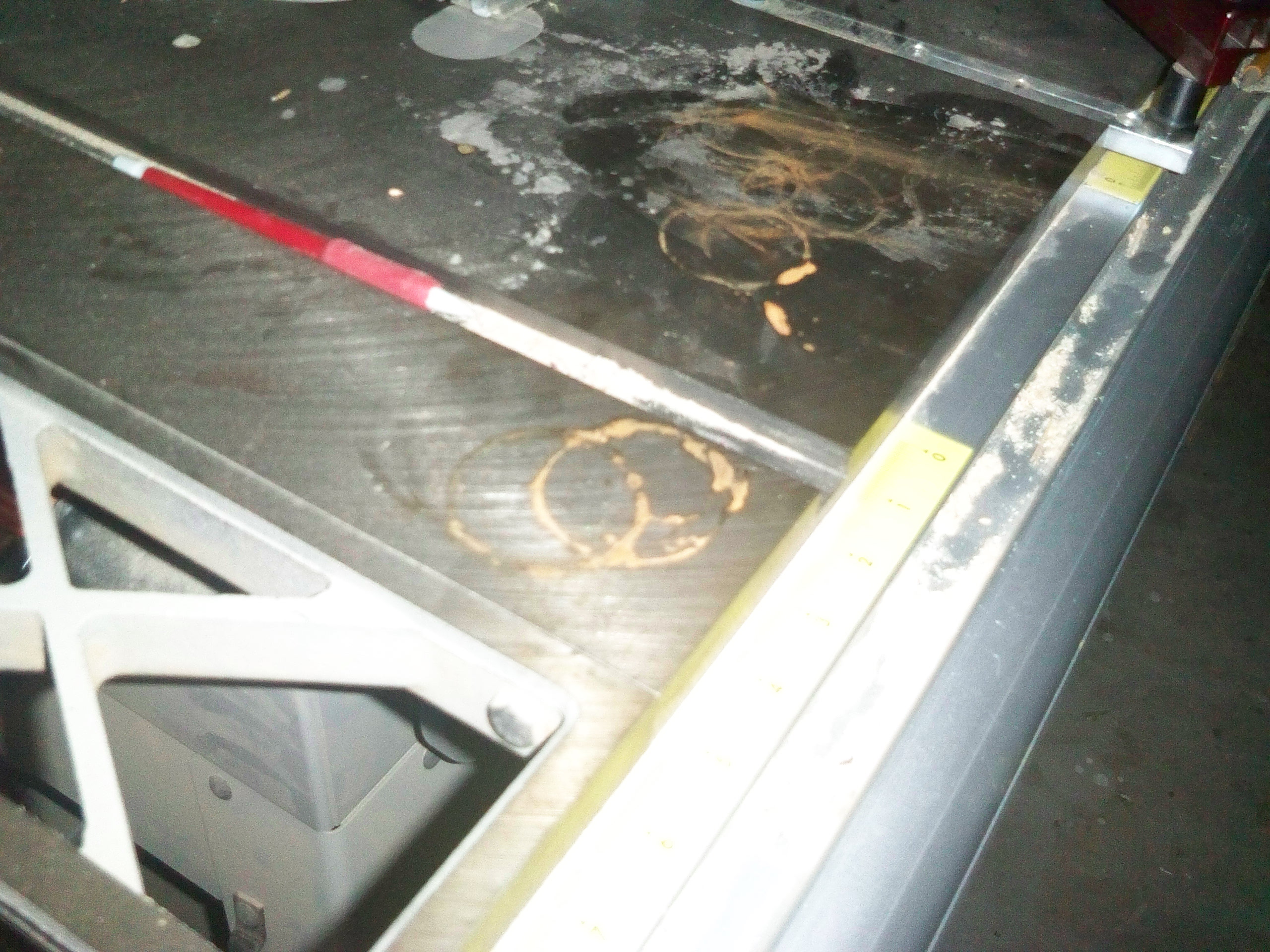 One person wrote that he was worried about the lack of respect I was showing for the cast iron top.  Another was so concerned, that he urged me to give up woodworking to prevent the possibility of inflicting more damage to the poor saw.

Fortunately, cast iron is pretty tough stuff, capable of taking some abuse before giving up the ghost.  And, recognizing the need to get myself right with the iron, I set out on my plan to restore the top to its shiny dignity.

What I needed was already in my shop… 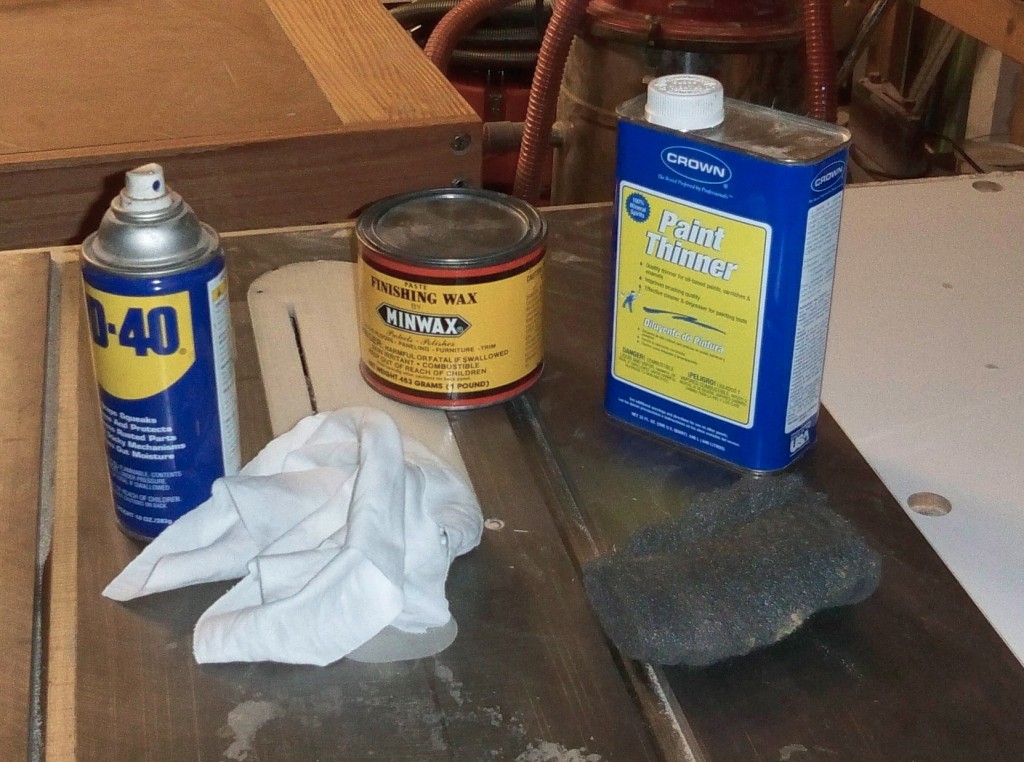 From left to right, there’s a can of the most popular spray lubricant in the known universe, a scrap of t-shirt (I actually used two…), a can of paste wax, some paint thinner and a steel wool pad.

Oh, and the most important ingredient of all… ELBOW GREASE!  Ask for it by name…

First, I started by removing the splitter, guard and lowering the saw blade below the table.  And, I made sure the saw was unplugged.. Very important step. Then, I dampened the piece of cloth with some paint thinner and started wiping the saw top.  Within – oh – seconds of starting, the red rust from the rings and the mysterious goop was removed from the saw top, deposited firmly on the surface of the cloth.  This removed not only the badness from the party, but the old paste wax from the last time I did the saw. 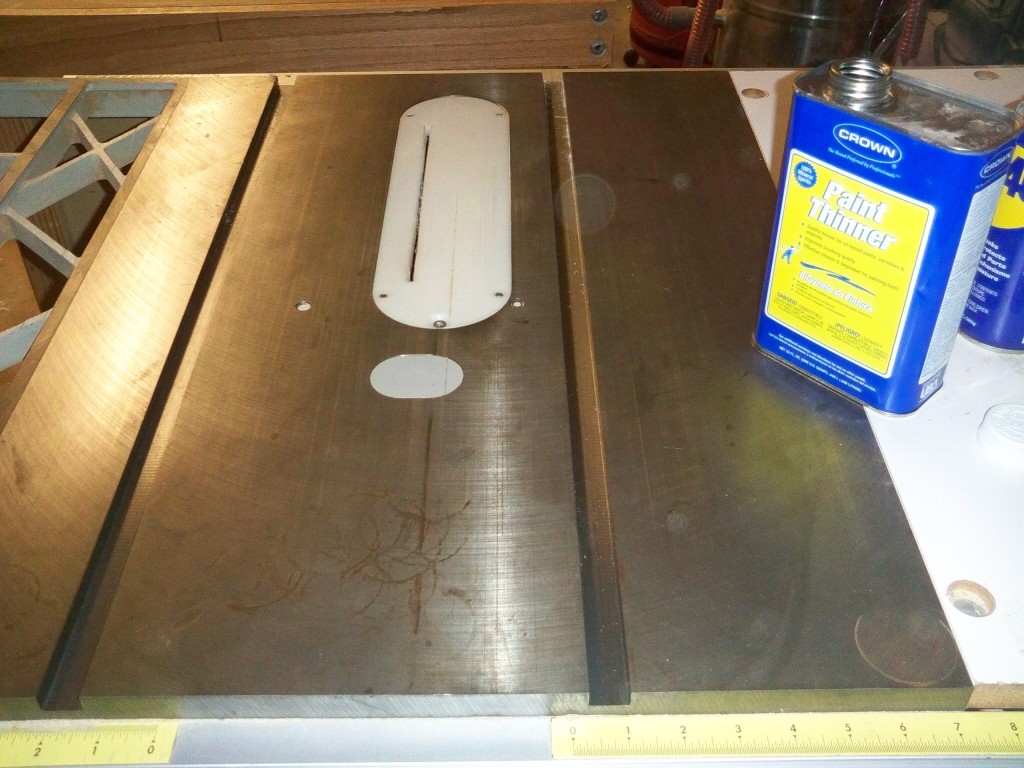 I was happy with the results, but the rust stains were still semi-etched into the top… bummer.  Well, there’s only ONE solution for that.. a quick spritz of WD-40 and the steel wool.  Rub, rub, rub… soon, I had built a little slurry on top of the saw (with just a little help from some 400 grit wet/dry sandpaper). A wipe with the t-shirt and bango…  the rings were gone. 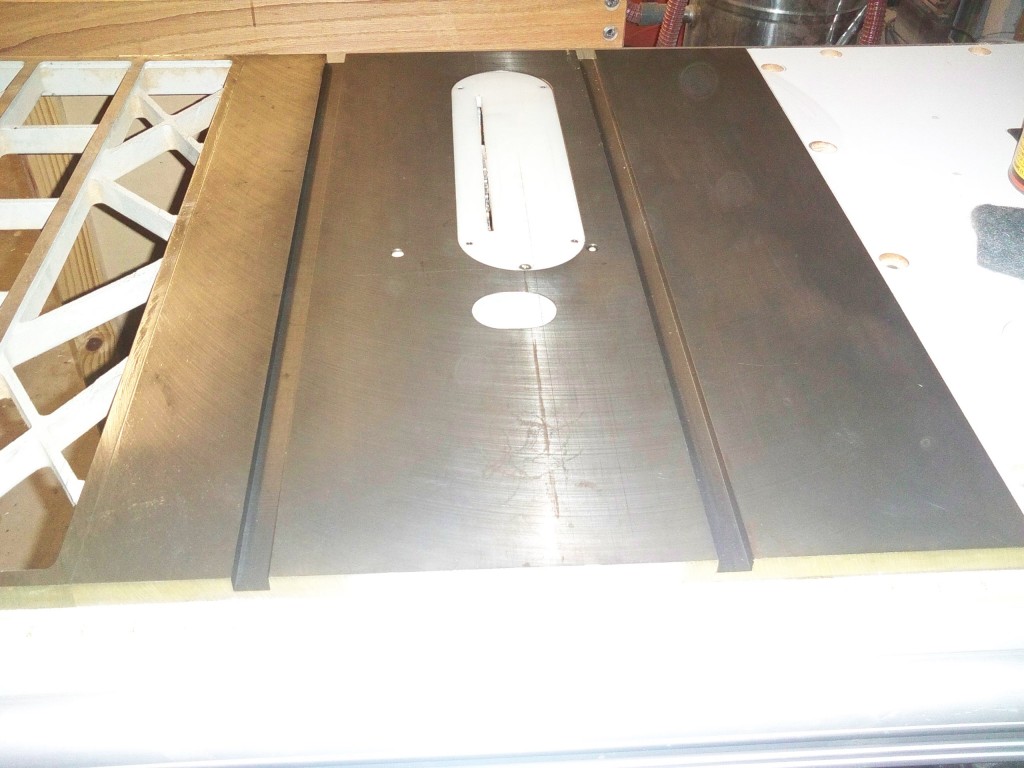 Well, now that the top was looking good, there was only one thing left to do. That was to use some silicon-free furniture paste wax.  I grabbed a little glob out of the can, buffed it into the top and then buffed it off. 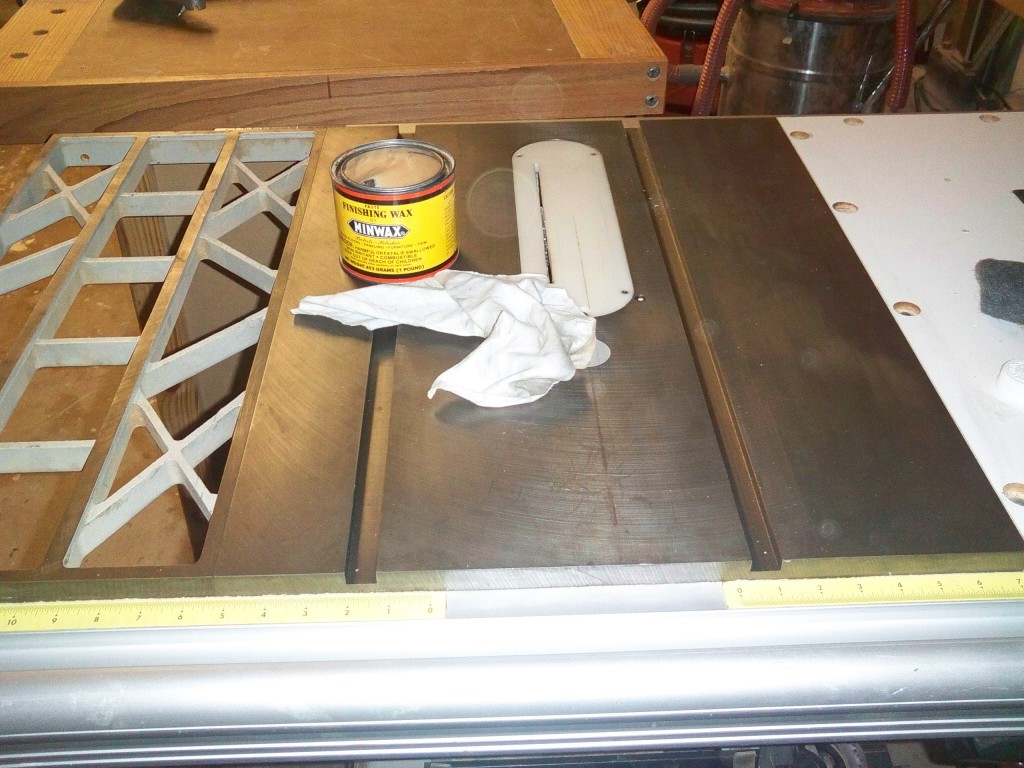 A grand total of six minutes from rust rings to shiny smooth top.  I got so inspired, I waxed the front and rear rip fence rails as well as the two faces of the rip fence so things would slide beautifully across the top.  I even waxed the splitter so there would be less friction should a board rubbed against it during a rip cut. I even went a little nuts and checked the blade/fence/miter slot alignment… it was all well within spec.  Tonight, I’ll take the blades out, give them a once-over for pitch and hit them with a little dry blade lube.

Hey, I want to thank all of you out there for keeping an eye on the shop and preventing me from letting my tools suffer the abuse of neglect!

8 thoughts on “In tip-top condition”