For the first few years of my woodworking hobby, I struggled along without one of the most important shop tools. I would make do, use work-arounds and sometimes even do dangerous things because I had not yet gotten one of these important devices. I even got hurt once because I didn’t have one attached to my bench and was working dangerously.

Without a doubt, my bench vises are two of the most important tools in the shop.  They are both very different models that ended up in my shop in non-traditional ways (like going to a woodworking store and dropping a small fortune). I like both of them and if I recall correctly, both ended up in my shop for a grand total of about $25. 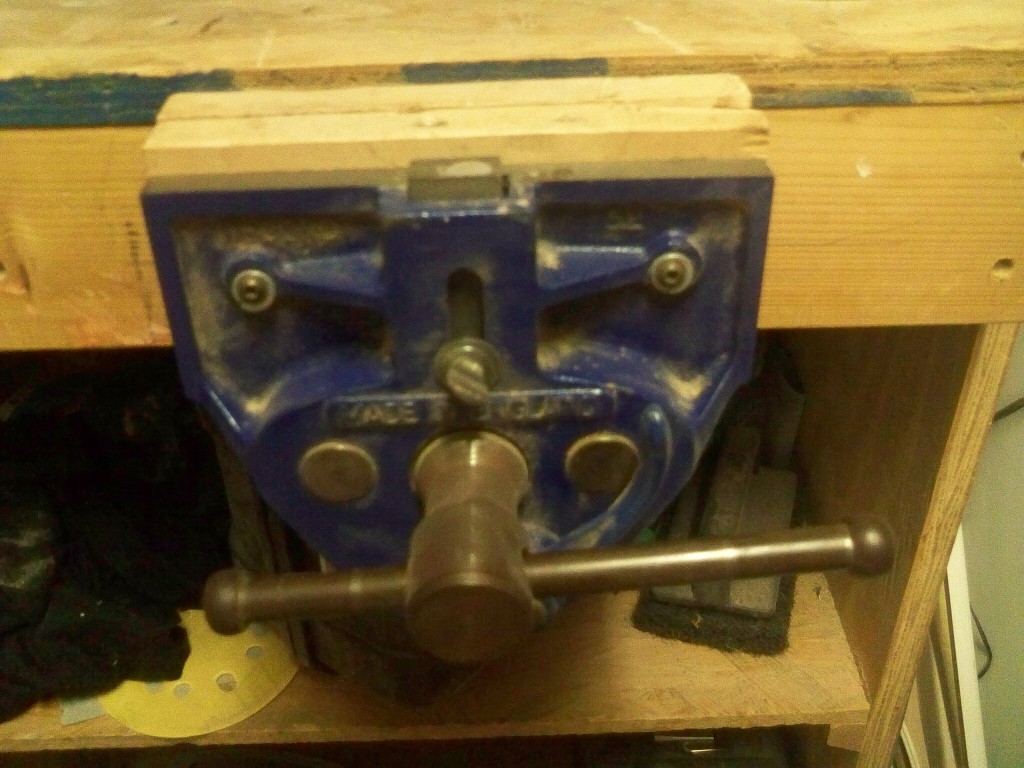 The first one is on my front affixed bench. This is a Record quick-action vise that I picked up at a Big Lots store.  Yes, that’s right – a super cheap discount store that normally sells very poorly-built tools at an enormous discount. I had to go to the store to pick up some inexpensive holiday wrapping paper and moseyed over to the tool aisle to see what was being offered that day. I almost didn’t see the vise at first – the box was scuffed up and buried under a pile of nylon shop aprons. Most of the internal packing was missing, so the heavy iron vise slid around in the box when I picked it up, threatening to fall out onto the floor. When I saw that it was a woodworking vise and how inexpensive it was, I had to get it on the spot.

It took some time to fit onto my front workbench, and I’m sure that I did a ham-fisted job of getting it into place, but it works like a champ for me. In fact, I used to do all of my planing at this front bench.  Unfortunately, the location of the fixed bench was so awkward, it became impractical to work at that location.

It was about then that I got the idea of building my first bench – a discarded entry door from a neighbor attached to a 2 x 4 stand. I was reluctant to move the vise from the front bench to the new one, because I had notched out the framing on the fixed front bench and didn’t want to look at rough opening.

What I needed was a way to get my hands on a second vise.  Inexpensively.

I had been lamenting my workshop situation with my friend Chris down the street. Chris works in the maintenance department of a local educational institution and was struck by an idea. That’s when the fates heard my call and I had the opportunity to get this. 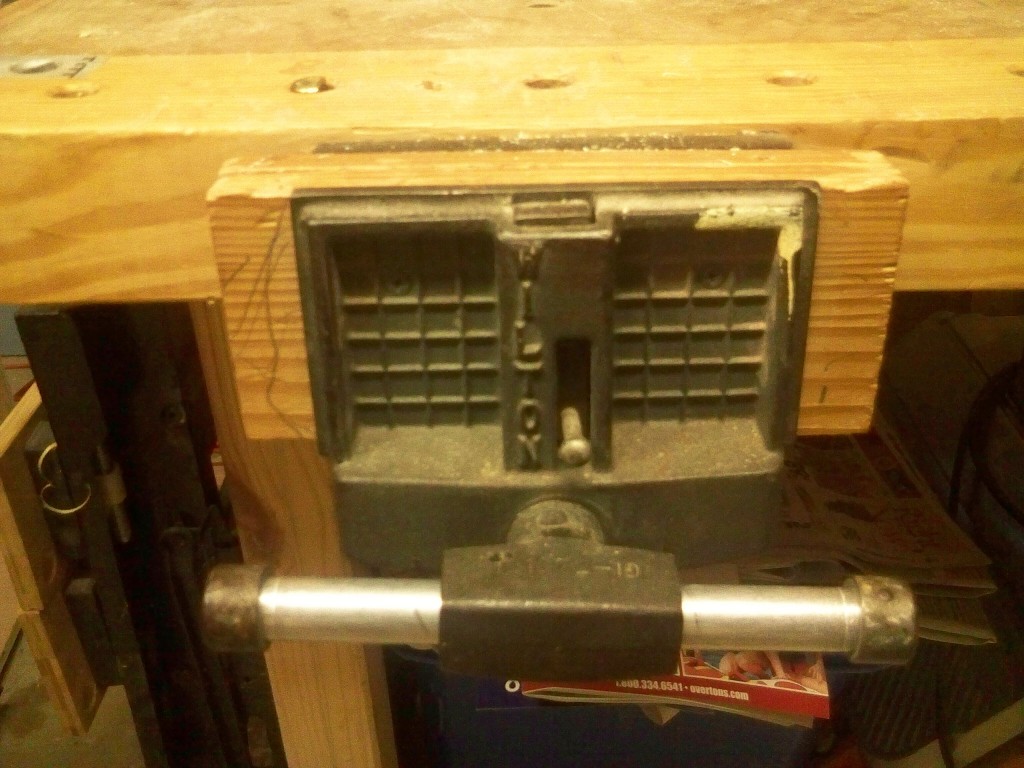 This is an old-school 1970’s era Wilton vise. Chris was able to pluck it lovingly from a dumpster – something that was ready to be shipped out to be busted up and recycled for its metal content. At first sight, I could understand why it was headed to the dumpster.  It was covered in rust and paint splatters. The original handle was missing, replaced by a length of electrical conduit. And, it stank, having sat next to some rather gross items in the trash.  But, my buddy had dived into the dumpster for me, and I was going to have to give it a chance to work.

I disassembled the vise down to its component pieces and cleaned and scrubbed the vise with WD-40 and an old toothbrush, removing decades of grime and other nastiness. When I reassembled it, it functioned beautifully.  No, it’s not a quick release model, so it does take some time to twist the handle to make it fit the board I am working on, but that hasn’t been a hassle for me. I mounted it to my old bench, then moved it over to the new one I built around the holidays in 2008. It still works beautifully, and it’s position on the bench makes it easy for me to get work done with both power and hand tools.

No, these are not hand-crafted leg or shoulder vises, nor are they high-end fancy models from an elite manufacturer.  But, I couldn’t see working without them in my shop.

Just remember to keep your eyes open for deals out there.  Let your friends know. You might be surprised at what you can find on the cheap.

2 thoughts on “Pair-a-vise(s) Under Workshop Lights”