Since I’ve been on reduced duty this week recovering from my run in with the hedge trimmers, I’ve had a lot of time to watch movies, play games with the kids and read.  And, boy, have I read.  The librarians are getting tired of seeing me.

Libraries are great places to go.  There are tens of thousands of books on the shelves on all different kind of topics.  Wine. Travel. Woodworking. Music.  You can’t go wrong…

And, there are some of those books you want to borrow again and again. 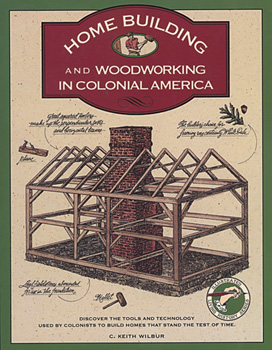 C. Keith Wilbur’s Home Building and Woodworking in Colonial America (ISBN-13: 978-1564400192) is one of those books. Lavishly illustrated throughout, Wilbur takes readers through the process of home building from the selection and felling of trees for the timber frame to the plastering and white wash on the walls.  Each step is shown in the kind of detail that will leave the history minded woodworker intrigued for a good long while.

For instance, the action starts right on page one… Wilbur begins with a one page description of how the European settlers had over harvested the trees back in the homeland and the feeling of joy they experienced when they saw the enormous tree stands in North America.  The page also explains how the Royal Navy surveyors branded with the King’s broad arrow every single white pine with a diameter of two feet or greater for use as masts on new ships.

Later pages describe how the Colonists improved on the British trade axe to design a more efficient chopping design.  The proper way to select and fell a tree while using just an axe. The tools and processes used to buck the longer logs to more manageable sizes.  Hauling them out of the forest. Squaring the timbers.  Stacking and seasoning the timbers to get them ready for construction.

I was amazed by the way Wilbur constantly illustrated how conditions in the American Colonies dictated the construction techniques and designs in order to address local climactic conditions.  For example, homes built in New England were primarily built with a central chimney stack in order to retain as much heat as possible during the brutally cold winters.  In southern colonies, it was a better idea to move the chimney stack to the outside of the house in order to better control the heat gain in the milder winters and while cooking during the summer months.

As an unexpected bonus, Wilbur throws in a chapter dedicated to the evolution of common woodworking tools.  From prehistoric times through Egyptian, Greek, Roman and medieval times until the colonial American era. Axes, adzes, chisels, planes… they are in there.

I have only scratched the surface of what’s offered in this book. If you are a fan of old school woodworking, you can do a whole lot worse than picking up a copy of this book.  And, after I change my finger dressing this morning, I will be reading more during breakfast.

Pretty cool, eh?  I had no idea back in 2007 that I was going to get this far.  I hope that during my run so far at Tom’s Workbench that I am able to provide you with a few laughs on our journey into woodworking.  Thanks for reading!