Wow.  What a weekend.  My family and I just got back from a quick vacation to the oldest continuously occupied European settlement in North America – St. Augustine.

Now, it was so impressive standing in the Castillo de San Marcos, walking down Caroline Street (the oldest street in the United States) and being tempted to sip from the Fountain of Youth.  It was fun taking one of the ghost tours, seeing where the first Catholic mass was celebrated in North America and sampling the beers at the A1A Ale Works (if you ever find yourself in St. Augustine, you owe it to yourself to try the beer cheese soup at A1A). But, by far, one of the most breathtaking stops is the old Ponce de Leon hotel, now part of Flagler College.  Henry Flagler, a railroad tycoon who opened up the east coast of Florida to tourists, had built the buildings to be one of the most lavish and impressive structures in the city.  He built the structure in the 1880’s complete with running water, electricity (brought to the hotel by Flagler’s good friend Thomas Alva Edison) and one of the most valuable collections of Tiffany glass in the country.

While the buildings today are all part of the working college, the impressive plaster work, art pieces and unbelievable woodwork are all there for visitors to see. And, wow, what woodwork was there! From your first step into the grand rotunda, your head will be spinning as you look at the impressive oak woodwork and plaster frescoes.

While the entry rotunda is impressive all by itself, when you are led into the student’s dining hall, your jaw will hit the floor.  Of course it’s first life wasn’t for slinging hash for hungry college kids – some of the most well heeled and rich folks took meals with Mr. Flagler.  Having been a student at the University of Maryland and eating in their dining halls, I was stunned.  Besides the stunning Tiffany windows that frame the views onto the grounds, the amazing woodwork and plaster paintings make it difficult to believe that students take their regular meals there. 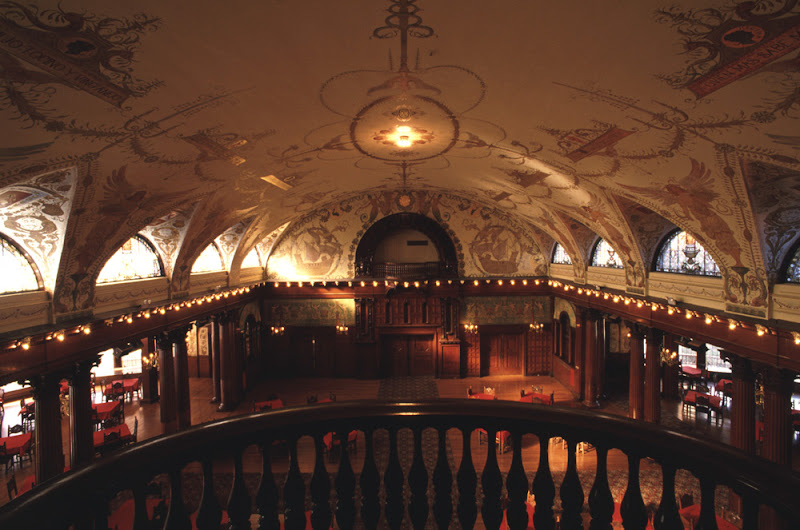 Now, even MORE interesting are the chairs the students sit on.  When Mr. Flagler commissioned the furniture for his hotel, he – of course – went to only the finest artisans he could hire. Again, he turned to  Tiffany and Sons to carve some elegant dining chairs to match the original mahogany tables.  The chairs were stoutly made, with full mortise and tenon construction, with intricate brass tacks securing the horsehair stuffed leather tops.  The original chairs also have casters on the front two legs of the chairs, so they can easily be swung out from the table to allow the ladies wearing the heavy dresses and gowns of the day easier access.

Over the years, many of the original chairs were sold at auction, and many reproductions were commissioned, which roughly mimic the appearance of the originals.  While many have been sold off, there are still a few of the original Tiffany pieces on the dining room floor… where students today can sit in and take in a bite to eat.

I could go on for a while longer, but I still have to unpack dirty laundry and get ready for work tomorrow. But, if you are a woodworker and find yourself in St. Augustine, Florida… well… bring your camera and get ready to drool.

4 thoughts on “A woodworking vacation”