Screws play such a vital role in woodworking, it’s only fitting that they get some discussion.  I mean, think about all of the different uses there are for screws in your shop.  You might find that my experience alone might be typical…

I use screws to hold plywood projects together.  Sure, I could cut dovetails or other joints in the plywood, but I’d be hard pressed to find another cabinetry joint that works as well or is as easy to cut as a dado or rabbet reinforced with glue and screws.

Pocket hole joinery has made it easier to assemble cabinets and other projects without visible fasteners – if you plan and drill your holes properly.

And, the aren’t only for plywood projects.  I screwed together several solid wood projects when I first started, and used wood plugs to hide the evidence.  The result was very neat and tidy with tight joints all around.  Even masters such as Sam Maloof will use screws to reinforce the joint between the back posts of his chairs and the seat.

What about hinges?  Even the European cup hinges rely on screws to make a permanent connection to the project. Unless you build your own drawer runners out of wood, you will probably use metal ones joined with – yup- screws to the drawer and the cabinet.

Some of the things I have learned about screws over the past decade of woodworking include:

* Always predrill your holes. Sure, you can muscle your screws in with your drill, but you run the chance of splitting the pieces you are driving into.  A combination drill/countersink and driver is an inexpensive way to handle the predrilling and countersinking in one step, and then driving the screw by simply flipping the tip of the tool around.  These are sold at just about every home improvement or hardware store, and I have yet to see one cost more than $10.

* Stop the wobble. Driving long screws with a power driver can really be frustrating.  Watching the screw gyrate during driving while holding the drill with one hand and the work with the other is entertaining for observers, but can lead to some very choice words by the woodworker.  I have found that inexpensive screw guides, which fit into your drill’s chuck and feature magnetic tips and a sleeve that helps hold the screw straight – are worth their weight in gold.

* Drywall screws are for drywall. Sure, every woodworker starts off with a box of black drywall screws to start.  And, they tend to drive in pretty well in pine projects.  If you give some premium screws a chance, you might be surprised with the difference.  I have purchased screws from McFeely’s in the past, and these babies can bring you to tears.  They never snap and drive like a dream. 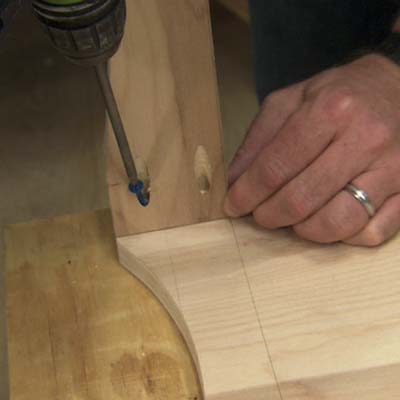 * Watch for bridging. Screws threaded along their entire shanks (from tip to head) have a nasty habit of forcing the two workpieces apart as they are driven home.  That’s called bridging, and it can be a big issue.  Three ways to counter this include tightly clamping the pieces you are screwing together, drilling a larger countersink hole in the top board so the threads won’t bite into the  wood or using screws that aren’t threaded all the way to the head.  This is a common feature found on premium wood screws.

* Let it slide. Sometimes, especially on longer screws, the amount of friction you build in the driving process can stop the screw dead in its tracks.  A little candle wax or the goop found in a toilet wax ring (please use a fresh clean one) can lube the screws and make them drive easier.  I’ve been told to avoid soap, because soap does attract moisture from the atmosphere, potentially leading to rust issues.

* Watch your material. Screws are made out of several different metals.  While steel screws are definitely the easiest to find, brass and bronze screws are also available, and these more delicate materials need extra care while driving. I have had a great deal of success with driving brass screws if I drive an identically sized steel screw into the hole first to cut the threads.  After removing the steel screw, the brass screw goes in with little hassle.

* Use the clutch. There’s a reason why your cordless drill has a clutch setting.  It senses when the torque rises to a high level and then allows the drive to slip, preventing overdriving of the screws, stripped heads and broken shanks.  Learn how to use the clutch and you’ll be a happy camper.

Are screws appropriate for every project?  Heck no.  Sometimes, there’s nothing quite like that wood-to-wood connection.  The feel of tight joinery and the pride of saying, “Hey, look what I built.”

However, it’s difficut to argue with the speed, strength and convenicence of screws in the shop.  They will always have a place.

One thought on “A turn of the screw”