Hammer veneering is actually not all that tough.  This was my first time trying it, and I was pretty impressed with the results.  In fact, for an initial investment in a veneer hammer and some hide glue, I feel I am well on your way to making some pretty sweet veneer layups!

Here’s what I needed to start – A veneer hammer, hide glue and a way to mix it up, some veneer, substrate (which can be MDF, particle board, plywood or the like) and veneer softener.

I picked up my veneer and some Super Soft 2 veneer softener from Joe Gorleski over at Veneer Supplies.  The veneer is some flat sapele pomelle… some cool stuff. Since the veneer is already flat, it’s easy to just spray on the Super Soft, let the surface dry and stack the sheets overnight between some brown building paper under a piece of Corian as a platen.

Meanwhile, I whipped up a batch of hide glue, letting the granules soak in water overnight and later heating them in a hot pot to 145 degrees F.

When I was ready to start the process, I brushed off the piece of 1/4″ plywood to get any dust off of it, and slathered a liberal amount of hide glue on the piece, making sure I got a nice, even coverage on the substrate’s surface. You shouldn’t have to race from here, but hide glue’s legendary quick setting time means now is not the time to make a sandwich, call your bookie or ‘answer the call of nature.’

I retrieved the sheet of veneer and simply laid it down on top of the glued surface.  I tried to keep it roughly centered, but I knew I could still shift it around. 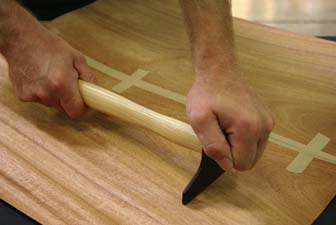 Now comes the fun part – I took the hammer and used the broad ‘blade’ end like a squeegee (Don’t beat on the piece with the ‘hammer’ – that’s not what it’s used for!), pressing the veneer down to the surface.

Sure, there were gushes of glue coming from under the veneer.   Seemed normal. I got some glue on the surface of the veneer.  Not only did it seem normal, but the glue helped the hammer’s blade glide over the surface.  The piece did slide initially.  Again, it seemed totally normal. After a while, I could start to feel the veneer ‘grabbing’ the substrate.

I kept working from the middle to the outside.  Remember, I was pushing air bubbles and extra glue out from under the veneer so the bond would become even stronger.

Here’s a hint – push gently when going across the grain of the veneer.  The piece may split of you push too aggressively.  I saved the final firm pushes for along the grain.

When I was done, I had a gloppy mess and a veneer that had a few ‘bubbles’ under the surface.  Seemed normal to me.  What I did was get a wet cloth and started mopping up the mess, rinsing frequently.  Then, I started wiping off the veneer surface, getting the majority of the glue off.  Sure, it looked like I was making a mess, but that wiping will help make finishing easier and it made the veneer just a little more supple so it wouldn’t split the drying process.

After I cleaned up, I repeated the process and veneered the other side (the piece is going to be a lid and a bottom for a box I’m making – I wanted both sides covered).

After the last clean up, I wrapped the piece in more brown building paper and put it under the platen until it dried.

In the morning, I had a perfectly veneered piece of plywood, ready to be gently sanded, cut to size and put into the project.

Did I make mistakes?  Heck yeah.  I still have a lot to learn.  For a first attempt, it was faster than I expected and the results were pretty cool.  No doubt I’ll have to improve my technique, but I’m liking this new skill a lot.

And, I didn’t have to wear those throwback baggy pants…