What separates an ‘OK’ woodworker from one who has a passion for the craft? Sometimes, it’s as simple as encountering someone who can show a new, interesting way of looking at things. For Wood Magazine’s contributing craftsman Jim Heavey, showing the way for others is something that – due to a family tragedy – he took to at an early age.

Jim’s dad passed away when he was in grade school. Out of necessity, Jim assumed a leadership role as the man of the house at an very early age. “Being the oldest of seven kids in a household with very little money, repairs and projects around the house fell to me. I think that it was there that I developed an appreciation for woodworking and the sense of accomplishment that completing a project brings.”

Later in his life, Jim’s leadership ability again came to the fore. He even served as his children’s school board president for 16 years – all this after doing his ‘day job’ as a firefighter. His years at this important position allowed him to hone his presentation skills considerably. “Having audiences both happy and irate – sometimes at the same time – kept me on my toes and helped me develop a style that people seem to enjoy. I don’t take myself too seriously and I think that I can relate to my audiences.”

Does he ever! Jim’s easily approachable style allowed him to marry his love of woodworking and presenting when he landed a position doing tool demonstrations for the Skil tool company at the now-defunct Builder’s Square home improvement stores. When Bosch bought Skil, Jim’s expertise was recognized, and he was chosen to present at national shows. One day in 1996 at one of these national shows, a Wood Magazine representative approached Jim to fill in for an ailing presenter. The rest, as they say, is history.

Jim has been teaching at the Woodworking Shows for Wood Magazine ever since. You can find Jim at the Wood Magazine demonstration booth, teaching tips and techniques to dozens of very interested woodworkers. While you might assume his presentations are just tool or magazine sales pitches, Jim always keep his focus firmly on helping the audience learn new techniques. “What I enjoy the most is being able to bring enough content to the presentations to touch some aspect in every attendee’s shop experience. We have a wide skill level in attendance at the shows and I am so glad when people will say, ‘Thanks, I learned something new today.’ The challenge is to remember that I’m not selling the tools, I’m imparting knowledge. A good tool sells itself and I’ll use it to its best advantage but I want them to learn something.” 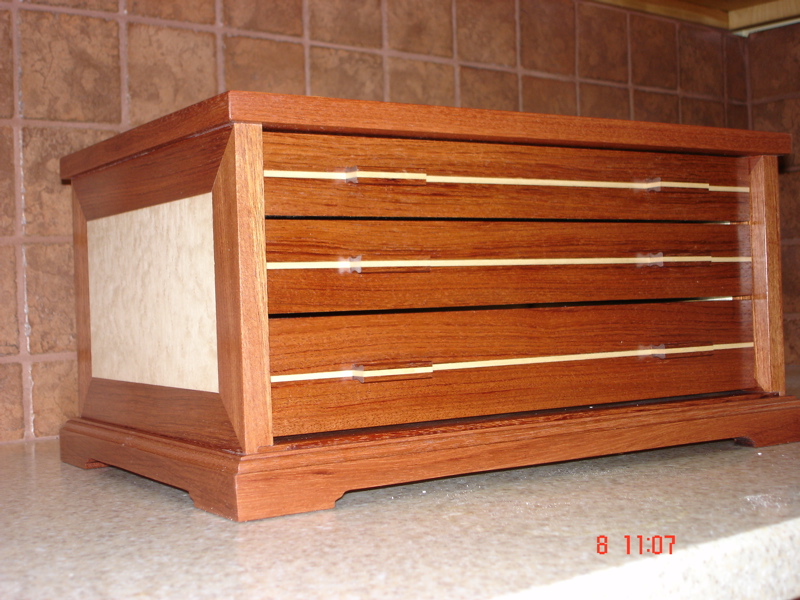 Learn something they do. The day I met Jim at the Woodworking Show in Tampa, he was demonstrating a very simple yet elegant way to embellish a project by using an applique technique.

By cutting a shape out of a contrasting piece of wood – a leaf pattern, for example – and gluing it on the surface of the project, then sanding it down to about one sixteenth of an inch with a belt sander, anyone can create an interesting design feature with minimal work.

“I do like to watch the faces of the attendees when they see that a topic I’m talking about suddenly look so simple to them. It’s that ‘ah-ha’ moment. My hope is that attendees will try some of the techniques that I use. When they find success, they will take one more step that brings additional success. It’s very rewarding to talk to someone who had watched and tried something that they learned come back the following year even more excited about their craft.”

What’s the toughest part of the job? “The traveling part can be very tiresome. There seems to be a different TSA standard in each of the 30+ airports I’ll see in a season.”

“But,” Jim continues,”when you see the crowds at the door, you know it’s show time. They expect a good experience and I really do enjoy giving it to them.”

“In the end, a one on one discussion with a fellow woodworker brings out our commonality regardless of locale. It must be in the wood,” Jim laughs, “or maybe it’s the high from applying lacquer.”