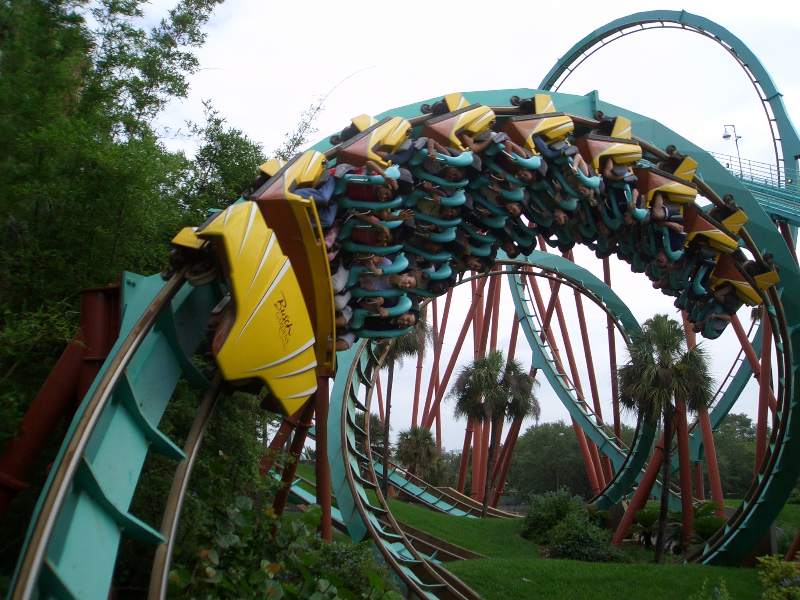 I’ll remember it like the day it happened. I was standing in Busch Gardens, the Dark Continent in Tampa one steamy August afternoon. Looking up, my sight fell upon the aqua and red tracks of Kumba, the new enormous roller coaster the park had just opened. 143 feet tall. 114 foot vertical loop. Batwing maneuvers. Not one, but TWO inverted cobra rolls. This thing was a monster.

As the train whooshed by at 60 miles per hour, I could feel myself being knocked backward by the rush of air and deafened by the roar.

And, I was in line to take a ride on it.

I grew up in a family where my mom couldn’t stand to see her sons in peril. She cringed through six football seasons as my younger brother took to the gridiron. We grew up within short driving distance of a ski resort, but never went because it was too dangerous. Needless to say, whenever we went anywhere with a roller coaster, we were told just how perilous they were.

So, you could imagine my fear when I boarded the train – my first real roller coaster train – and it started to go up the lift hill.

Now, sure, it may not be as dramatic as that first rush down the hill in the coaster, but why do I sometimes feel the same apprehension before trying anything new when I woodwork?

For instance, a few years ago, I was building a shadow box for my dad to house his military badges and medals. I found some choice maple that would be perfect when finished. I also found a nice scrap of cherry molding that would be just long enough to dress the piece up and serve as a glass stop. Everything was going to be perfect.

In order to make this piece extra special, I decided I was going to use dovetails. My first ones. Ever. Gulp.

No one could accuse me of not doing my homework. I read everything I could get my hands on about machine vs. hand cut. I visited every woodworking forum I could think of. I asked every woodworker I knew for their opinion.

Finally, after nearly two months of weighing my options, I went to my local Woodcraft, walking with the swagger of a seasoned woodworking veteran, and headed straight to the dovetail jigs. When I got there, I froze. The choices were staggering. Akeda. Leigh. Shop Fox. Stots Template Master. I had that blank look in my face when one of the employees walked up and asked me what I was looking for.

When I told him I was a complete novice and never had even seen a dovetail jig before, he recommended the Keller setup. I plunked down my hard earned dead presidents and headed to the car.

When I got home, there was no bravado or swagger left. I found myself staring at the manual, trying to make heads or tails of what I was reading. Tentatively, I assembled the jig and put the bit in the collet. I laid the router down, wood clamped to the jig, and walked inside.

Six days later, when I finally got the courage up to actually make a cut into the lumber I had lovingly jointed, planed and cut to length, I gingerly stepped into the shop and plugged the router in. The router whined to life and, after stopping six or seven times to ensure everything was the way it had to be, I touched bit to wood and stared cutting. Sawdust flew everywhere. Cut, cut, cut.

When I was done, I flipped the jig around and cut the pins. Cut, cut, cut.

Much to my amazement, the joint slipped together – perfectly – on the first try. I was so jacked, I took the pieces inside and showed my wife, who happened to be taking a nap on the family room sofa.

“Wha… Oh, that’s great.” She closed her eyes and lay back down to sleep.

I walked back to the shop, and proceeded to cut the rest of the joints. That afternoon, I had met dovetails, and I had kicked their butts.

When I stepped off Kumba after my first ride, I was pumping my fist in the air.

Now, THAT’S what I’m talking about!

After that, I looked at all roller coasters with a sense of anticipation. “Honey, when can we go to Sandusky, Ohio to ride the coasters up there?” I want a new challenge.

Funny how that first success can breed so much confidence…

2 thoughts on “The Roller Coaster ride of experience”