Get a group of woodworkers together, and, eventually, the topic of Norm Abram will come up. 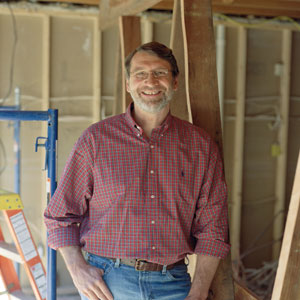 It’s not difficult to figure out why. He’s been a fixture on This Old House since the show’s inception in 1979 – nearly three decades. This year, the New Yankee Workshop marks its 20th anniversary.

He’s built projects that can fit in nearly every room of the house – including the workshop! Different period styles – from the plain, strong lines of Shaker to the ornate Hepplewhite – have been tackled in detail. He’s worked with high-tech plywood and antique timbers.

His plaid shirts, safety glasses and beard are as essential to his persona as Santa Claus’ red, fur-trimmed suit and black boots.

One other thing Norm does is bring strong opinions to the surface. Some woodworkers see him as a bad influence, cheapening the craft. Their knocks on Norm include:

Now, for all of the knocks Norm takes, there are many more supporters out there. Their arguments include:

So, where does this leave us? In my opinion, the case against Norm is overblown. He may have his detractors, but the contribution the guy has made to the craft can’t be ignored. If it wasn’t for Norm, where would This Old House – and the scores of home improvement shows that have followed since – be? How many folks would not have taken up the craft? And, with fewer woodworkers, how many manufacturers would have been so innovative over the past decade, bringing affordable new technology to the home workshop?

What are your thoughts? How do you think history will judge the New Yankee Woodworker?