A quarterback spies an open receiver down the field and throws the ball with tremendous velocity and extreme accuracy to a place where only his guy has the ability to catch it. A sports car that pours power from its highly tuned engine, yet allows the driver to turn a corner as if she’s riding on rails. A gymnast generates an awesome swinging speed, launches herself into the air above the parallel bars with such precision that she merely has to extend her hands to catch the bar, saving her from an terrible fall to the floor.

Raw power is a great thing, but without precision, it can leave things a mess. That’s especially true with it comes to power tools. When you are talking about fractions of an inch meaning the difference between a perfectly fitting joint and one that’s suitable for the scrap heap, being able to put your power in the right place means a lot.

For about the past nine years, when I needed to rout something in a table set up, I would turn to my trusty, second hand Freud FT2000 router I had bought from a friend. And, for years, it did a fair job. Oh, it had the power to spin big bits – cope and stile, panel raisers.. the works.

The biggest problem I had was that there was no above the table adjustment for setting cutting depth on the bit I was working on. In order to get things to the right height, I would have to hold my set up block or bit height gauge over the bit, duck down under the table to grab the adjustment knob (the old router was a plunge model I removed the spring from) and spin it until I got close, then look above the table, trying to spin the knob to get the exact height. Sometimes, I was right on. Other times, well, let’s just say that with the fire pit season closing in here in Florida, there soon won’t be any evidence of my mistakes.

The other pain in the butt with this router set up was that I had to pull the entire router assembly out of the table to change bits. Not a problem if I was using a pattern bit with a bearing, but if I had a fence set up, I had disassemble the entire set up and reset everything from scratch. A total time waster.

All of this changed when David Venditto of Infinity Cutting Tools asked me at lunch one day, “So, what’s your router set up like?” I told him my tale of woe, and before you know it, David asked me to swing by his old Tampa location. He had something for me.

This is quite a something! Infinity is now carrying the fully redesigned Triton 3 1/4 hp plunge router. This is one extreme bit of tooling.

First of all, I was terrified that it would be a brute. The old router I was replacing was very heavy unit that screamed when you turned it on and vibrated the table to no end. The Triton, while loud, is nothing like the old one. It also has very little vibration, spinning the bit with ease.

And, does it ever have power! I was using my cope and stick door set, and the router didn’t bog down once. It poured out the power smoothly and evenly throughout the cut while I made full-depth passes. Rock solid.

The other feature I love about this router are the above the table adjustment features. Sure, you could go with a router and a separate router lift, but when one machine does the deed, that’s just pure gold. This router is set for that kind of operation. First, it’s easy to remove the plunge spring from the unit if you are going to dedicate it to the router table. (I already have two hand-held routers for above the table work, and won’t be needing a third). From there, a handle can drop through a hole in the router plate to adjust the height of the bit from above the table. This makes setting the depth a whole lot easier. 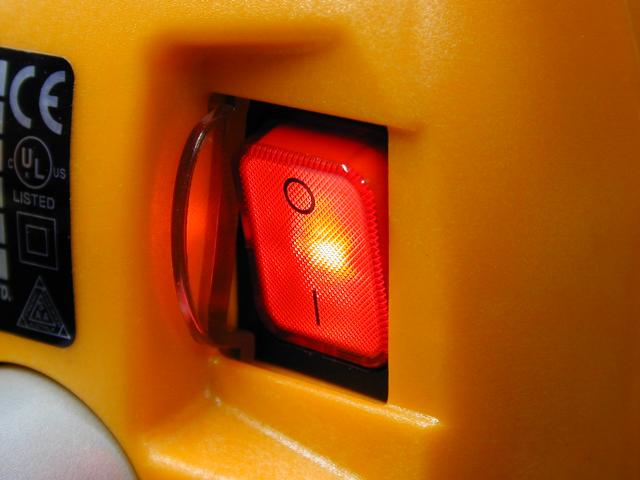 And, another cool feature of this router is that a spindle lock/safety is incorporated into the switch. When the switch is off, a clear plastic shield prevents the switch from being bumped. When it covers the switch, it also locks the spindle on the router, allowing for simple one-tool bit changes above the table. Where has this feature been all of my life?

The unit also features a sealed area around the bit with an integral dust collection port. This, paired with a dust collection fitting on your fence, should be able to keep your work area clean of dust.

I still have yet to totally put the router through its paces, but I can tell you from what I have seen, it has this whole power and precision thing down cold.

5 thoughts on “Strength and precision”