Docked along the shores of Camden, New Jersey is a piece of American history. Her keel was laid down in 1940 just across the Delaware River at the Philadelphia Naval Shipyard.  She is the most decorated battleship in naval history, and she’s named after the Garden State, The USS New Jersey.

With a length of 887 feet from bow to stern, the Big J supported naval operations from World War II through the Gulf War in the early 1990s – an astonishing career that spanned half a century.

While I was obviously interested in seeing the massive ship up close and in person, one thing I needed to see was her legendary teak decks. On all of the nation’s battleships, the steel bomb decks were covered with teak. I do know why teak was chosen – its legendary resistance to decay and hardness were definite assets. But, I’m not sure why teak over just plain steel decks. Perhaps it was to show how much power the United States wielded, and since these battle wagons were routinely used as flag ships for admirals and presidents, additional enhancements were called for. 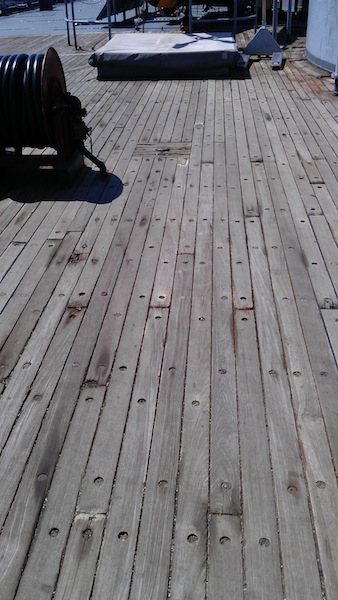 What stunned me, though, were the condition of her teak decks. You see, the USS New Jersey was recommissioned as a warship back in 1982. At that time, she was outfitted with the latest weapons systems, and her teak deck was brought back to beautiful shape. While she sailed, part of the daily maintenance routine was a process called Holystoning. This included meticulously scrubbing down the teak decks with pieces of sandstone to bring the wood back to a splendid brilliance. It was backbreaking work done originally on one’s knees, and since the stones were about the size of a shipboard bible, you can understand how the process got its name. 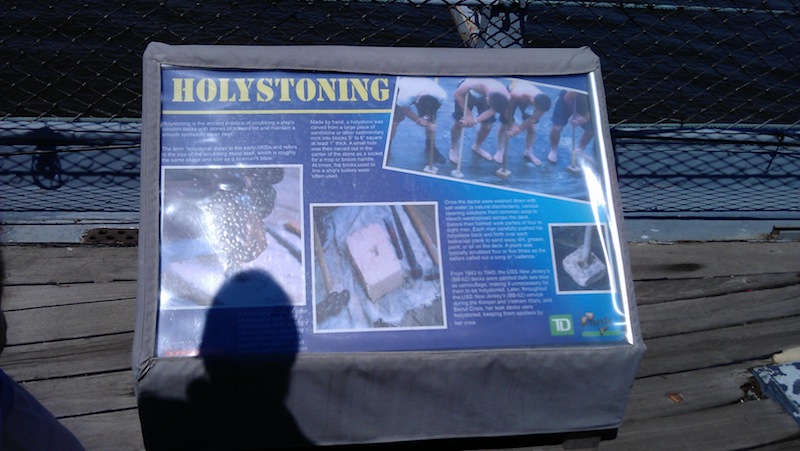 After the Gulf War, she was decommissioned again and spent nearly a decade as part of the mothball fleet at the yards in Bremerton, Washington. While there, her gorgeous teak decks began to weather badly. The routine  maintenance that kept them ship shape was not done, and the rough planks I was walking on was proof of what the ravages of time and deferred maintenance could do. 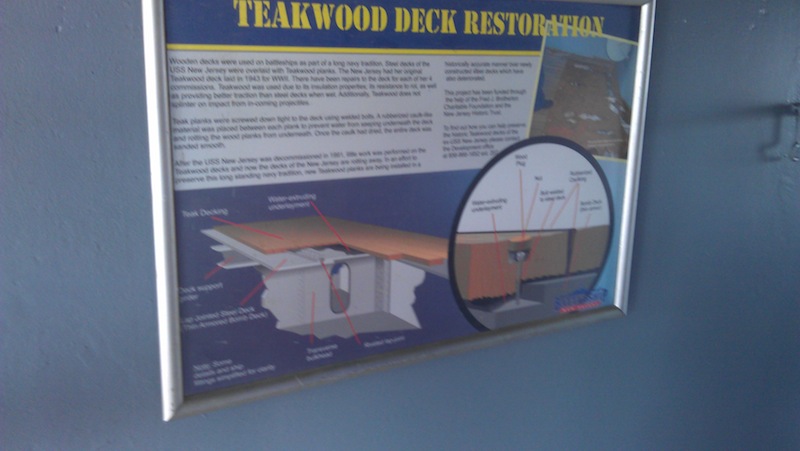 Fortunately, the non-profit organization that runs the Battleship New Jersey museum is undertaking an aggressive campaign to raise money to restore the decks to their pristine condition. A big part of the effort was reanalyzing how the decks were attached in the first place. That was a fascinating process, which involved bolts attached through the ship’s top armor and some massive plugs to hide the hardware. Each gap then had to be caulked to ensure it would remain watertight.  The biggest challenge was that places where the old wood was removed, there was tremendous rust damage. All of this badly eroded steel had to be cut free and replaced or repaired before the teak could be reattached. 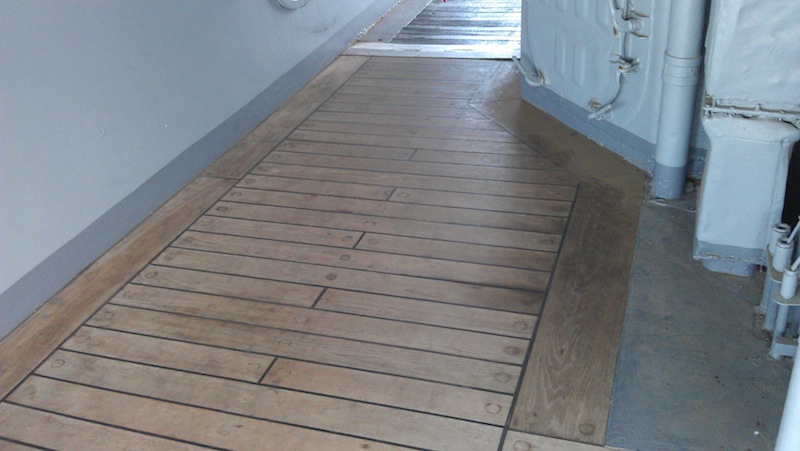 But, where those repairs had been done… wow.  The craftsmanship was just awesome, and the teak just glowed. The ship will be quite a sight when its wooden decks are restored to the way they once were.

Now, with today being Independence Day – and the debt of gratitude that we owe each of the sailors and other service personnel who help keep our freedoms secure – it’s only appropriate that we celebrate the day with some fireworks. None were bigger than came out of the 16 inch barrels of Big J and her sister ships, the Iowa, Missouri and Wisconsin. 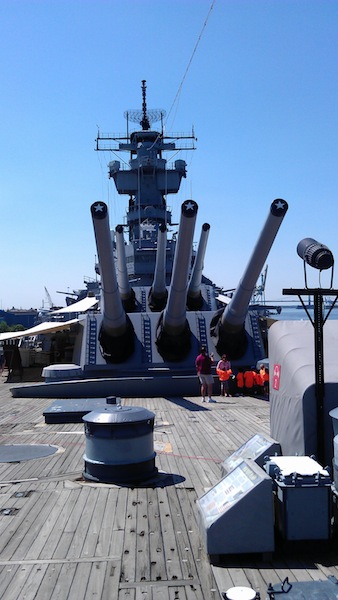 2 thoughts on “Some teak … with firepower”