Oh, yes, it was SO good in 2010, you know I just had to come back for more!  I just can’t get enough of the Great American Teach In… even  though some of the questions were a little more pointed… 🙂

My day began last Thursday by driving my youngest son in to his school, where they had some great coffee. Jet fuel for the soul. There, I delivered three talks to two fifth grade and one fourth grade classes. Unlike last year, where I just spoke about tools, this year I cut several samples of joints, showed how they worked together and even showed off my blog. 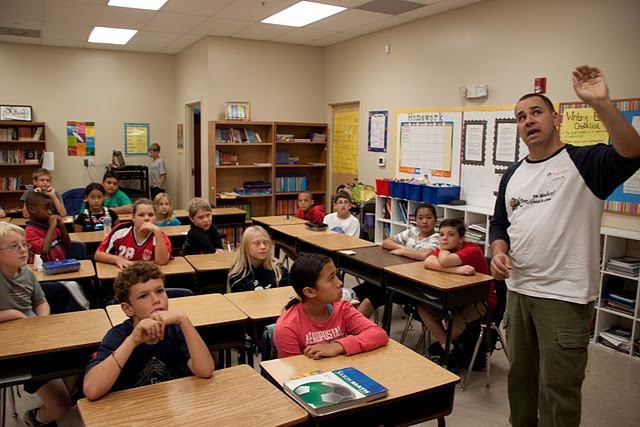 After the third session at my youngest son’s school, I packed up my materials and headed down the road a ways to my oldest son’s middle school. I was surprised when I got there that I had a lot of time available before my first class… and I was going to be fed lunch.  The food was delicious, but it was a little intimidating being in a room with about a dozen SWAT officers from the Pinellas Park Police Department.

After I ate, a student helped guide me down the hallway to where I set up for my next classes – the science lab. It was a great room with plenty of space for me to spread my stuff out and really get into things. I also set up my little video camera and had my son Dominic operate it. Yes, you can hear him piping up from time to time during the talk.

After a full day of seven classes, working with more than 300 kids, I was totally whipped. Next year, I need to wear my athletic shoes and bring some Advil.

Now, after talking about tools and joinery, I’m going to have to find another topic to talk about next year….  But, at least I have a full year to think about it.

2 thoughts on “The Shop Monkey returns for more!”