Back in late 1999, I was still just a budding novice woodworker (sometimes it’s tough to tell that I have improved any), I wanted to build a new project. I think this was my third. But, what to build? I had already built something for my wife.

There was also someone else who was very special in my house – my oldest (and my only at the time) son Dominic. I had already missed the window to build him a cradle. I could have built something practical like a bookshelf, but where’s the fun in that?  That’s when I decided on a rocking horse.  And, I think it’s safe to say that the client was pleased. 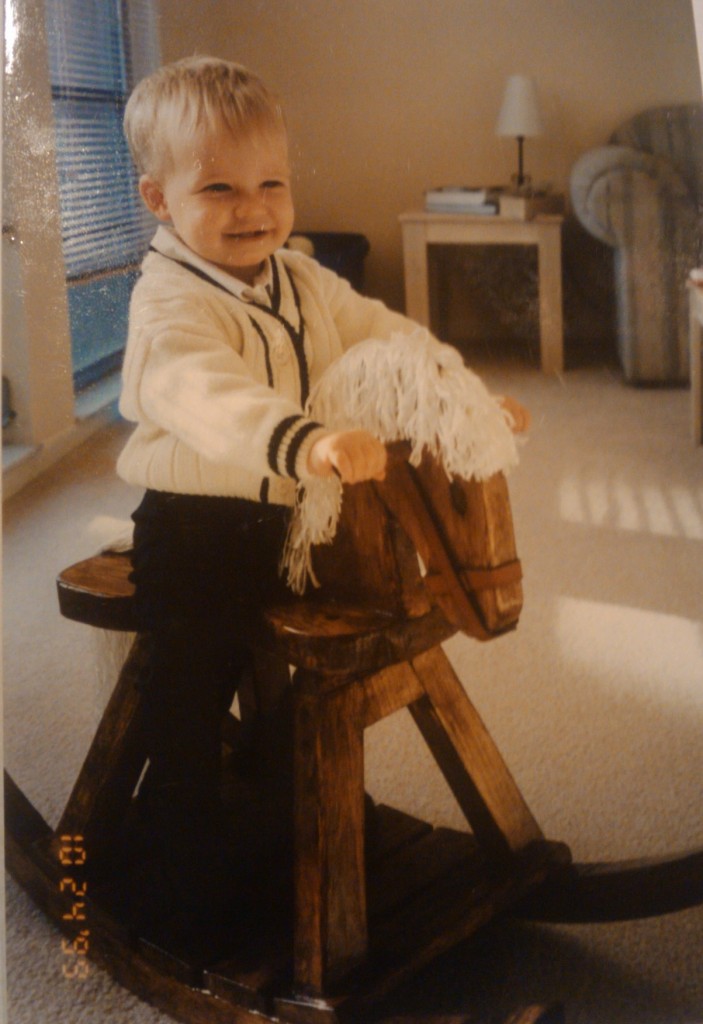 Fast forward a dozen years. Marc Spagnuolo is running a charity build where he’s donating $1 for every completed rocking horse plan that is built.  I have been building a rocking horse or cradle to donate to a local pregnancy crisis center every holiday season. And, that little boy who loved his rocking horse so much has been bugging me to get more shop time.

Thus, a plan was born.

So, this weekend, Dominic and I went to the nearby Lowe’s to pick up a glued up project panel and the other supplies. And, we had to make two trips to the local print shop to get the plans enlarged to the right size.  Apparently, 200% in one FedEx store doesn’t mean 200%.  But, Emily at the local shop was able to get everything printed up nicely, and we were off to the races. 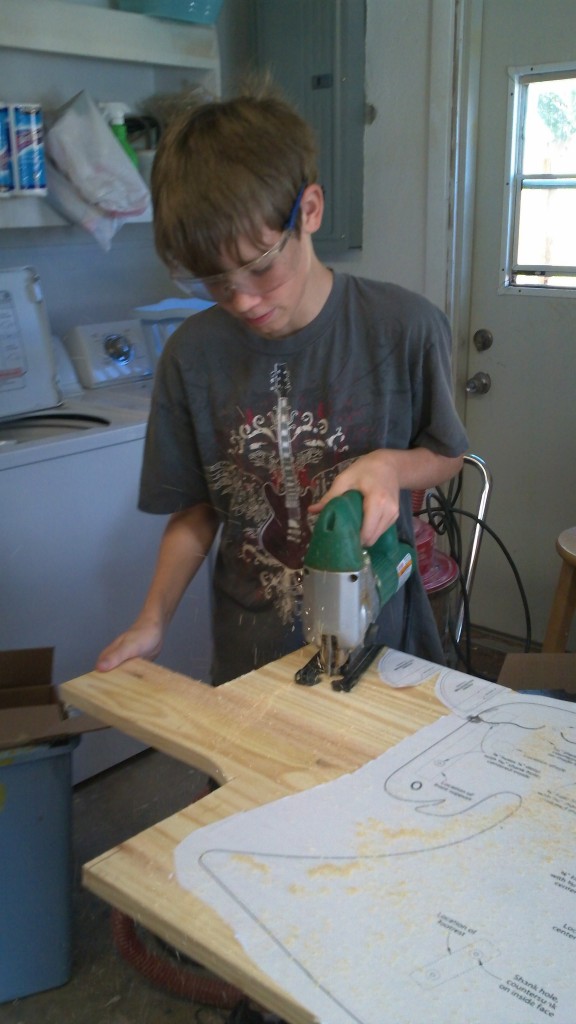 Since Dominic had used a jigsaw in his tech class at school, he wanted to show off his mad skillz. So, we spray mounted the plans to the board, and Dominic got right to work with my jig saw. First, he cut off the parts of the board that we had drawn out the smaller parts of the project on. I took those over to the band saw and made those cuts while Dominic cut out the sides of the horse outline.  We were using my holdfasts to keep the board down to the bench, and he was VERY energetic using the mallet to snug them down. 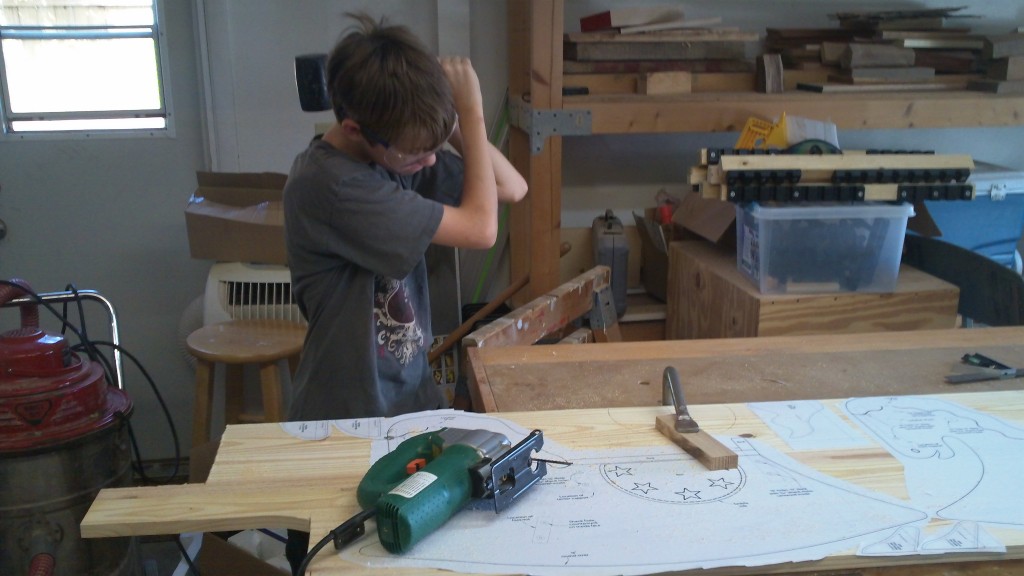 After we cut things out, I broke out my Ridgid spindle/belt sander, and we started smoothing out the rough cuts.  And, they were pretty rough, but that’s what the sander was for!  Dominic took to the sander with skill. I watched him closely at first, but he was so good, I was able to back off and take a few pictures. 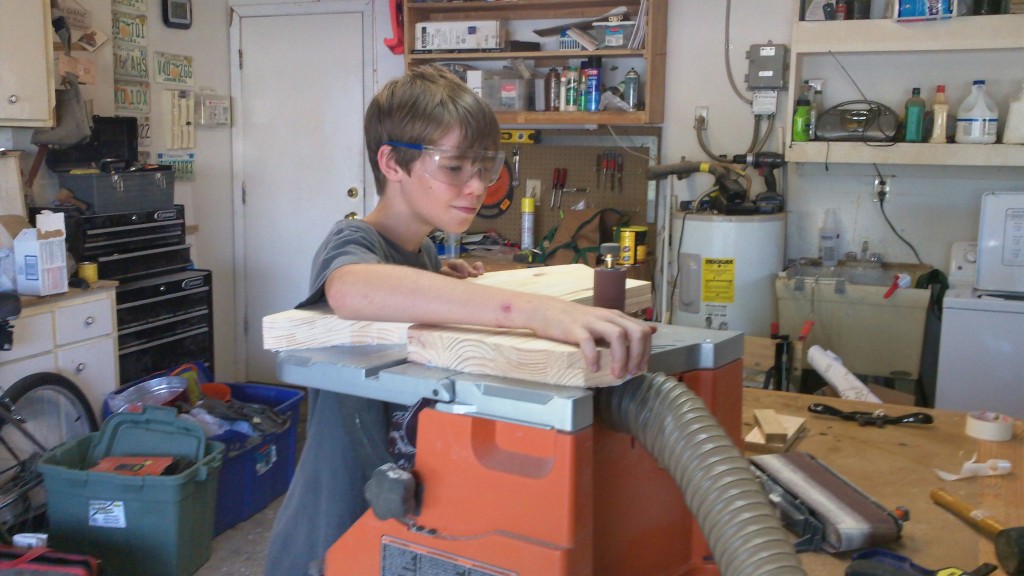 Did we get as far as we wanted to today? Nope. Dom had the idea we were going to have a fully assembled horse waiting for a finish on it. Ehh, what we do have is a stack of edge sanded, cut out pieces ready to have pilot holes drilled, surfaces sanded and finish applied. 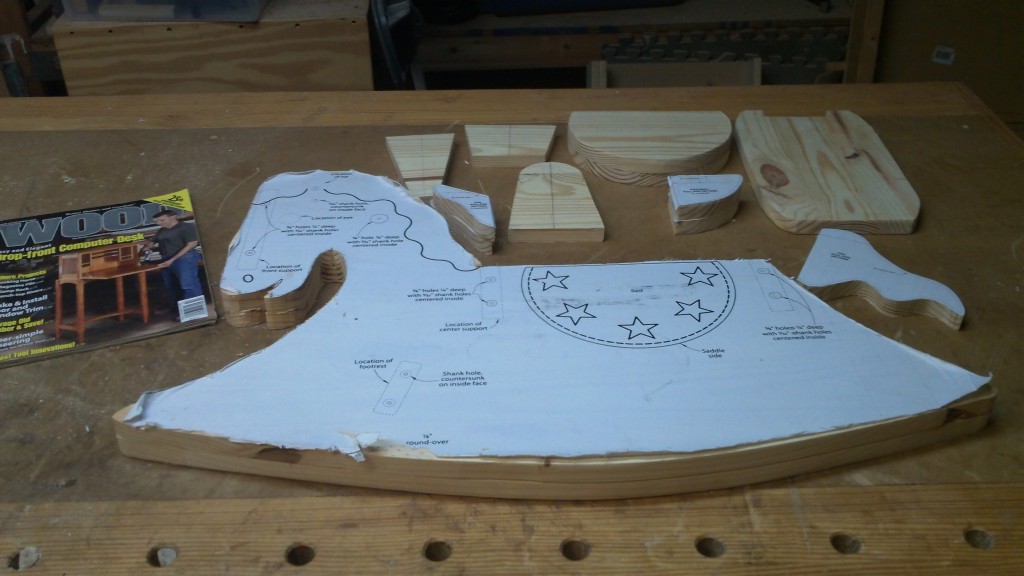 Dominic left the shop sweaty, covered in dust and energized by the build. I left with the pride a father feels when his son grows up and finds the joy in working with his hands. My buttons were bursting. It brought a tear to my eye…

Hey, Marc and Nicole… Having an infant is a great thing, and you will enjoy every minute of parenting a little one. But, when they get old enough to work in the shop… that’s when it gets GOOD!