What can I say about my maternal grandfather John Schwab that won’t make me tear up?  I loved the guy. I still do. He was one of the first heroes in my life. 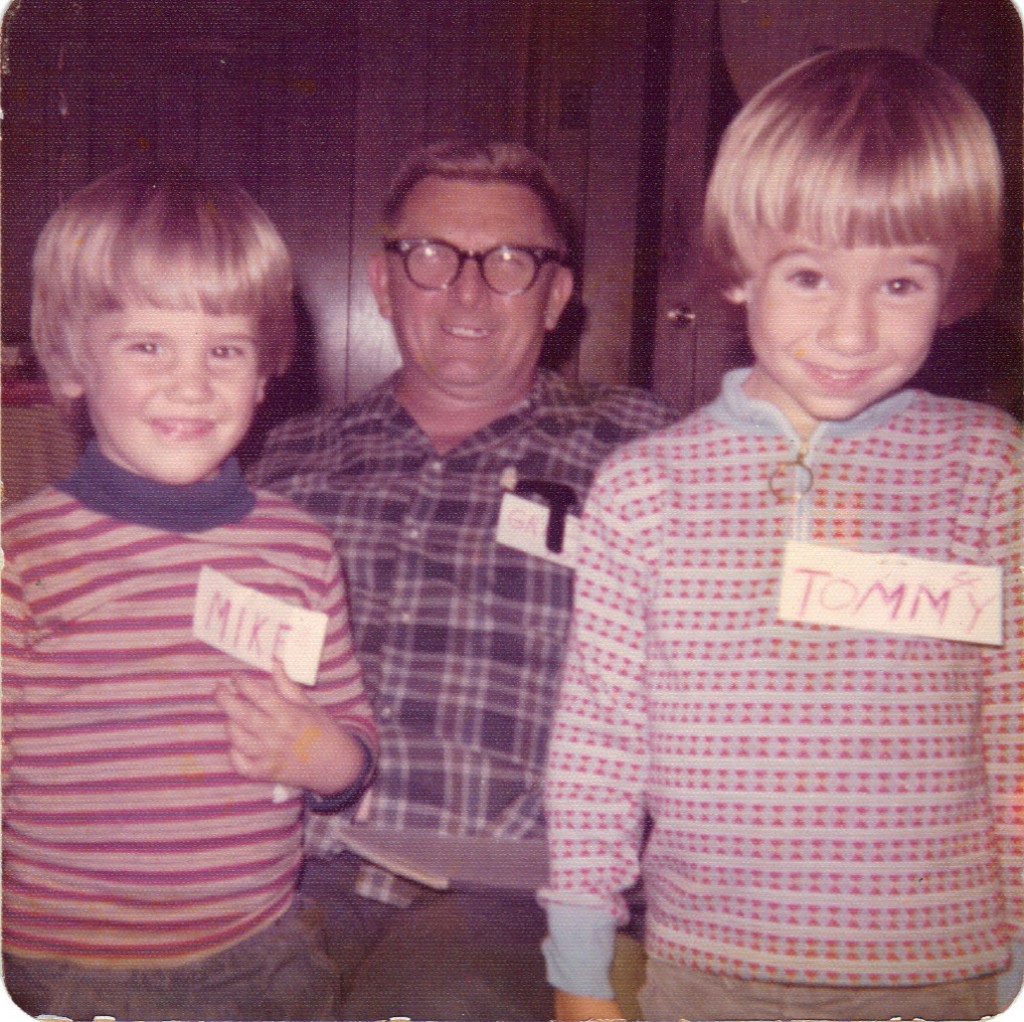 He was a very unassuming guy who lived in in Fairview, New Jersey, just across the Hudson River from midtown Manhattan.  He ran a dairy. The big treat for us was to sleep over at our grandparent’s house, wake up early and go to the dairy to ‘work’ with him.  My older brother would get up early and ride in with him, doing some deliveries.  My grandmother would drive my younger brother and me in later, once the sun was up and we had a chance to eat breakfast. My grandfather would do most of the work, selling milk and cream to people who walked into the dairy. We would either help him taste chocolate milk or ice cream. 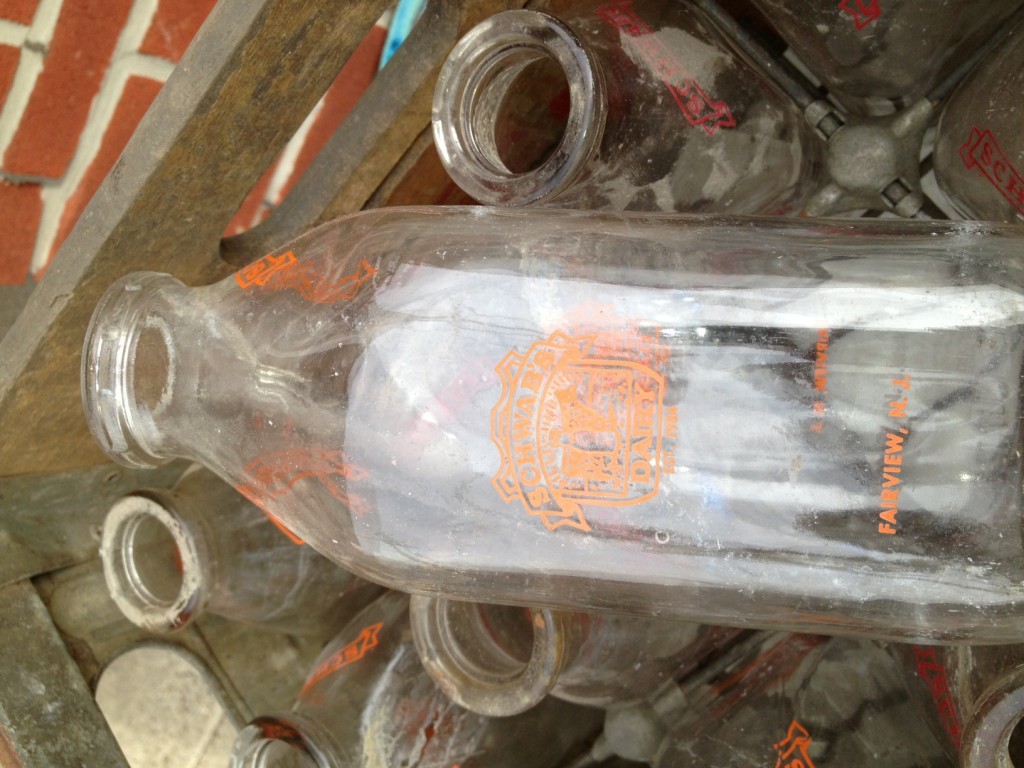 The other great memory I had of the dairy was watching him do his books. He would sit at a big desk on this stout wooden oak chair and count the money, occasionally stopping to give each of us a piece of Bazooka gum and read us the comics that came along with the pieces. He had a huge pile of old silver coins under his desk calendar – he was keeping them to give to each of us in the future.

My grandfather passed away in 1986 – the start of my senior year of high school. His loss was very difficult for me, as we were both very close. As my senior year went on and my grandmother was going through his property, I was given three very special things of his.  The first was his watch.  The only one he ever wore. The one I learned to tell time by looking at.  The second was one of his Schwab’s Dairy delivery jackets.  An Ike-style jacket with the dairy’s name embroidered on the back. The third was his oak desk chair from the dairy.

I very ham-handedly attempted to refinish the chair back in the summer of 1987 before I went off to college, and brought it with me.  I did my homework sitting on it, and it moved with me from Maryland to Florida. It was the chair we used at our computer desk for years, until one of the original rubber wheels delaminated on it, preventing it from rolling.  I put the chair out in the garage and vowed that one day I was going to repair it.  But, it sat out there, collecting dust for more than two years.

This weekend, I finally was motivated enough to head to the local home improvement store to buy a set of new wheels.  While I had the chair up on my bench, I started to notice some things about the old chair that I had never truly seen before… 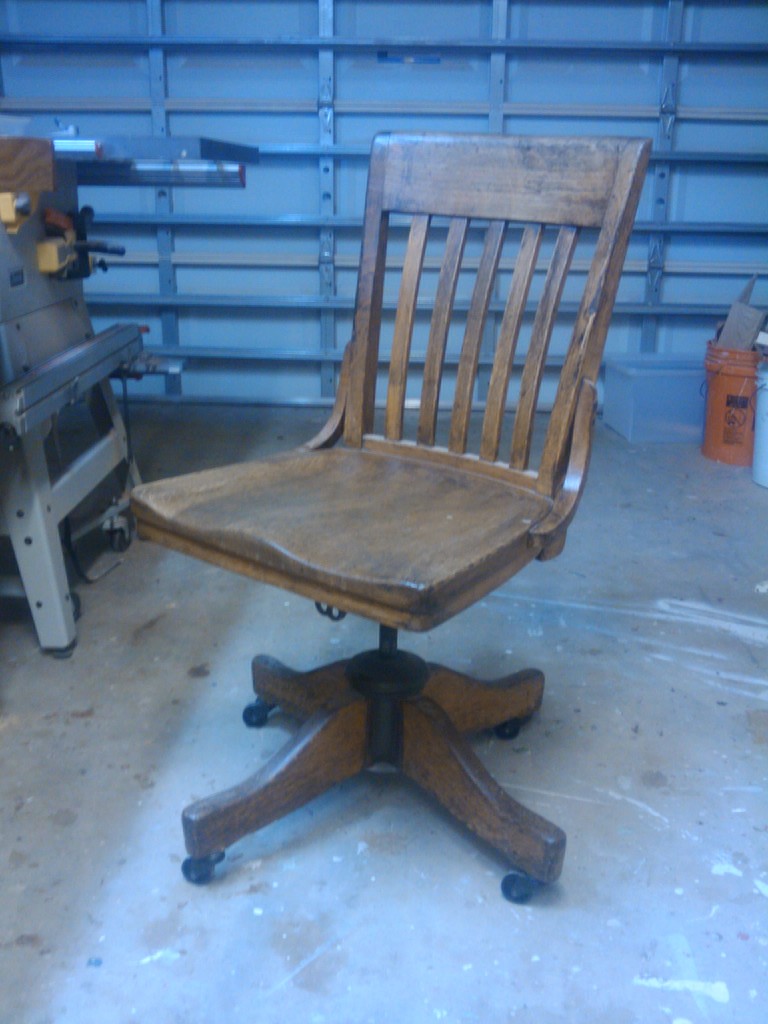 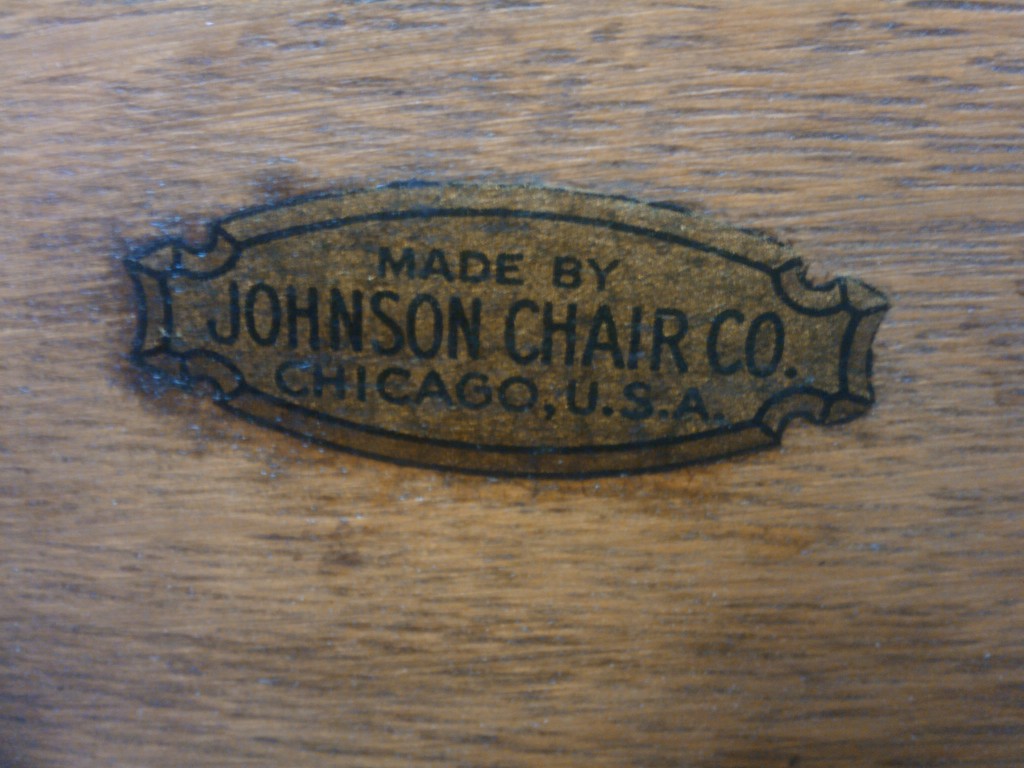 The chair has a beautifully sculpted seat that’s very comfortable to sit in. It also has two large side rails with five gently bent splat pieces that rise from the seat to the curved crest rail. There are two bent pieces that help to anchor the side rails to the seat. One of them has a split on it and lost its glued plug. 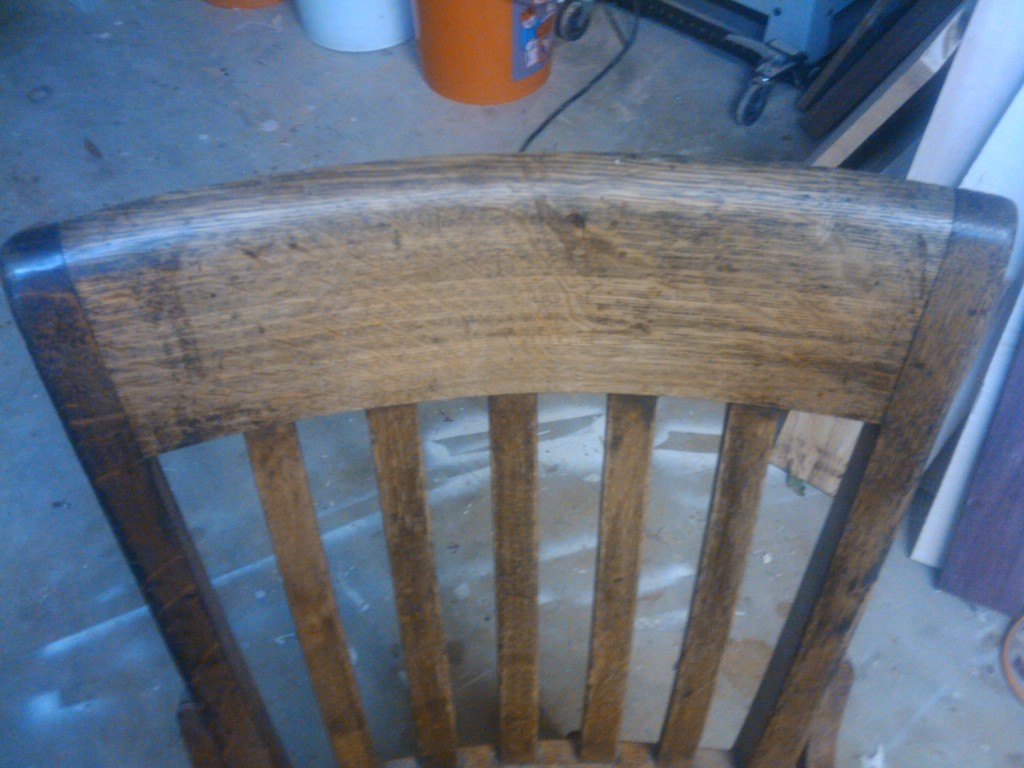 The undercarriage of the chair is very interesting.  When I had the piece flipped up on my bench, I could see how the legs were attached to the central column of the chair. The four legs radiate out from a cast iron base, which is threaded through to allow the height adjusting rod to screw up or down, allowing he user to set the height of the chair exactly where they want.  The action is smooth, and requires a little work to operate. But, once it’s set, it holds the adjustment very well.  The legs themselves are joined through a massive mending plate on the bottom of the chair, with beefy screws holding to the iron inner workings and each leg. The space between each of the legs is filled with a thin piece of bent oak, which slips into a pair of kerfs cut into the base of the legs. One of these is missing on the chair, but the three others are in very good shape. 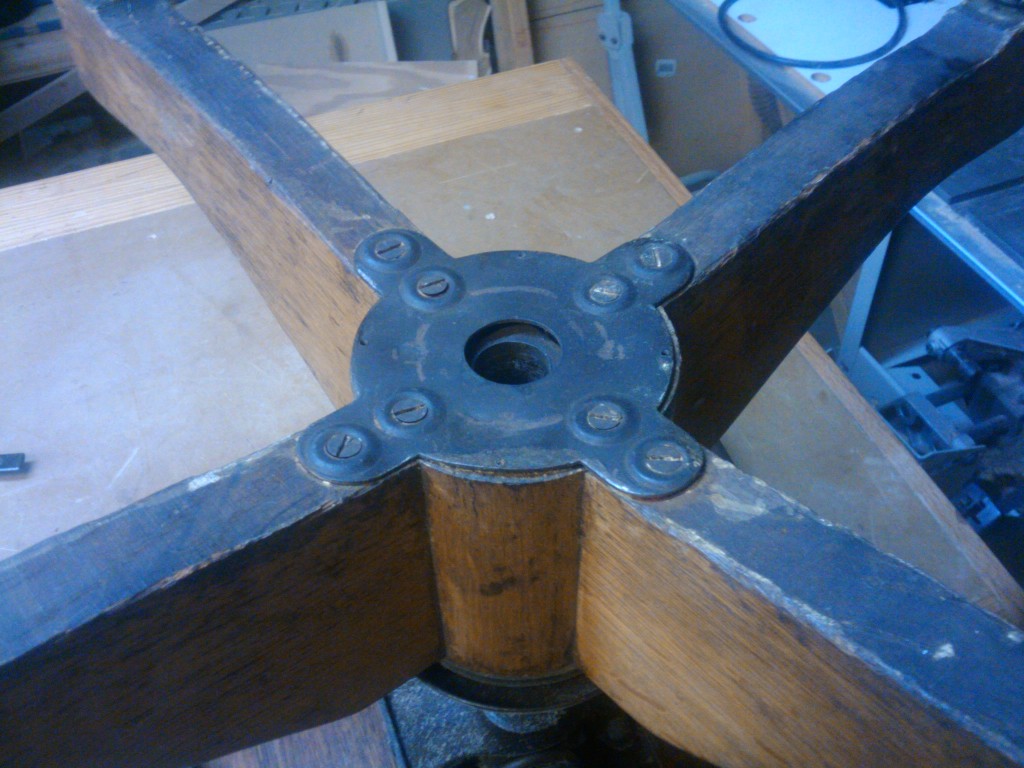 The seat adjustment control determines how easily you can rock the seat backward. It consists of a hefty iron handle that screws into the workings of the adjustment device.  Screw the handle in, and a coiled spring in the back gets stretched, making it more difficult to rock backward on the chair. I had never noticed how massive the control was until I had it up on the bench. 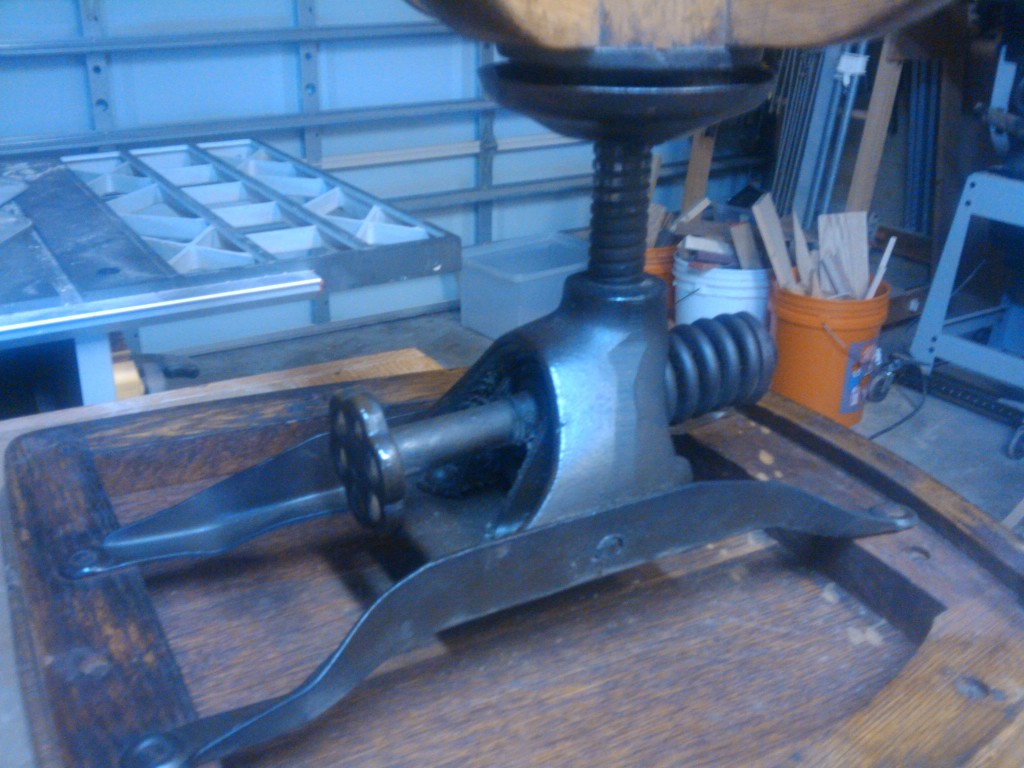 Once I fixed the broken wheel on the caster, I wiped all of the cast iron pieced down to clean them, and then wiped them again with a silicone lubricant to allow easy movement of the pieces. I also took the opportunity to carefully clean all of the dust off the piece and vacuumed the thing spotless.  After I wheeled it into the house, I made a decision. Something this important to me doesn’t belong out in the shop or at the home office… I am going to bring it to my desk at work and replace my 12 year old chair that’s getting more uncomfortable by the day.

And, when I’m sitting on the same chair my grandfather worked at, I’ll get inspiration to work harder to be more like him….

11 thoughts on “My grandfather’s chair”