The Tampa Bay area where I call home is the 19th largest metropolitan statistical area in the United States. Its subtropical environment allows for a wide and diverse population of plant and animal species to call the area home. And, since the last time the area took a direct landfalling hurricane was 1921, the plants – especially the trees –  in the area have had a long time to grow and mature.

And, when it’s time for those old trees to be removed, their usual fate is to be ground up and used as mulch in some flower bed.

But, that’s not always the case. Enter Viable Lumber. This organization, led by local woodworker Pete Richardson, is working to change the way urban trees are looked at and give them a far different fate.

It all started at Pete’s home, when an overhanging limb from a live oak – known half-jokingly as the ‘limb of death’ – had to be taken down.  The size of that limb was impressive, and, when the arborist told Pete that it was going to ultimately end up as mulch, Pete told him to leave it be. With a chainsaw mill, Pete was able to slab that massive limb and put the wood to use.

Today, Pete and a cadre of dedicated volunteers are working as a cooperative locating trees that are being cut down and rescuing the gorgeous wood contained within. 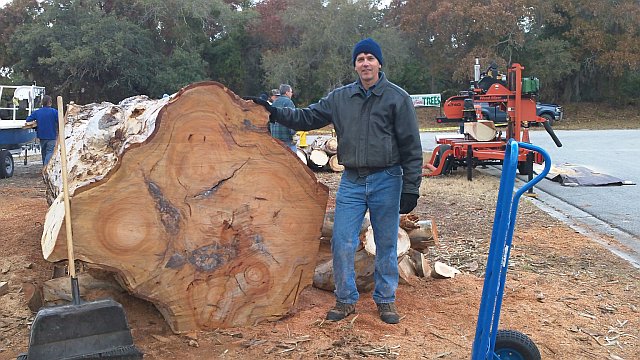 On Monday, he invited me to join the crew at a home in Tarpon Springs as they cut up a huge red eucalyptus growing in the yard.  When I pulled up, the crew was already hard at work with an enormous Wood Mizer band mill slicing the logs into huge chunks. The crew on hand represented a wide cross section of people from the woodworking field. Cabinetmakers, wood turners, and woodworkers of all kinds were represented, and everyone was eagerly waiting to see just how colorful the wood was going to be.

Steve Parker, the owner of the Wood Mizer mill, directed the action. The boards were hustled off to be stacked and their ends sealed with Anchor Seal to prevent checking.  Some of the pieces were being sawn for some specific uses. For instance, one of the volunteers turns special trophy baseball bats out of exotic woods for college and professional baseball players. There was a stack of the wood sawn to the specific dimensions needed for the task.

Sure, when dealing with urban lumber there’s always the chance that the saw will hit a nail, bolt or other metal object inside the board, ruining the blade.  That eventuality is planned for in advance,with the crew figuring they will ruin at least one or two blades per tree. “We have the spares on hand. If we go through the tree and don’t break a blade – that’s a bonus!” 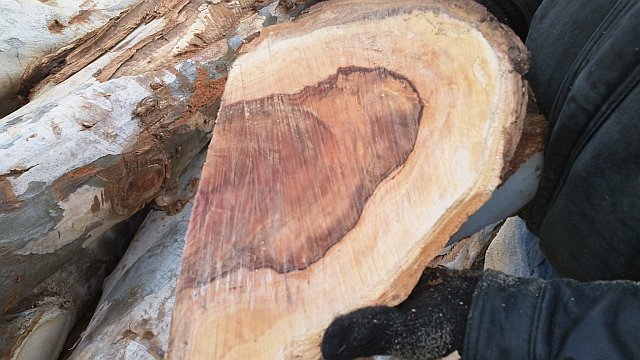 Even the scrap pile wasn’t going to go for waste, as many of the volunteers were coveting the choice pieces for small turnings, platters and other small but special items. “After we cut up a tree, there’s rarely anything left but the sawdust. Most of it is selected for small projects, and what doesn’t draw interest from woodworkers goes into fireplaces. There is little waste.” 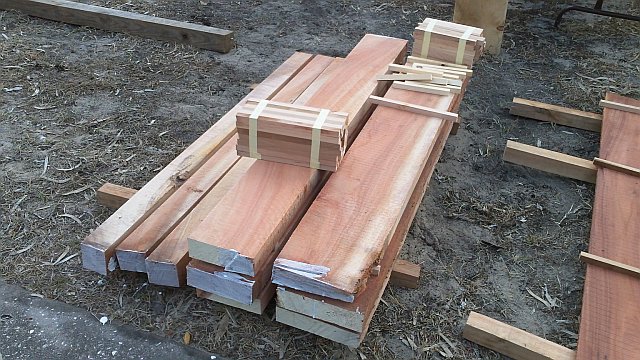 Right now, Viable Lumber is testing the – err – viability of the model.  Pete is getting the word out to local arborists, city maintenance crews and the power company to let them know about the service they provide. Most of the trees are hauled to a location where they can be cut at a more leisurely pace, larger trees will need to be slabbed on site. “Another thing we need to think about is our inventory. We’ve held off on marketing for the past few years in order to build an inventory of boards. Obviously, if someone came in and wanted to buy a significant supply of boards to mill flooring, we’d like to give them a few options and have enough to satisfy their order.”

Knowing this isn’t the only urban forestry and lumber operation in the country, Pete has been in touch with similar companies and organizations around the country. “I have people working for me as wood mules… they take some of our stuff to they are visiting, and bring back stuff when they return.” Pete smiled. “That would be another good story for your blog!”

3 thoughts on “Urban search and rescue”