When in the Course of human events, it becomes necessary for one people to dissolve the political bands which have connected them with another, and to assume among the powers of the earth, the separate and equal station to which the Laws of Nature and of Nature’s God entitle them, a decent respect to the opinions of mankind requires that they should declare the causes which impel them to the separation.

With these words, the colonial leaders in the British colonies on the east coast of North America told King George III to go take a hike, thank you very much, and declared that they were going to make their own country.

That happened way back on July 4, 1776 in a hot assembly hall in Philadelphia, Pennsylvania and took a great deal of courage to draft and sign. 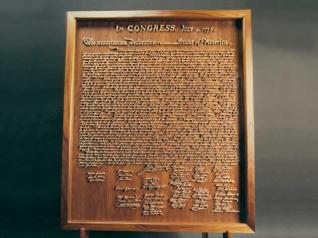 Then, there’s this version, which took skill and patience – and some courage – to build.  Woodworker Bill Thurlow took 580 hours spread over eight years to create this scrollsawn replica of the Declaration of Independence from 1/2″ thick maple.

This link goes into great detail of the construction of this incredible project.