During my classes, I was exposed to many different writers of classic English and American novels, plays and essays. Some were just awful – wretched books that I had to force myself to read or risk failing. A few words of advice – if you ever have to make the choice of being compelled to read Humphry Clinker by Tobias Smollett or having your flesh ripped by wild weasels, you might want to give the weasels a chance…

However, other things I had to read were very engaging. Pleasant.  By the time I was ready to receive my Bachelor of Arts degree, I had developed a fondness for the works of William Shakespeare. The Bard of Avon – also known affectionately as Billy the Pen – had a way of setting a scene, bringing his characters to life and engrossing you in the story.  Romeo and Juliet, Richard III, King Lear… Shakespeare was able to churn out classic after classic.  The plots of his plays still appear in slightly different forms in movies, novels and even television shows.

My favorite play of all was Julius Caesar.  Talk about a play full of tragedy, majesty, deception and betrayal. Almost sounds like one of those reality shows on TV today.  What really makes the play for me is the oratory.  Both Julius Caesar’s assassin Brutus and the play’s protagonist Mark Antony make rousing speeches at the Roman Forum.  Mark Antony’s stirring words ultimately sway the crowd against Caesar’s assassin, setting up the eventual downfall of Brutus.

The whole forum concept was critical in Roman society. Forums were established in larger Roman cities for people to gather for commerce, for intellectual debate, religious worship and for justice to be dispensed.

So, it should come as no surprise when gathering areas were established on the Internet, they would come to be known as forums.  There are forums that appeal to many different interests – automotive repair, fashion, cooking, home improvement, business and technology.

As woodworkers started gravitating to the Internet, many different woodworking forums began to spring up as well. At first, they were simple evolutions of ‘bulletin board’ services which had been around since the earliest days of what would eventually become the World Wide Web.  These forums have advanced tremendously over the years in sophistication, giving users access to a tremendous amount of information. 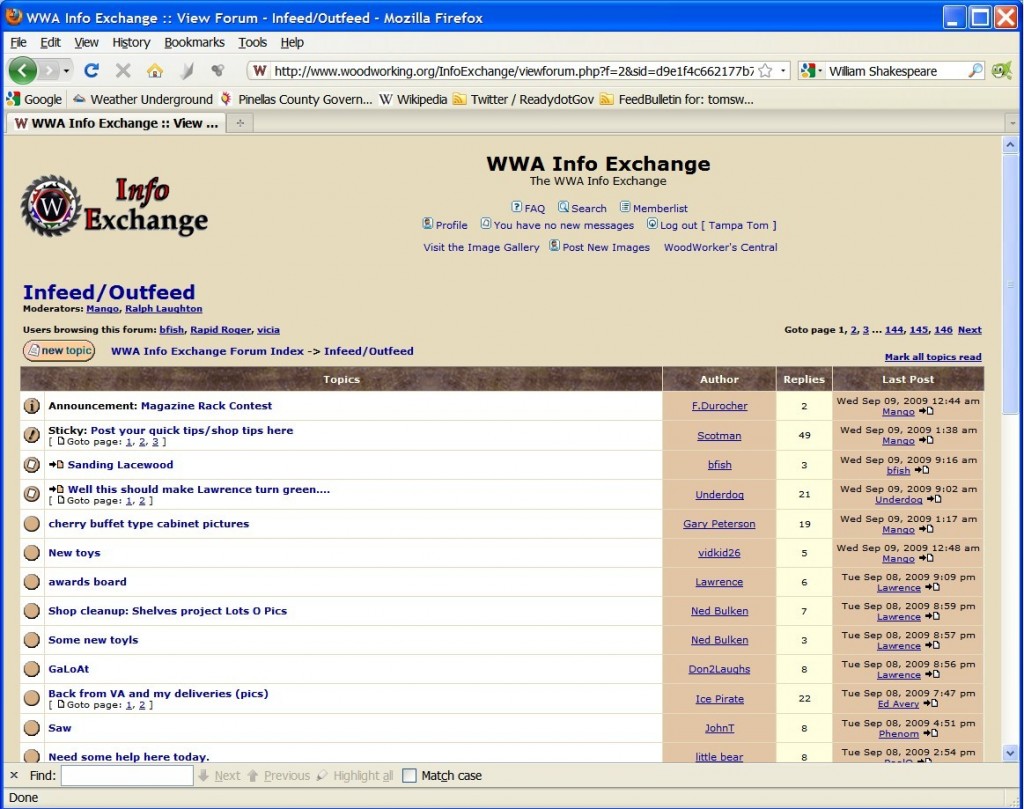 Some of the forums out there are tied to woodworking magazines.  These forums tend to attract their readers through their printed editions and focus primarily on topics covered by their contributors.

Others are run by tool manufacturers or vendors.  These are obviously focused more on the tools they sell, which gives users an excellent opportunity to get very tool specific answers to problems they may be experiencing.

Some are run by professional associations, woodworking schools or bloggers, which give a greater depth of information about current projects, trends or special offers to participants.

Finally, there are those which are just a little maverick.  In the early days of Internet forums, woodworkers kind of went their own way, establishing independent forums not beholden to an advertiser or other ‘parent’ entity.  Donations at this kind of site are usually greatly accepted!

These online forums are outstanding places to get your woodworking questions answered – sometimes in mere minutes.  However, you also have to understand that just as in the Roman forums, many people will be coming there to give you advice.  Each of the woodworkers who posts is coming from their own level of experience, set of tool preferences, methods of construction, etc.

While these boards are typically moderated for inappropriate behavior, don’t be surprised if  – say – your question on how to cut a mortise comes back with several different methods – and many vociferous supporters of each who  may seem a little strident in their support of their preferred method. “You fool!  You  MUST cut a mortise with a hollow chisel mortiser.  It’s the only way!”  “Forget what he said.  Develop your hand tool skills and chop them with a mortising chisel!”

Needless to say, when it comes to using these forums, it pays to have a bit of a thick skin and an eye to discern the level of expertise – and if they are trying to sell you something.

Oh, and it also pays to overlook some of the spelling and grammar mistakes on the posts.  Many are dashed off while glue is drying or on a quick lunch break.  Others are written by people with a firm grasp of woodworking techniques, but maybe not the best of writing skills.

But, hey, were you expecting Shakespeare to write a post?