No, this didn’t happen yesterday… but, every Mother’s Day, I’m reminded of a unique project I had to undertake for a neighbor.  It all started with a new kitchen range back in 2004… 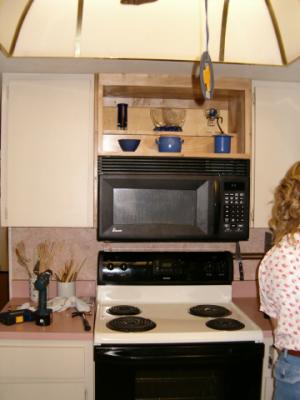 My neighbor Chris is a handy guy.  He’s been a sushi chef, has rebuilt carburetors and today cleans rugs for the local school system.  He’s a hustler, never allowing grass to grow under his feet.  So, it came as  no surprise that he was installing a new range in his home for his wife as a Mother’s Day gift.

I just happened to show up at the house as Chris ran into a huge problem.  He had taken out the old range and remembered that he had tiled under it a few years earlier when doing some other kitchen improvements.  Unfortunately, the new range had a higher control panel on the back, and it wouldn’t fit under the cabinet above.  What a bummer…

As he was contemplating major surgery on the range to make it fit, I had already consumed two of the beers he had offered me.  I could sit for hours and watch him work. Seriously.  My wife and Chris’ wife joined us at the dining room table, watching Chris try desparately to fit the too-tall range into the too-short space.  That’s when I opened my big mouth.  “I can build something for there.”

The room went silent.  Chris’ wife turned to me and asked, “Can you?”

“Great!” She said.  “We need it done before we all go back to work on Monday, though.  I can’t live without a kitchen…”

Boy, did I ever stick my foot in it.  I had never really built a cabinet before, nor had I selectively removed existing cabinetry to make a new unit.  This was going to be a real test.

And, early on Mother’s Day morning, Chris was knocking on my door asking if we could get ready to build.  We went to the local home improvement center and bought our supplies, then came back home.

At this point, we had already showered the ladies in gifts.  The next one was the offer that we would stay at home to work on the cabinet and the moms would be able to go to the beach together – without the kids.  Besides, Chris’ daugther was just about old enough to watch the three other little ones with some minor help…

The box was easy to build – just 3/4″ birch plywood and some maple edging.  In order to hide the electric hook up and display some of her Swedish glassware, we decided to build a ‘step’ into the piece.  Once it was built, we used a spray can of lacquer to finish the piece – it dried in a flash.

I had failed to realize how precise I needed to be when building the piece.  A horrible thought hit me as we took it over… What if it didn’t fit….

After removing the existing cabinet, we hoisted the new unit into place and it slid in beautifully.  Whew.  Chris drove screws into the studs and neighboring cabinets while I ran home to mill some molding for the sides of the piece.  Total time for the project was about five hours, and the results weren’t all that terrible to look at.

After we finished, I looked outside the window and noticed that the moms were out in Chris’ pool with the kids.  I took off my shoes and put my wallet, keys and cell phone on the cabinet.  I walked outside onto the pool deck shaking my head.  “What’s wrong?” asked Chris’ wife.

“There’s nothing left to do on the project!” I yelled as I cannonballed into the pool, to the surprise of the kids and the moms.  Chris pushed the new range into place, and had already started dinner for both families.

The display case didn’t last too long, though.  Their home was destroyed in a fire seven months later and the display case was broken out and heaved into a dumpster.  I still look back fondly at that project and the manic Mother’s Day we spent with our good friends.