When a new child is born, many woodworkers will go out of their way to craft a cradle to hold the newborn. It’s seen as an honor and a privilege to build the first place where a new person can rest his or her head.

But, what happens at the end of that life? Building a coffin or urn to hold the remains of a beloved family member is no less of an honor or a privilege. And, just as with cradles, the woodworker’s imagination and sense of design can play a tremendous part in shaping that coffin. 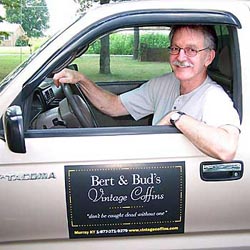 Roy “Bud” Davis is a woodworker who truly takes this to heart. At his company, Bert & Bud’s Vintage Coffins, Roy builds classic, artistic and some way out there coffins for his pre-need customers.

For Roy, working with his hands is a family trait. “I come from several generations of people who worked with their hands. “My mother was an expert seamstress and also decorated wedding cakes and birthday cakes that rivaled those done by upscale professionals. Her father caned chairs and she had two brothers, one a master carpenter and the other a master cabinetmaker. On my father’s side, his father was a carpenter and his grandfather was a blacksmith. And believe it or not, my dad’s stepfather was an undertaker. But I can’t claim that I learned anything about woodworking from any of them.”

Roy’s first woodworking experience came in 1962 when he decided to build a cabinet to hold his hi-fi stereo components. While this was quite an accomplishment, he waited 30 years to get back into the craft. That’s when he started building half-scale coffins to commemorate the lives of lost family members. “While working on those commemorative coffins, I thought it would be a great idea to build my own coffin as a work of art and that led me to think, ‘well, why shouldn’t everybody’s coffin be a work of art?'” 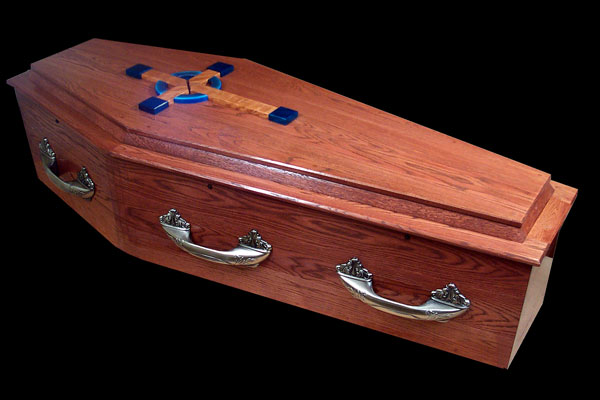 Roy has yet to build his own coffin, but that hasn’t stopped him from building others. In fact, he started building classic ‘toe pincher’ coffins to sell to Civil War reenactors. “So far, I have sold only one to a reenactor,” he said, “but I have had a lot of clients who have ordered these for their own use.” And, no, Roy properly pointed out that the ‘toe pincher’ form isn’t just a European convention – it was the most popular style of coffins in the United States from colonial times into the Civil War. 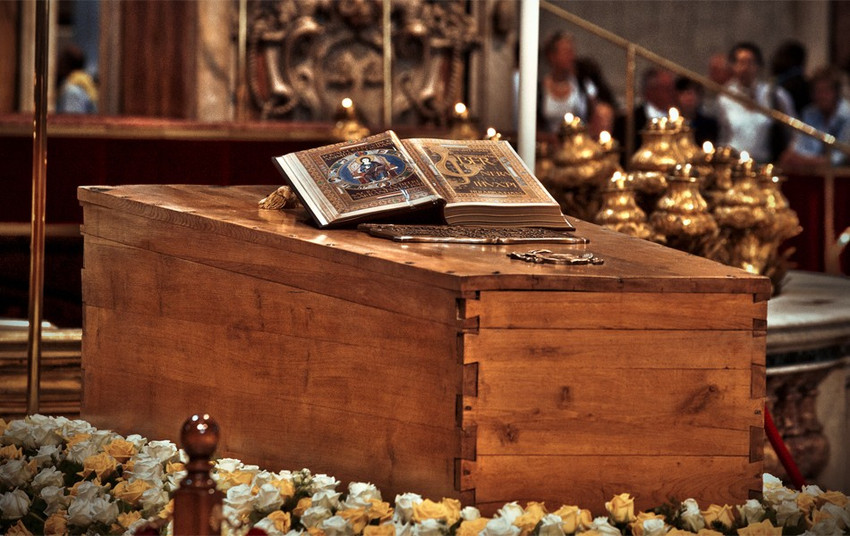 Another event which has affected Roy’s business was the passing of Pope John Paul II in 2005. People around the world were moved by the solemn ceremony, and woodworkers were amazed by the austere coffin the Pope was carried in. “Who could pass up the opportunity to work on a piece with such simple but strong design?” In recent years, reproductions of the Pontiff’s coffin have accounted for about half of his sales.

While these time-honored designs have been a mainstay for Roy, some of his clients have requested interesting and unique designs. “I’ve done a beer bottle coffin for Maxim magazine that was offered as a prize in a nationwide contest; a steamboat coffin for a feature-length film for the Public Broadcasting system (it’s now owned by an actual Mississippi riverboat captain) a dollhouse coffin and a window seat coffin. I never want to shy away from a design or construction challenge.”

This bold design process also spills over into the cremation urns Roy builds. One design that truly stands out is a piece shaped like a martini glass. “It was made for the mother of a friend of mine. He and I had several conversations about her; he sent me photographs of her in her prime years and told me how she had been a prominent party hostess in Washington, DC in the 1940s and ‘50s. And, she loved martinis. That’s how the process usually goes for all of my urns and for the coffins, too.”

Many woodworkers might be anxious about building a coffin for themselves or their loved ones because they may not believe that they have the necessary skills to build such a specialized piece of woodworking. “A coffin is really just a big box. The joints have to be tight, construction must be sturdy, but the coffin should also look light and graceful.”

While Roy will build a coffin for any customer, the one thing he cannot do is provide coffins on very short notice. “If someone’s relative died suddenly, I wouldn’t be able to help them. I keep no coffins or urns in stock. A kit coffin or plain toe-pincher coffin takes 7 to 10 days to build. Some of the fancier ones can take a couple of months. I build the coffins one at a time in order of when the deposit checks come in. So some customers have to wait until I finish the orders ahead of them. Most often they only have to wait 2 or 3 weeks.”

To help address this pre-need requirement, Roy has built several coffins which can double as window seats, table bases or book shelves. A new model, built from the same style box as the Pope John Paul II replica, serves as a tall clock until needed needed for its intended purpose.

While some people may see this as a macabre practice, Roy considers it to be an honor to be part of the grieving and life memorial process for a family member. “A man described the funeral of his mother who was buried in one of my plain pine toe-pinchers. They filled her coffin half-full of aromatic red cedar shavings, placed her on them and covered her with a blanket made of her Irish clan tartan. Her grandsons carried her on their shoulders while a piper piped her to the grave. It’s very rewarding to play a small yet significant part in a beautiful ceremony like that.”