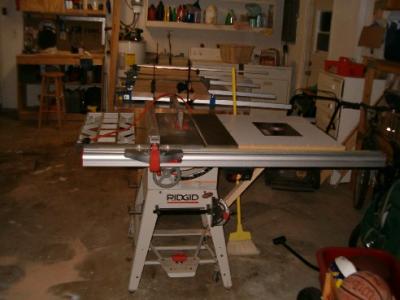 My first table saw was a Delta benchtop model. It worked OK for a year and a half, but, as I quickly discovered, a 12″ rip capacity is really too puny to get serious work done. So, back in 2001, I upgraded to the Ridgid table saw I had been drooling over at the Home Depot. Some of the features that caught my attention were:

There are a few downsides to the saw.

Of course I have tricked out my saw. Besides building many panel cutting, tapering and other shop-made jigs, I added an Osborne EB-3 miter gauge. That sucker really cuts spot-on angles, has a flip-down stop to allow consistent cut lengths and allows a lot of support for stock while cutting. 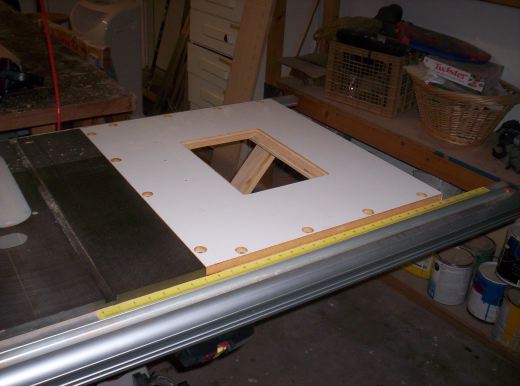 I also replaced the left cast iron wing with a home-built router table. I routed it out to accept a Rousseau router plate (which supports a Freud FT 2000 router). I can use the saw’s rip fence as a fence for the router table, which allows me the same micro-adjustability that benefits me using the saw blade.

Since I may have to rout and rip moldings, I also have an auxiliary router table top that I can set up on a Black and Decker Workmate so I can dedicate a station to each task.

While you can no longer buy the saw brand new from Home Depot, you can get the follow on model – the 3650 – which has many of the same rock solid features found on my saw. While I do dream about upgrading to a high-performance cabinet saw, I have found my saw to be an effective performer that has yet to let me down.