Prediction is very difficult, especially if it’s about the future. – Niels Bohr 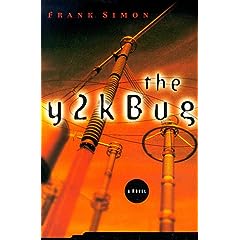 Ahh, who can forget the heady days of late 1999? The dire predictions of mass hysteria as computer systems crashed around the world. Cults foreseeing the end of civilization and the beginning of the ‘end times.’ Economists hedging their bets on an economic collapse the world hadn’t seen since the Great Depression.

Imagine everyone’s relief when January 1, 2000 rolled around and the world didn’t go into the tank.

If you think the people in the late 1990’s were the first to make predictions of what the new millennium was going to look like, you’d be wrong. People have always looked ahead, based on their observations, and tried to foresee just what the future would be like.

I recently came across a .PDF of an article written in a 1950 edition of Popular Mechanics called Miracles You Will See in the Next 50 Years. Wow. This was some real Buck Rodgers kinda stuff. Rocket planes that scoot people across country in less that two hours. Shopping by video phone. Solar energy providing cheap, reliable electricity. A veritable bonanza of clean, efficient life in a technological wonderland…

Who am I kidding? The description of life in the year 2000 sounded soulless, sterile and – in many ways – frightening. Here are some of the predictions that made me stop and say, “huh?”

Doesn’t sound like a place where anything is too terribly permanent or personal. That carries through to the home and furniture as well: 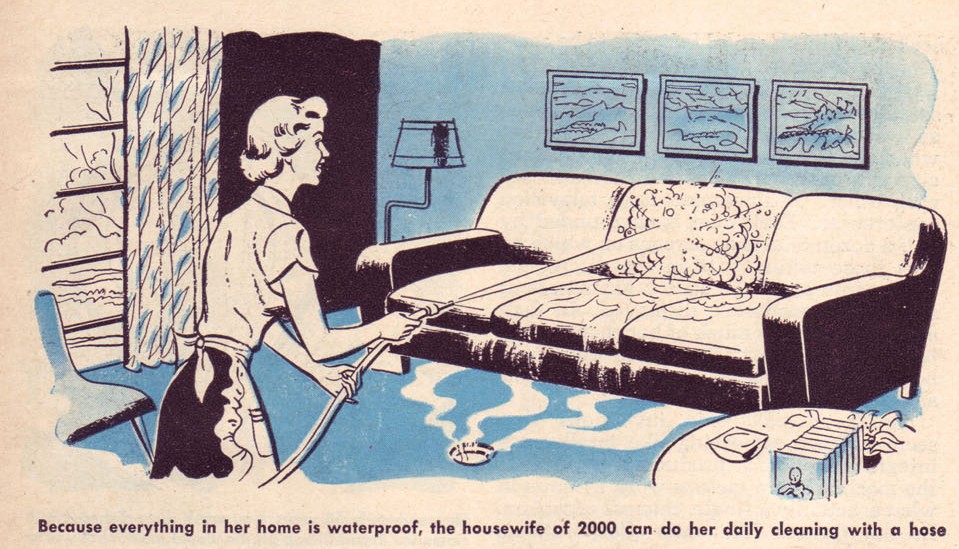 Later in the article, we see a cheery Mrs. Dobson hosing out the inside of her home – furniture included -to get that nasty dirt and ground-in grime out. The water and detergent disappear into the main central drain, a blast of hot air dries everything and the home is once again sparkling new.

Of course, none of these predictions have come to pass. However, in the 1950’s, we were sure that science would solve all of our problems. Plastics, mass production and advances in technology were supposed to eliminate all of the toil and hard work from our daily lives.

If that’s the case, why did woodworking survive, and why is it a thriving hobby for hundreds of thousands?

It turns out that we can find a historical analog. In the late 1800’s, the Industrial Revolution was changing the landscape everywhere. Mass production of everything was becoming the norm, and that included furniture. Factories could spit out ornate spindles and table legs at alarmingly fast rates, catering to the Victorian fashion sense of the day. Layers of ornamentation could hide shoddy or underbuilt joinery.

But, there were those who didn’t want to go along with the mechanized flow. In

England and the United States, such notables as William Morris, Gustav Stickley and Edwin Lutyens were driving furniture design into a more craft, hand made aesthetic. Even though they used machinery for some tasks, the furniture spoke boldly to strong lines and the skill of the craftsman. Frilly ornamentation was abandoned nearly altogether in the Arts and Crafts movement, with the new style playing on exposed joinery as a design element.

These pioneers saw a different future than was being offered, and, today, their work is prized for its clean lines and bold showcasing of structure.

In the late 1960’s and early 1970’s, there was a similar renaissance in woodworking. The counter culture movement was rejecting all things technological, and some very creative minds, such as Sam Maloof, James Krenov, Tage Frid , George Nakashima, Wharton Esherick and Art Carpenter came into their own. Magazines such as Fine Woodworking encouraged the average homeowner to try his or her hand in this time-honored craft.

This handbuilt school of design brought with it increased innovation to allow the inexperienced craftsperson to build custom furniture. David Keller perfecting the first through dovetail jig. Delta pushing innovation in table saws. The adaptation of new industrial joinery technology into the home workshop with such items as the biscuit jointer, pocket hole jigs and the Domino.

Not all of these innovations had shown themselves in high-tech tools. Companies such as Stanley and Record, who used to make the hand tools craftsmen relied on, were replaced by forward-thinking outfits such as Veritas and Lie Nielsen. The hand tools built there are, in many cases, an evolutionary leap above the old styles, and will serve their owners for generations to come.

This new rise of woodworking timed perfectly with the advent of the Internet. Today, many techniques, tools and materials are just a click away, and dozens of lively woodworking forums allow a free exchange of information to even the most far-away places.

So, technology has definitely provided a miracle of some sorts, even if it wasn’t exactly as envisioned back in the 1950.