Andre Roubo is a well-known 18th century French woodworker whose work has inspired thousands of workbenches. However, his masterwork L’art du Menuisier, he had plans for more than just his workbench. 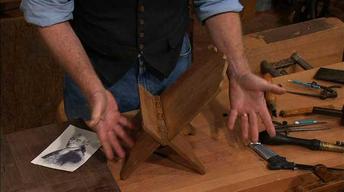 Roy Underhill of the Woodwright’s Shop shows the plans that Roubo had drawn up for a bookstand made of a single board. The interesting part – the wooden knuckle joints allow the pieces to pivot while never being separated.

In his own unique way, Roy shows how this is done with simple hand tools. It’s a must-see.