Very few people like what’s going on at Capitol Hill these days. Gridlock and partisan bickering seem to be the rule, not the exception. But, you can’t deny something very important… the Capitol is a very historic building, and the furnishings found inside are pretty impressive, too. 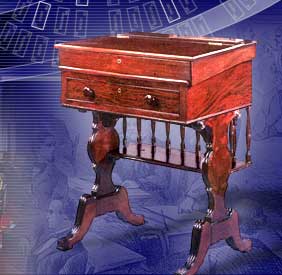 Of course, things were different back on August 24, 1814. That’s because the British Army was setting fire to the Capitol, the White House and a bunch of other historic structures while sacking the young nation’s capitol.  Once the British left, buildings had to be rebuilt and furniture replaced. That’s where we pick up with the story of the current desks in the Senate Chambers. New York cabinetmaker Thomas Constantine was commissioned to build 48 new Senate desks for the chambers, and he delivered them in time for the re-opening of the chambers in 1819.

Today, those original desks, plus 52 similar ones for states which entered the union after the war, occupy the current chambers.  This site offers the history of these impressive desks, and even shows a 3D rendering of how these desks were modified through the years. An interesting read.