Yesterday, the United Kingdom commemorated Battle of Britain day – the anniversary of the day of heaviest fighting between the Royal Air Force and the Luftwaffe during the crucial Battle of Britain. Had the RAF faltered and not held its ground against the Nazi air force, the history of the world would have been very different.

After the battle, the RAF realized they need a way to get more high-performing aircraft into the air as cheaply and efficiently as possible. While the Hawker Hurricane and the Supermarine Spitfire were modern, capable aircraft, they were made out of precious aluminum and had to be assembled in specialized factories. 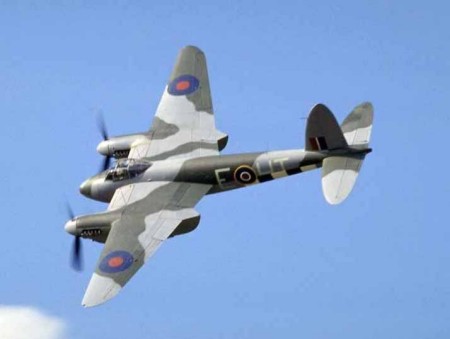 That’s when the de Havilland aircraft company came up with the idea of the Mosquito. This multi-role aircraft handled a great deal of assignments – fast bomber, fighter-bomber, night fighter, torpedo bomber, maritime patrol, transport and reconnaissance. What also makes this plane unique is that its fuselage was made out of wood.

That’s right. The plane’s body and wings were made from plywood and wooden laminations, giving the plane some impressive strength.  The plane held its own against more advanced all-metal planes operated by both the Germans and the Japanese.  Herman Goering, the commander of the vaunted Luftwaffe, even remarked:

It makes me furious when I see the Mosquito. I turn green and yellow with envy. The British, who can afford aluminium better than we can, knock together a beautiful wooden aircraft that every piano factory over there is building, and they give it a speed which they have now increased yet again. What do you make of that? There is nothing the British do not have. They have the geniuses and we have the nincompoops.

The museum offers visitors a chance to see this game-changing plane up close to appreciate the craftsmanship of these craft and tells the story of how the Mosquito helped turn the tide of World War II.

One thought on “Link of the week”