There are three things most woodworkers never want to see happen in their shop.

One would be an accident where someone got seriously hurt.

Another would be a theft of tools.

And, probably the worst of all would be a shop fire. In most shops, you will find plenty of combustibles.  Wood, sawdust, planer shavings, finishes… the works.  Add to that the fact that many shops house a serious investment in tools and are also attached to the living area of a home, and, well, let’s just say that’s something no one wants to deal with. 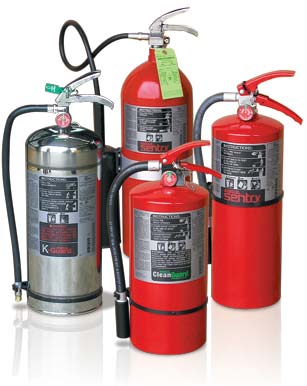 To help prevent such a catastrophe, many woodworkers consider investing in a fire extinguisher… something to keep handy to extinguish a fire should the worst happen.  But, which ones are best on which fires?  When should you use one and when should you run to call for the fire department?  Where’s the best place to mount one?

To help make sense of fire extinguishers, I went to the best local source I could find – my local fire department.  The City of Largo, Florida’s fire department provides fire suppression, inspection and education services to the more than 75,000 residents who call my town home. I met with Deputy Chief James Warman, a fellow woodworker himself, who gave me the rundown on fires and their causes. 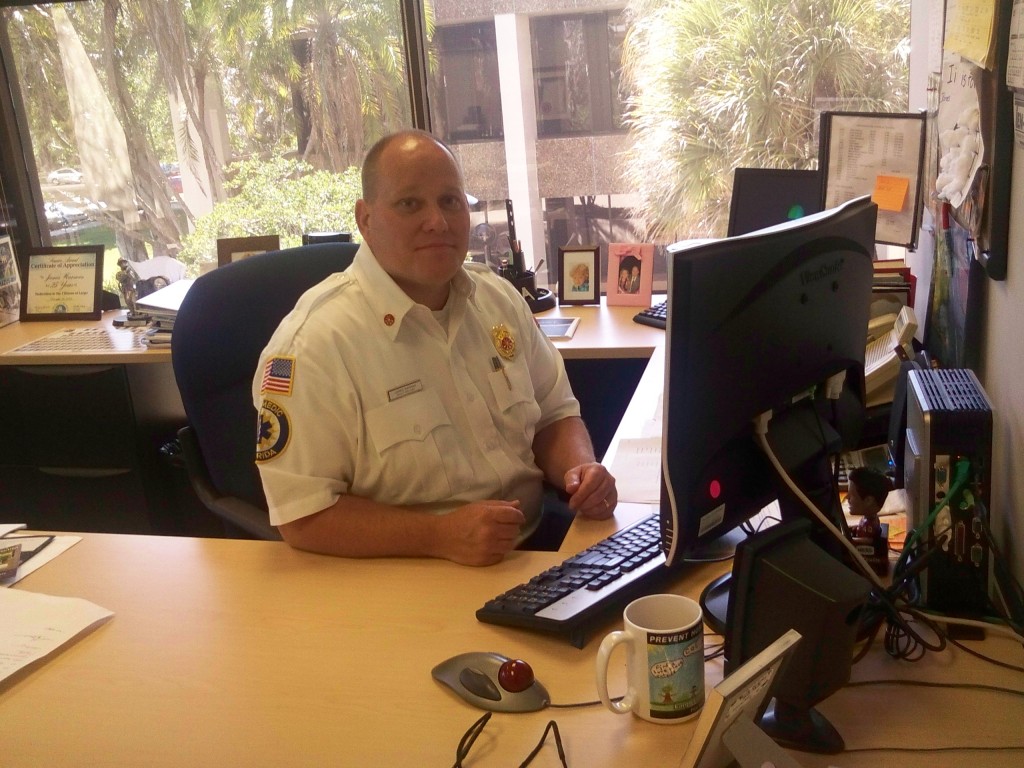 First, you have to know a little bit about fire.  It takes three things to get one going.  Heat, fuel and air – oxygen, to be specific.  If you cut one of these legs out from under any fire, it will be extinguished.

When it comes to what’s fueling the fire, you have to brush up on your ABC’s.  There are three main ‘classes’ of fires that can be faced in a typical workshop.

Class A fires are fueled by any combustible source that leaves an ash when burned. (Yes, think A for ash to remember this one)  This could include wood  (sawdust, planer shavings, etc), cardboard, cloth.. your basic fire that you think of most frequently.

Class B fires are fueled by flammable liquids.  (Think B for the barrels you might carry these liquids in) Finishes, thinners, oils and paints fall into this category.  Putting water on a class B fire is about the worst thing you could possibly do, as the water aresolizes the liquid, expanding the fire.  Don’t believe me? Watch as the Mythbusters show how it works.

Class C fires involve electricity, and have their own concerns…  you don’t want to use anything conductive (like water) to fight them.  So, if that overloaded circuit decides to ignite a fire, you have to use something that won’t hurt you to put it out. (Remember that C also stands for current…)

There are also class D fires which involve burning metals.  Since the average home workshop won’t have a ready supply of something like elemental sodium lying around in quantity, we’ll leave that for the industrial users.

Since you want to react quickly in the event of a fire, there’s no time to waste trying to determine what’s burning.  To make your decision easier, it’s best to select an ABC fire extinguisher for the shop.  One of the most effective is filled with dry chemicals.  Besides working on all commonly-seen fires, these are also some of the most economical choices out there on the market.

“An average 10 pound dry chemical ABC extinguisher is a great choice for a home workshop. It’s going to do a good job on the smaller fires you could see in a shop,” said Chief Warman.  Some of the other rules of thumb to keep in mind are to mount the extinguisher to a wall (if you just set it on a shelf, you will push it to the back and not be able to find it when you need it), mount it near a doorway leading out of your shop (this way, the fire can’t get behind you if you need to make a very hasty exit) and use the extinguisher on fires about as large as you would expect to find in a small wastepaper basket.  “Any larger, and you could be in a lot of trouble.  At that point, get everyone out of the structure and call for the fire department.”

And, no matter how large the fire, even if you are able to put it out with your extinguisher, you should still call the fire department just to make sure nothing is still smoldering. “We get called out to a lot of fires where the person thought they had put the fire out with an extinguisher, but it flares up again hours later.” 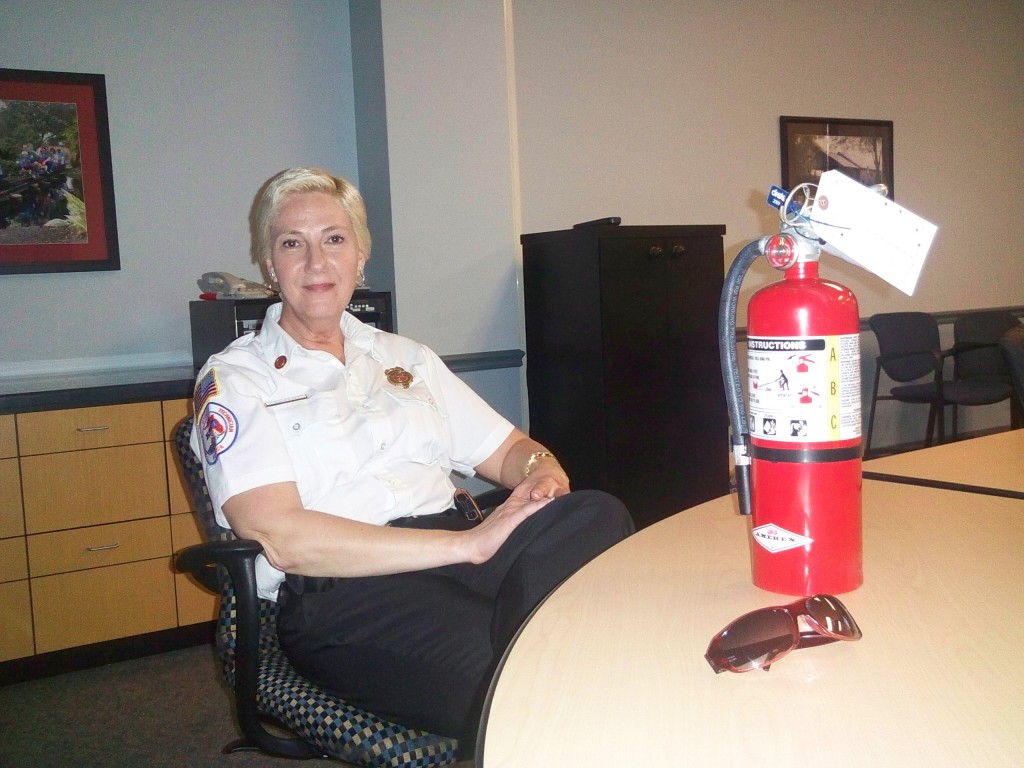 Learning how to properly use an extinguisher is a simple yet critical step in the process.  I met with Jeanine Green, the department’s public education specialist. She showed me the sophisticated Bullex laser based fire extinguisher training system and explained the process using a simple to remember word… PASS.

Pull the pin. Almost all fire extinguishers use a safety pin to prevent accidental discharge.  And, you would be surprised how many people – in a stressful moment – forget this first simple step. 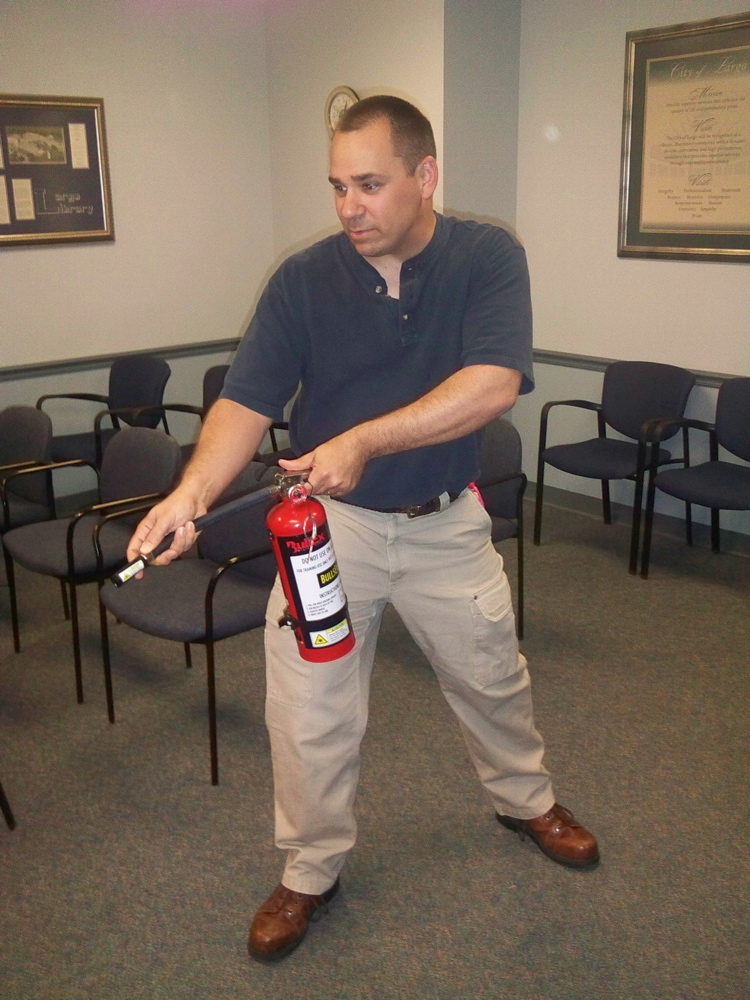 Aim the extinguisher. Either your extinguisher will have some kind of hose or just a small nozzle right by the handle.  Be sure to point this at the base of the fire, not the flames.  “Remember,” Jeanine said, “the fuel for the fire is at the base.  You want to cool that down and cut off the air. Shooting at the flames isn’t going to do much.” 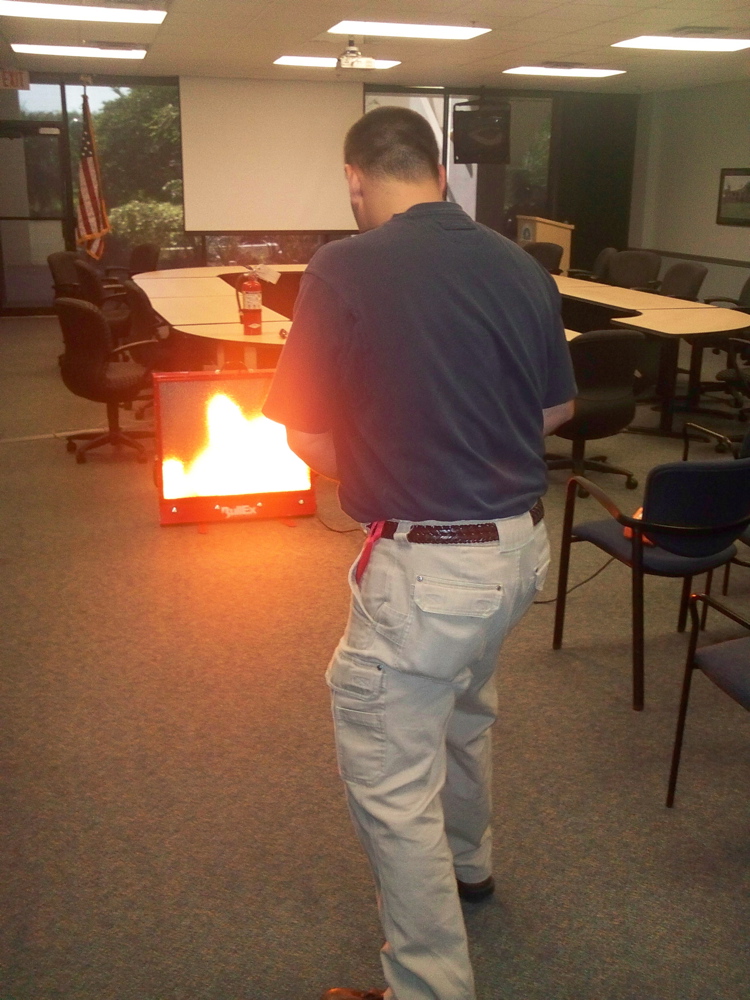 While this information is helpful, both Jeanine and Chief Warman were very clear about the most important point of all.  When it comes to fighting fires, the easiest ones are those that never burn.  Take the time to clean your shop, unplug tools when not in use and store your finishes and other chemicals securely. “We love when people come to visit us to learn about what we do,” said Jeanine, “but we don’t want to have to come to your home during an emergency if it can be prevented in the first place.”